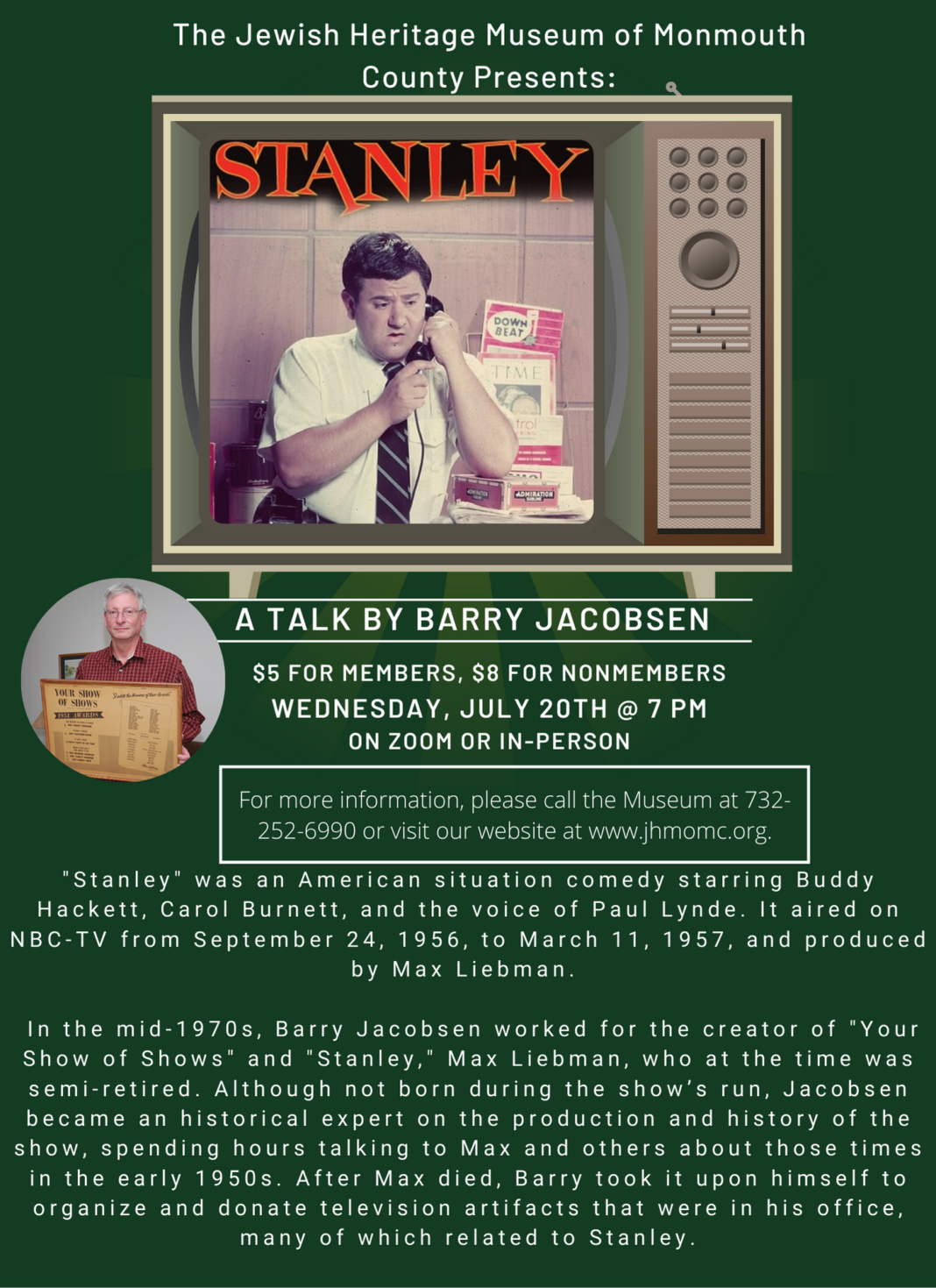 The Jewish Heritage Museum of Monmouth County presents a discussion of Stanley (Kinescope), 1956 with Barry Jacobsen on Wednesday, July 20th, 2022
@ 7:00 PM. This is an in-person and Zoom program. Admission for this discussion is $5 for
members and $8 for nonmembers.
For more information or to make a reservation, please call the Museum at 732-252-6990 or visit our website at http://www.jhmomc.org.
“Stanley” was an American situation comedy starring Buddy Hackett, Carol Burnett, and the voice of Paul Lynde. It aired on NBC-TV from September 24, 1956, to March 11, 1957, and was produced by Max Liebman. Stanley was a sitcom you have probably never heard of, but it is an example of one of these live sitcoms that aired for 19 weeks on NBC and featured a host of talents. The titular role was performed by comedian Buddy Hackett in his first leading role. 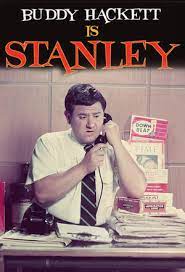 A 23-year-old Carol Burnett, in her first regular role, plays his girlfriend Celia on the show. Among the show’s tiny writing staff was comedy legend Woody Allen, who was no doubt brought on by the show’s notable producer, Max Liebman. During his talk, Jacobsen will show some of those artifacts along with original kinescope clips of the TV program and share insights into the show’s creation and personalities.

In the mid-1970s, Barry Jacobsen worked for the creator of Your Show of Shows and Stanley, Max Liebman, who at the time was semi-retired. Although not born during the show’s run, Jacobsen became a historical expert on the production and history of the show, spending hours talking to Max and others about those times in the early 1950s. After Max died, Barry took it upon himself to organize and donate television artifacts that were in his office, many of which related to Stanley.

Funding has been made possible in part by a general operating support grant from the New
Jersey Historical Commission, a Division of the Department of State, through grant funds administered by the Monmouth County Historical Commission.
The Jewish Heritage Museum is located in the Mounts Corner Shopping Center, at 310 Mounts Corner Drive, Freehold, NJ, at the corner of Route 537 and Wemrock Road (between the CentraState Medical Center and Freehold Raceway Mall). It is on the second floor of the historic Levi Solomon Barn. The JHMOMC is a tax-exempt organization under Section 501 (c)(3) of the Internal Revenue Code.

Now open to visitors by appointment, the Museum is handicapped and assistive-listening accessible. Masks and vaccinations are required.
The Museum’s Board of Trustees denounces racism and all forms of violence against any group, ethnicity, or race, and stands in support of any targeted community.