TEDxAsburyPark Returns To Asbury Park May 18th With “CHAOS” Theme 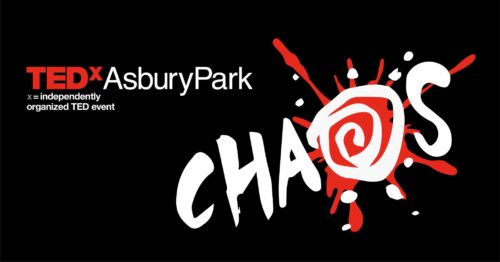 CHAOS: The void, the unknown, the absurd, the mess, the mystery. The only consistency is inconsistency.

TEDxAsburyPark, an annual Jersey Shore-based conference celebrating community, education, and innovation, is returning and this year’s event, focusing on the theme of “CHAOS,” will take place on Saturday, May 18, 2019, at the Paramount Theatre on the Asbury Park Boardwalk.

TEDxAsbury Park emphasizes the notion of “ideas worth spreading” through the annual event that prides itself on the surrounding community. Each year, a group of diverse speakers present their stories in the reflection of the event’s theme.  In its seventh year, TEDxAsburyPark will feature TED-style talks by comedians, entrepreneurs, musicians, scholars, and many more, all tied to this year’s theme of “CHAOS.”

Speakers at this year’s event will include:

Akilah S. Richards (Lawrenceville, GA) – Aside from being a writer, unschooling organizer, and podcaster, Akilah S. Richards is a founding board member of The Alliance for Self-Directed Education. She is also the primary voice behind Raising Free People Network, a community-oriented project that uses various media and trainings to challenge and encourage social justice-minded people to explore privilege and power in their relationships with children. Akilah will present on the concept of “Raising Free People,” which will examine unschooling (also known as trustful parenting) in the role of raising children. Akilah believes that through unschooling, a necessary chaos emerges and sheds the power-over dynamic from adults towards children, thus creating freedom for children and communities.

Alex Castillo (Brooklyn, NY) – Alex Castillo is a co-founder at Neurosity, a Developer Expert at Google, and formerly a Software Engineer at Netflix. His passion for the human brain and how we can use technology to understand it better inspired his talk, “Empowering the Mind”.  Alex will dive into how humans can empower our minds to change the ways in which we interact with computers. Considering that there are 21 emotions for which there are no English words, Alex will explore the ways in which technology can be used to measure emotions and how to use this information to better understand ourselves.

Ben Freeberg (New York, NY) – Ben Freeberg, who studied economics at Duke University, is a venture capitalist and a stand-up comedian that currently resides in NYC. He will discuss how his chaotic 2018 shaped him into an adult. Subsequent to being diagnosed with cancer and major changes in work, Ben will highlight how the chaos of that year contributed to his growth towards adulthood.

Cory Kahaney (New York, NY) – Cory Kahaney, an award-winning comedian that has been seen on CONAN, The Late Show with Stephen Colbert, The Late Show with David Letterman, The View, and America’s Got Talent will present a discussion on “The Joke That Saved My Life.” Corey highlights how humor can be used as a tool to conquer fear, endure trauma, and manage chaos. “As a victim of domestic violence, I know what it’s like to feel trapped and powerless. Fortunately, on my worst day, I stumbled upon my superpower. My then-husband was about to about to disfigure me with a jagged piece of wood and I disarmed him with nothing more than a joke. It wasn’t a particularly funny joke, but it was enough to interrupt and diffuse the situation. Since then I have used this technique to overcome any and all obstacles.”

Kenneth Campbell (Perryville, MD) – Dr. Kenneth Campbell is a Professor of History at Monmouth University in West Long Branch, NJ, where he has taught a variety of upper-level and graduate courses in British and European history for over thirty years, including a seminar on the Beatles since 2010. Ken applies the theory of chaos to history and exploring the possibility that the Beatles and the revolutionary changes of the sixties emerged out of the chaos created by the breakdown of the established order caused by the collective effects of the First and Second World Wars. His talk will link chaos theory with the Beatles as a cultural phenomenon that remains largely inexplicable.

Kolton Andrus (San Jose, CA) – Kolton Andrus is a co-founder and CEO of Gremlin, a Chaos Engineering firm. Prior to that, he served as a ‘Call Leader’ for both Netflix and Amazon, managing the resolution of company-wide incidents. It is his professional experience that has shaped his presentation, “Engineering for Chaos: Preparing for Disaster.” As society has become more reliant on technology, Kolton emphasizes the importance of preparation for when those systems fail. Chaos Engineering is a new software discipline dedicated to answering this question and preventing that failure from occurring.

Sarbmeet Kanwal (Holmdel, NJ) – Sarbmeet Kanwal, Ph.D. teaches Astronomy and Modern Physics at Brookdale Community College, where he was recognized as an Outstanding Instructor in 2016. He is a founding member of Garden State MOSAIC, an interfaith youth education program, for which he received the Earl Thomas Teasley Humanitarian Award from the Monmouth County Human Relations Commission. In his talk, titled, “Chaos to Cosmos,” Sarbmeet illustrates that our cosmic history shows that unprecedented results emerge from extraordinary determination to push through chaos to its culmination. Each of our universe’s successes came after initial periods of chaos and struggle. Now, for the first time, the road from chaos to success depends not just on nature, but also on human intentions. Sarbmeet’s presentation will address the question, “is our species mature enough to channel its intentions responsibly?”

TEDxAsburyPark discovers and curates more than 25 speakers, entertainers, and artists who will share their stories. At a TEDx event, live speakers spark deep discussion and connections through their stories.

The goal of TEDxAsburyPark is to bring world-class TEDx talks to the Jersey Shore in an all-day event that inspires attendees to learn and think about the future of their home in New Jersey.

To learn more about TEDxAsburyPark and to apply to speak, volunteer, attend, or sponsor, visit: http://tedxasburypark.com.

About TEDx, x = Independently Organized Event
In the spirit of ideas worth spreading, TEDx is a program of local, self-organized events that bring people together to share a TED-like experience. At a TEDx event, TEDTalks video and live speakers combine to spark deep discussion and connection. These local, self-organized events are branded TEDx, where x = an independently organized TED event. The TED Conference provides general guidance for the TEDx program, but individual TEDx events are self-organized.

Share
Facebook
Twitter
Email
Print
Previous articleSolo Female Travel: How To Keep You And Your Finances Safe
Next articleA Long Journey Through Grief That Led Into The Light