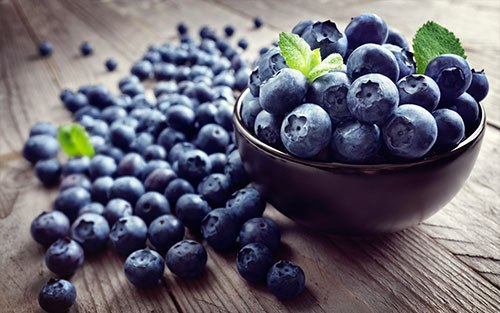 Since they are now in season, July is a great month to discuss the health benefits of blueberries. Did you know that blueberries are native to North America and are grown in 35 states? What’s more, they’re an ingredient in more than 4,000 products, from muffins to pet food to cosmetics—and to think it all started in New Jersey.

The popularity of blueberries can be credited directly to Elizabeth Coleman White and Frederick V. Coville, who, succeeded in hybridizing wild blueberry plants to create a new domestic blueberry industry. They began their work at the White family farm, Whitesbog, in Browns Mills, Burlington County an area known for cranberry bogs and the infamous Pine Barrens.

Although Washington and Georgia lead the country in terms of blueberry production, New Jersey is currently the fifth highest blueberry producing state in the U.S. Despite our state’s small size, New Jersey growers often register yields topping 56.7 million pounds of blueberries each year. Amazingly, over 80% of New Jersey’s blueberries are grown in Atlantic County and most of the blueberry harvest comes from a mere 8,800 acres.

Many of New Jersey’s blueberries are packaged at the Atlantic Blueberry Company at Hammonton.

Living in New Jersey, we are lucky enough to have picking areas nearby—fun for the whole family! They make a great snack all on their own or enhance a meal, make stellar desserts or sauces. Plus, these vibrant berries pack a punch in vitamins and health benefits.

Here are a few things blueberries can do for you:

#1: Blueberries are the #1 fruit with the highest antioxidant capacity. It beats out any other berry! These powerful antioxidants have been known to improve the immune system and prevent infections in the body (especially urinary tract infections.)

#2: Blueberries can help with weight loss. Blueberries have fewer than 100 calories in a cup, making it a healthy pick for snacking. There have also been numerous studies, linking blueberries to the loss of stomach fat.

#3: The deeper the color of a blueberry, the richer they are in antioxidants, vitamins and medicinal perks. Go for the darkest berries!

#4: Blueberries can reduce the risk of cancer. Anthocyanins (which give the fruit its hue) have been studied and known to attack cancer-causing free radicals in the body.

#5: Blueberries for the brain! Numerous studies have shown that blueberries can help reduce the risk of memory loss. Brain food at its finest!