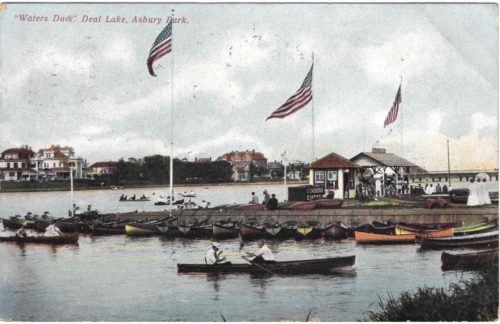 Time to get the trash before it hit the seas: There will be a Deal Lake Clean-up starting from the Asbury Park Boat Ramp on Sat. March 30 from 9-12 pm. Whatever time you can spare would be super. Dress for the conditions, and bring gloves please. Plenty of trash for all. Most likely will include a walk and clean-up around sunset lake which feeds into Deal Lake near the Boat Ramp.

Deal Lake is a Treasure!

Deal Lake is a beautiful treasure savored by residents, vacationers, fishermen and boaters for over a century. Lenni Lenape Indians would fish and eat the bounty of clams and oysters. During Colonial times the British harvested seafood to be sent back to England. During the Revolutionary War, Patriots would execute small attacks on British ships retreating to Deal Lake for cover from the British Navy as they fired their cannons at them.

Called Lake Uliquecks by the Lenape Indians, an 1781 map shows Deal Lake was known as White’s Pond. In the early 1800’s it was known as Hogs Swamp Pond. On the 1851 Lightfoot map, it was called Corlies Pond or Great Pond while Sunset Lake was known as Little Pond. An 1873 map calls it Boyleston Great Pond and shows it still is accessible to the ocean. With the engineering completed around 1890, Deal Lake was created as it is known today, closing off the inlet and creating several separate lakes and ponds. Deal Lake was a model system of the late nineteenth century for Flood Control and Storm Water Management. Over time, the lake lured many to build along its banks. Today, almost the entire shoreline has been developed with many homes built within the 100 year flood plain.