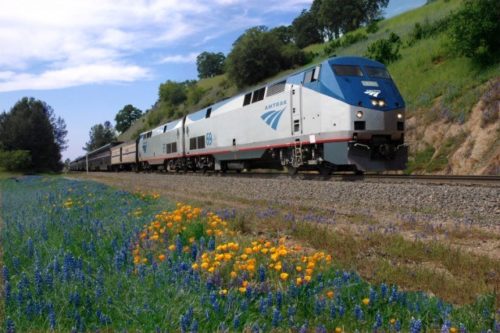 Enjoy this first segment of a travel diary on taking the train across our great country.

By Muriel Smith ~
Three Amtrak trains, about four and a half days, and a cost of under $300 if you don’t mind coach seating, or about $800 if you want a private roomette, will get you a leisurely and enjoyable trip from New Jersey to Sacramento, California. Double it, throw in an overnight in California’s capital, and you can get there and back in ten days!
And during that ten days, you get to see up close and personal, just how incredible the United States of America truly is. You get to travel from sea level to 10,000 feet without stepping off the train, cross the Continental Divide through a six-mile-long rail tunnel, go through 15 states and Washington, D.C, albeit some in the dark of night, and cross both the Missouri and Mississippi rivers. All the while, you have the chance to meet fascinating folks, enjoy terrific food, learn some history and important facts of many cities and towns along the way and spend time in each of the nation’s four-time zones.
That’s what I opted to do earlier this month to quench my thirst to see the Rocky Mountains in the winter. At the start, I didn’t realize I’d be mesmerized by the Sierra Nevada as well, captivated by the more than 30 tunnels wrapping around the mountains that the trains pass through, and in awe of the magnificence and diversity of America. 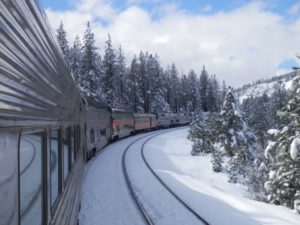 It’s not that I haven’t seen a lot of it before. During ten years of living in an RV around the turn of the century when home literally was where we parked it, I’ve already been to each of these states, though in those days and that mode of transportation we opted for Southern states in the winter. Still, seeing it from a comfortable seat by picture windows that went up to and covered part of the roof of the train’s lounge car certainly beats even the comfort and ease of viewing it all at road height through RV windows, many times on interstate highways.
The route from Metro Park to Washington, DC is familiar to anyone who has taken Acela, or any of the north-east corridor trains to the nation’s capital. It’s a quick three hours or so west through Trenton and beyond, Philadelphia, Delaware, and Union Station, which is a great place to spend a couple of hours if you like lots of shops, a variety of food, and spectacular views of the Capitol without ever leaving the building. It’s probably one of the best of all the Amtrak stations, given the amenities offered. By contrast, while the Great Hall in Chicago’s Union Station is a magnificent study in architecture, it is totally devoid of any shops, food, or attractions, though there is a food court and private lounges available at no cost, for first class passengers on overnight trips, or even coach passengers, for a $20 fee.
The other option for New Jerseyans is to take the train to New York, board another train to Washington, and you still meet up with the Capitol Limited, since it’s a once a day departure. I opted for the Washington trip since I like the convenience of Metro Park and the comfort of Washington’s Union State compared to New York’s Penn Station. 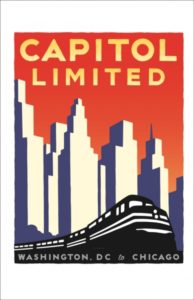 Taking the Washington-bound train scheduled for the time outlined by Amtrak, it’s a three hour wait from the time you arrive in Washington until the Capitol Limited leaves for Chicago in the late afternoon. Certainly enough time to pop next door to the station and visit the Post Office Museum, one of the Smithsonian’s magnificent buildings tracing our nation’s history. Or visit some famous name stores, have a snack, or simply enjoy watching other passengers in either the train departure area or the main section of the beautifully restored historic building.
For whatever reason, the Limited left 42 minutes late, with conductors profuse with apologies and explaining we were waiting for another train to clear the track. A walking tour of the overnight train led me to see the dining car was actually half the lounge car, so it was a short walk from enjoying a pre-dinner cocktail to a full three course meal.
Opting for coach seating for this portion of the trip, I also found the seats are spacious, offering lots of leg room, leg rests that go up and seat backs that go back, ensuring a decent night’s sleep even for those of us who did not bring blankets along. (Jackets do well as blankets in a pinch!) There’s no difference in menus or seating between coach and roomette passengers; seating for all opting for dinner is at tables for four, so you’re sure to meet other travelers. The menu offers five choices for dinner, always including chicken, beef, vegetarian and a rice or pasta, along with salads and desserts. Entrees range from $18 or so to $40.00 for a steak and seafood special, with most in the $23 range. (They’re included in roomette travelers’ rate, including dessert) Those not wanting to eat in the dining car have the option of bringing edibles of their own, or visiting the lower level of the lounge car for snacks, beverages, and light meals they can bring back to their coach seats. 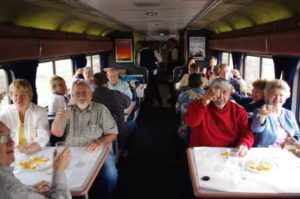 Sitting with a couple from Scotland who moved permanently from the British Isles to West Virginia last year and were now enroute to their condo in Hawaii for the rest of the winter, we enjoyed great conversations that ranged from the Peacock Throne which became a spoil of a war between India and Iran in the 15th century to sailing on the North Sea, something I had done with those terrific Sea Cadets from NWS Earle a few years ago. But that’s another story.

NEXT: Chicago and the California Zephyr