The Mile High City is Only the Beginning 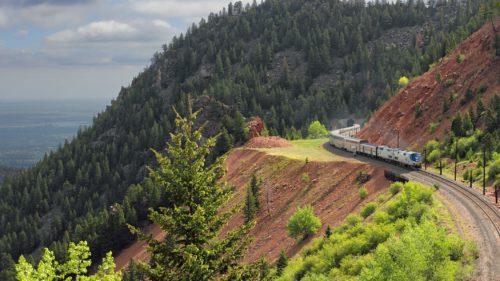 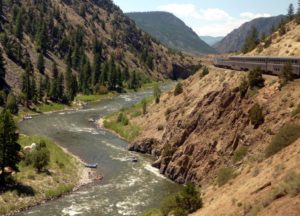 Part 3 of our travel series ~ By Muriel Smith ~

While seeing the United States traveling on any train is a great way to explore the diversity that’s always on display here, the awe doesn’t really start until you leave Denver, Colorado, and begin to climb even higher into the Rocky Mountains! Denver may well be the Mile High city, but that’s only a couple of hundred feet over 5,000 feet. The California Zephyr climbs another 5,000 feet and you can see and feel it happening as you leave this city with its beautiful houses trackside and its distant view of rugged, rocky mountains.
But there are sights before then! The Zephyr, officially train 5 westbound, is named for the Greek God of the west wind, the gentlest of all winds and the harbinger of spring; there’s no doubt riding on this can literally blow you away with awe at the beauty of it all. It’s also the name of the original train ride once known as the most talked about train in America back in the 1940s when it was operated jointly by at least three different railroads. Now strictly an Amtrak train, it makes the trip once a day between Chicago and Emeryville, California, and from there, a short bus ride to San Francisco. Not wanting to step foot into a sanctuary city, I opted to get off in Sacramento, about 85 miles northeast and the capital of the state since the Gold Rush of the 1840s. 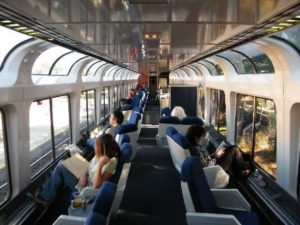 Today‘s Zephyr isn’t as luxurious or elegant as the Pullman cars of the past, but it’s so much more efficient, so much quieter and smoother, and of course, given the absence of coal-fired steam engines, so much cleaner. Very much like the Capitol Limited to Chicago, there are both coach and roomette cars, a lounge and dining room shared by customers in both, a downstairs area in the lounge car for snacks, sandwiches and breakfast pastries and beverages. Roomettes, for one or two persons, are two comfortable facing seats in front of large windows, and small storage area for a suitcase as well as an area to support beverages or snacks. At night, another bed drops down from above, and the two seats convert to a lower bunk, all comfortable, fitted with clean sheets and blankets, and several pillows. There are both overhead and reading lights and an intercom they say provides music, though I‘ve yet to find one that’s operable. Bathrooms are either down the hall or down a flight of stairs where a shower room is also located. The larger, more expensive bedrooms for two or more have a small private bathroom within.
Leaving the Windy City, you travel alongside the Chicago River heading to Naperville, an old city with new high-tech companies making it also an affluent family-oriented community. Then it’s on through Aurora, Illinois’ second largest city, Princeton, Kewanee, Galva Galesburg and…. not the same as ours, but…..Monmouth, the birthplace of Wyatt Earp. It’s about 170 miles outside Chicago that you cross the mighty Mississippi, the nation’s second longest river and enter Iowa where you’ll pass farms, small communities, lots of cattle, and horses, in spite of freezing temperatures, and see 300 miles of Iowa before entering Nebraska about 11 at night. Since the train’s regular smooth motion is great for sleeping, admittedly, I didn’t see any of the 500 miles we passed through that state before arriving in Colorado just before dawn. Nor did the stops at five different stations, including both Omaha and Lincoln, disturb my sleep, even though some station stops are dearly sought after by smokers who want to step off for a few puffs. They already know at the beginning, and are frequently reminded as well, that there’s no smoking allowed anyplace on the train under assurances the guilty will be escorted off at the next station. 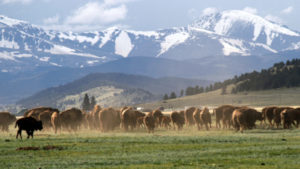 Arriving at Colorado just after 7 in the morning, passengers have an extra hour going west, since the Nebraska/Colorado state line is the change from Central to Mountain time. It’s a delightful full day to start out going through the Rocky Mountain Arsenal National Wildlife Refuge, once an area where chemical weapons were manufactured but since the 1980s a 15,000 acre refuge where you might get to see your first bald eagle sitting erectly high in one of the barren trees. Not far from there is another site that could make you swear off eating beef, once you see all the cattle in the pens waiting for their last ride before going to market.
It’s leaving Denver that the ohhs and ahhs begin in profusion. For the next 300 miles, there’s nothing but natural beauty, climbing the Rockies, traveling alongside the Colorado River, and passing through cliffs and canyons, to say nothing of tunnels and plains. The splendor and beauty continues throughout the day, and continues into Utah when you cross the line into that state around dinner time. In many areas, the natural beauty is untouched by so much as a road, the mountains so close at times you feel you can tough them. It’s when most people are enjoying not only friendly conversation but sharing the beauty of the moment as they gather in the lounge car to see the side of the mountains directly in front of them, the soaring tops of them through the overhead glass domes of the car. The trip is made even better when volunteers from the National Park Service or railroad history clubs come aboard and point out historic sites and other points of interest along the way. With so much to see, so much to absorb, so much to admire, it’s impossible to soak it all in.

Next: Those tunnels through the mountains

Bee Responsible! How To Attract Pollinators To Your Garden And Help Them Thrive

How To Care For Boston Ferns