The Battle for Wagner’s Creek 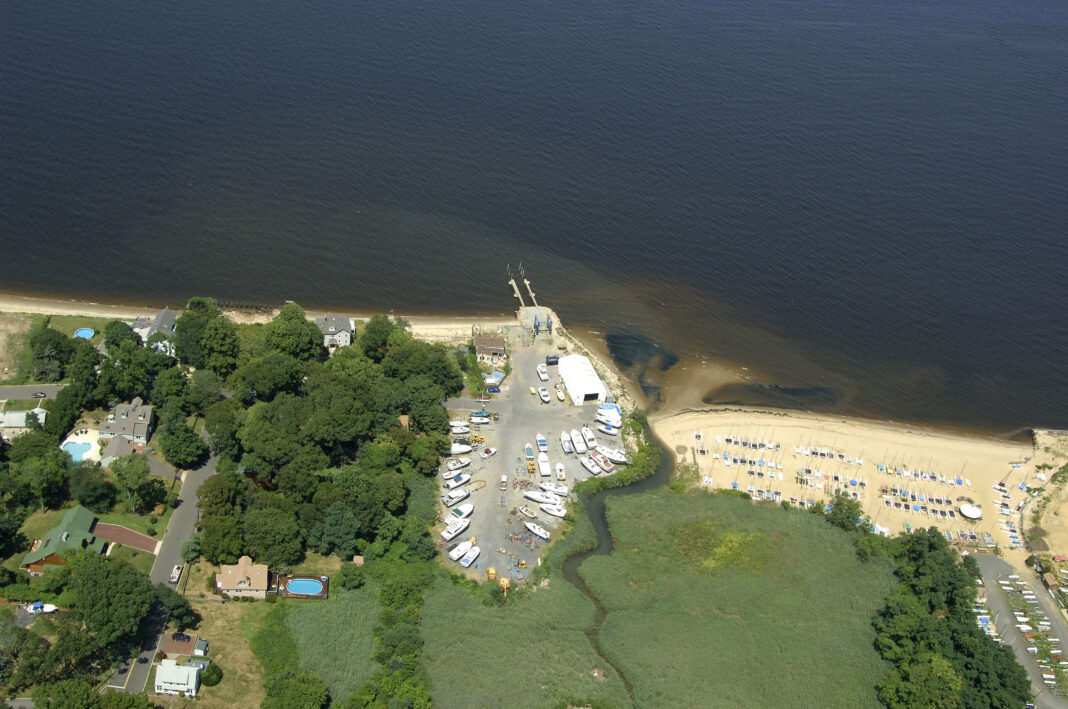 It was summer of 1966.  That summer the beaches all along Sandy Hook Bay and the Shrewsbury River were forced to close more often than they were open.  Sewage and effluent could be seen in the water.  Wagner’s Creek, which is the border of the towns of Atlantic Highlands and Leonardo emitted a stench at specific tides that caused those with properties on the banks of the creek to gag.

Ellen found herself, on that warm summer day, holding onto her friend Pearl’s belt as she hung over the bulkhead that shored up her yard against the creek.  “Whatever you do, don’t drop me!” Peal shouted.  “Don’t worry, I’ve got you!”  Ellen yelled back as Pearls weight began to drag her forward towards the black, swirling water.  Pearl, quickly, dipped a glass container, tied to a long pole, into the creek and came out with a sample of the fetid water.   Ellen pulled her back onto dry land and smiled. “OK. That’s what we need for the marine lab.”  She was referring to the Sandy Hook Federal Marine Laboratory which opened in 1960.   They said they would analyze the water sample for Ellen and give her the results.  Pearl, wearing dishwashing gloves, sealed the canister.  They both were shocked to see the murkiness of the water in the sample container that they were given from the lab.

Ellen was born on August 24, 1937, at Saint Vincent’s Hospital in New York City, to Helen and Frank Grady.  Later, the family moved to Woodside, NY where they added two sisters (Fran and Denise).  Each summer, the family would rent a bungalow from Connor’s Hotel and enjoy the Bayshore.  It was at a beach club in Sea Bright, where Ellen met the dashing local man that would become her husband.  Jack was bigger than life. He raced cars and boats, he was a semiprofessional skier and was a skilled welder and carpenter.  They married in 1961 and moved to Atlantic Highlands.  There, they gave birth to a son and built their dream home next door to the house they were renting.

The phone rang and Ellen received the news.  The water from Wagner’s Creek was severely polluted with human waste.  The Sandy Hook Federal Marine Laboratory was sending the full report.  Ellen immediately called Pearl.  When the report arrived, they took it to the Atlantic Highlands Borough Administrator.  He read the report and told Ellen and Pearl that his hands were tied.  There was no way to know where the sewage was coming from.  He said he wished he could help.  As they left Borough Hall, Pearl said “I guess that’s it, then.”  Ellen stopped walking and looked at her friend “It’s not over. I am not letting this go!”

Pearl did not know Ellen that long, but one look at Ellen’s face and she saw a fierceness that she had not seen before.  Her friend’s green eyes seemed to darken, and her lips drew into a tight line.  “This is our bay and our creek, and our neighborhood.  Let’s go, we have calls to make and letters to write.”  She marched towards her car with Pearl in tow.

The summer seemed endless, the smell of the creek and the bay was intolerable.  Each day, Ellen and pearl were on the phone calling state senators, federal senators, and congressmen and even Governor Richard J. Hughes. The calls all ended with phrases like, we would love to help, but without evidence of where the pollution is coming from, it is out of our hands.

One morning as he ate breakfast and Ellen was busy washing dishes, her 4-year-old son asked “Mommy, how come you’re doing this?  Nobody seems to care about the creek or the bay or the river.”

Ellen came over and sat down next to her son.  “I am doing this because I never want your children or grandchildren to come to you and ask you “Daddy, what was a fish?  Did you ever see one?” I guess that means I’m doing this for you.”  She smiled, and as always, her fantastic smile lit the room and made her son smile too.

Later, she picked up the phone and dialed Pearl’s number.  When she answered, Ellen told her that they were going to find the source of the pollution by following the creek at slack tide and essentially using their noses.

The agreed upon day came and clad in boots and rubber dishwashing gloves, they marched along the banks of Wagner’s Creek looking for the source of the contamination.   The marine lab warned them that the water was so highly contaminated that it was a severe health risk, and they would need protective gear.  For hours they searched, occasionally finding old piping that gave them a glimmer of hope but turned out to be nothing but old piping.  They tracked the creek for several days.

One day, as summer began to turn to fall, they were following the creek as it neared Bayshore Junior High School.  There it was.  A pipe.  A big pipe.  It was spewing sewage.  They quickly got the specimen jar and pole ready.  Both realizing that to get caught here taking samples was a dangerous undertaking.  Somebody was purposely doing this.  Once again, Ellen grabbed onto Pearls belt and began to lower her to a position where she could collect a sample of the running sewage from the pipe.  It was more difficult for Ellen to hold on this time, the creek bank was very muddy, and she slid a few times, prompting Pearl to yell “DON’T DROP ME!!!!”.  Then with the sample retrieved, they bid a hasty retreat.

A week or so later, the marine lab at Sandy Hook confirmed that what they collected was not runoff from a storm drain.  It was sewage.  They took the report back to the Atlantic Highlands Administrator.  He explained that the school was in Middletown.  It was not in the Borough’s jurisdiction.  Ellen prepared for the same run around that they had gotten the first time.

She and her husband, Jack, went to visit friends Diana and Richard in Leonardo, a few blocks away.  The two couple’s children played together while the adults talked.  Invariably, the subject of Wagner’s Creek came up and Ellen explained the latest frustration.  Diana and Richard suggest that Ellen get in touch with the Leonardo Taxpayer’s association and tell them what’s going on.  Organized Taxpayers have clout with their towns.  They hold the towns “wallet.”  Ellen’s husband explained that he knew Gertrude Neidlinger and her brother the artist and that Gertrude was the secretary of that organization.

Now Ellen had her army.  After discussions with Gertrude Neidlinger, letters decrying the dangerous levels of pollution from members of the association and those residents living near Wagner’s Creek were brought before the Middletown Sewer Authority and the Board of Health.  The Authority reluctantly explained that, as of that moment, they had no sewage plants to control.  They had not been built yet. That night the Middletown Sewage Authority unanimously passed a resolution authorizing the chairman to enter into a contractual agreement with Charles J. Krupper, sewer engineer, for the preparation of plans and final drawings for the new regional sewer system.

Ellen and Pearl and their allies had won a David vs. Goliath victory.

But Ellen could not stop there.  She kept writing letters to government officials expressing the need for an oversight entity to protect the environment.  And she was not alone.  Citizens across the United States began writing letters and lobbying for such an agency.  And, just like Ellen, they would not stop. In some places, there were protests and ad campaigns and it kept growing.  In 1970, in response to the welter of confusing, often ineffective environmental protection laws enacted by states and communities, as well as swelling public pressure, President Richard Nixon created the EPA to fix national guidelines and to monitor and enforce them.

After the “Battle for Wagner’s Creek” Ellen went back to raising her son and taking care of the house and cats.  She went back to work, starting a career as Purchasing Agent for a local electronics firm in 1974.  She worked hard caring for her husband who was in bad health, her mother who had a variety of health issues and nurtured her son.  She never stumbled or complained about the load that she bore. Between 2003 and 2017 she battled 4 cancers.  After her first cancer, she became an outspoken advocate for cancer research and the passage of other cancer-related bills.  She was frequently in correspondence with Senator Bob Menendez and Congressman Frank Pallone over issues from the cost of treatments to new treatment trials.

Ellen Grady-Grodeska passed away at her home surrounded by her family, the same home that is bordered by the clear waters of Wagner’s Creek.  Her son held her hand.  The next time that you find yourself enjoying Sandy Hook Bay, or the Shrewsbury River, think of Ellen and her quixotic battle to save them and smile.  Somewhere, she will be smiling back.