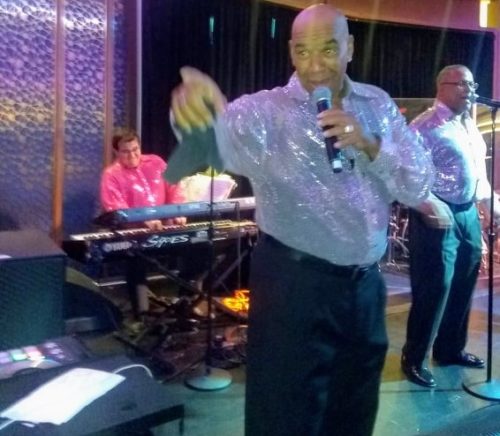 It’s always fun to meet new people, especially those with talent in the arts and music field! One such individual is the incredible Teddy B. I was given heads up that he would be performing with the Sensational Soul Cruisers in Atlantic City. Although he has performed locally, I hadn’t had the chance to catch a local gig. So on a recent cruise, we headed on down to the Hard Rock in AC. Not being into gambling nor the constant bling-bling stimulus overload found in a casino, I had to think about it. But the idea of an early evening mix of Soul/Oldies/Motown was enough to head on over.

Upon arrival, self-parking afforded us the perfect ‘near the door’ spot! I’ve learned to take pictures of the location in large garages on the outside chance I’d space out later! We made our way to the lounge & stage area found on the left before hitting the Café bar further down. We were lucky to find two seats at the circular bar with a fine view of the stage. Of course, there were poker machines on the bar and killing time before the show, away went a few bucks as I took my time playing .25 bets. Within moments the lounge tables completely filled to standing room only. Obviously the Sensational Soul Cruisers and Teddy B have a great following!

Vocalist, Teddy B, originally from West Philly, currently resides in Barnegat. He began at an early age, attributing his love of music to singing in church and notes his music foundation was forged in Gospel. Teddy mentioned that he later attended the same church as Whitney Houston, but missed out on a chance to be part of an opening act for her. His early experience with Gospel soon led the way to his love of a variety of music such as Philly Soul, R & B, Funk as well as covers and originals. Teddy mentions that he learned to play the keyboard at the ripe age of 7 and self-taught to play drums. He shares his vocal ability with his brother, Fred Johnson, who is an acclaimed jazz vocalist based out of St. Pete, Fla. Teddy gives credit to his vocal coach, Phillip Thomas of Crown Heights Affair.

Music is Teddy’s life, passion and his main line of work. He’s been in the business for many years always a member of a group. The year was 1974 when Teddy began with Frankie Lymon’s Teenagers, a group of 5 teenage boys. Their first recording in a studio was…..wait for it….you all know it…. “Why Do Fools Fall In Love?” I was excited to google this teen group and recommend you check out and have a listen to the YouTube video and old recording! Talk about a long history of a vocalist! Also in ’74, Teddy was also a member of ‘The Second Verse’ which had a Top 100 Billboard with sold-out venues all over, including MSG and Radio City!

Teddy does perform solo acts and has had two charted songs in the UK. His 1st original single release, ‘I’m So In Love’ charted in the UK, Canada, and Grenada. One more recent hit, ‘I Can’t Help Myself’, in collaboration with Nigel Lowis & DSG Records was #1 on the UK Soul Chart for 3 weeks! Still performing as a guest singer with the Sensational Soul Cruisers, Teddy says he also sings with ‘Anonymous Band’ occasionally, led by his childhood pal, James Scooby Borden. A recent performance found them at the Bueno Sera in Red Bank.

This guy sure gets around! Participating over the years with many bands, he currently enjoys performing with a childhood friend, Lenny Covington, in Parkway Soul Band. Lenny was the former drummer for Patrice Rushen. They do an Earth, Wind & Fire tribute show as well as a Motown/R&B show. If you’re lucky, on occasion you could bump into Teddy B on LBI at an Open Mic at the Gateway or Nardis! 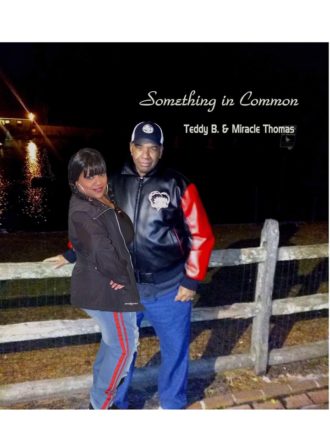 This talented crooner has shared the stage with the big-timers such as Marvin Gaye, Nancy Wilson, Larry Graham, Gloria Gaynor, Little Anthony, The Delfonics, The Main Ingredient, Manhattan Transfer, Lakeside, The Emotions, Kool & the Gang and many more! Heck of a lot of fantastic company! Over the years Teddy had formed his own groups as well including Special Affair and Platinum Soul. He joined the Sensational Soul Cruisers in 1998 and performs with them off & on for the last 20 years.

Many of you most likely have caught Teddy in action in most popular local venues here along the Jersey Shore. Some familiar spots include the Stone Pony, Wonder Bar, McLoone’s, Hemingway’s, Martell’s, Keenan Wildwood, Harrah’s, Hard Rock and more. Along with the local joints, Teddy has also performed in Pittsburg at the Rivers Casino with ‘Parkway Soul’ as well as Resorts World NYC. He says basically he stays in the Jersey Shore/Philly/NY areas but isn’t opposed to traveling as he hopes to begin performing in the UK.

Teddy B enjoys performing and is available for private parties, grand openings, birthdays as well as anniversary & retirement events. He enjoys many private events and loves making his audiences happy. He is a singer/songwriter/producer with a catalog of over 800 original compositions! He says he’s passionate about his craft and loves a live audience participation while he sings! He does accommodate requests which I’m guessing adds to his tremendous following!

Just released is a new duet featuring Teddy B and Miracle Thomas called, ‘Something in Common’ which is a remake of a Whitney Houston/Bobby Brown tune. It was set to be available on Thanksgiving Day.

Learn more about this fantastic local crooner under Teddy B on CD Baby, Spotify, as well as all digital outlets. Lots of great YouTube videos are just waiting for you to listen to! The Sensational Soul Cruiser schedule is posted on FB with quite a few upcoming shows in AC & Philly area.

For private bookings and further info you can contact Teddy’s agent who happens to be his lovely wife, Tracey at: traceybarry330@gmail.com