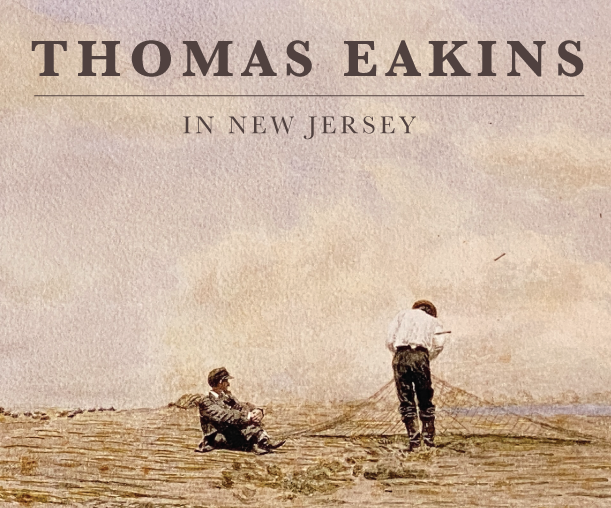 Island Heights, NJ—The John F. Peto Studio Museum is pleased to present a Thomas Eakins in New Jersey exhibition from May 1 through June 27, 2021.

Thomas Eakins (1844-1916), an American realist painter, photographer, sculptor and fine arts educator, was mostly known as a Philadelphia painter; however, Eakins spent important time in New Jersey using his brush and camera to present activities he enjoyed in the marshlands, as well as the work of the shad fishermen in Gloucester County in southern New Jersey.

Eakins involved a small group of students known as “The Boys.” These young men became collaborators and comrades with Eakins, engaged in the pursuit of art. Edward Boulton of Point Pleasant was one of these “Boys.” He was given a large collection of photographic prints and oil studies by Eakins and his wife, Susan. These materials and the generous access given to them by Boulton’s descendants are the genesis of this exhibition.

“We are pleased to be able to partner with Pedersen Galleries on this first presentation of the New Jersey aspect of Eakins’ work, and to celebrate the achievements of one of America’s greatest realists,” says Harry Bower, art curator for the John F. Peto Studio Museum.

The John F. Peto Studio Museum received funding this year from a grant administered by the Ocean County Cultural & Heritage Commission from funds granted by the New Jersey State Council on the Arts and the New Jersey Historical Commission, a division of the Department of State. Additional funding was received from the Pheasant Hill Foundation.

*Tours by appointment only. Required safety precautions will be in effect, including masks and social distancing. To schedule your tour, visit us online.*

The John F. Peto Studio Museum, located in beautiful, historic Island Heights, New Jersey along the Toms River and Barnegat Bay, features the home and studio of John Frederick Peto (1854-1907), the renowned late 19th-century American still-life painter in the trompe l’oeil style. The non-profit studio museum is one of the National Trust for Historic Preservation’s historic home museums, which documents the aesthetics, work habits and lifestyle of a significant American artist. The house (constructed in 1889) and the gardens have been professionally restored to preserve the integrity of the artist’s vision. Original furnishings capture the home as it would have been in Peto’s time along with displays of original artifacts as depicted in many of the artist’s paintings. The museum offers a variety of programs, including rotating exhibitions, educational programs, a cultural lecture series, garden programs and special events. The John F. Peto Studio Museum is part of the Island Heights Historic District, listed on the National Register of Historic Places in 1982. The district and its architecture have allowed the town to remain a resort and recreation-oriented destination, which retains its late 19th-century ambiance. This not-for-profit home and studio is dedicated to preserving Peto’s legacy by maintaining the historic property as a working museum, fostering educational opportunities and serving as a partner in the community. To learn more, please visit http://petomuseum.org/

Heading To The Beach? Bring A Meal From Fresh Kitchen With You!