Today begins the Piping Plover season. Pets, even if on leashes are not allowed on the ocean side of Sandy Hook beach. Did you know that within its Atlantic Coast breeding range, the piping plover was federally listed as threatened in 1986?

According to https://www.fws.gov/,  the piping plover is a small shorebird approximately 7 inches long with a wingspan of about 15 inches. Piping plovers have white underparts with a light beige back and crown. Breeding adults have a single black breast band, which is often incomplete, and a black bar across the forehead. The legs and bill are orange in summer, with a black tip on the bill. In winter, the birds lose the breast bands, the legs fade from orange to pale yellow, and the bill becomes mostly black. Piping plover adults and chicks feed on marine macroinvertebrates such as worms, fly larvae, beetles, and crustaceans.

Piping plovers are present on the New Jersey shore during the breeding season, generally between March 15 and August 31. These territorial birds nest above the high tide line, usually on sandy ocean beaches and barrier islands, but also on gently sloping foredunes, blowout areas behind primary dunes, washover areas cut into or between dunes, the ends of sandspits, and deposits of suitable dredged or pumped sand. Piping plover nests consist of a shallow scrape in the sand, frequently lined with shell fragments and often located near small clumps of vegetation. Females lay four eggs that hatch in about 25 days, and surviving chicks learn to fly (fledge) after about 25 to 35 days. The flightless chicks follow their parents to feeding areas, which include the intertidal zone of ocean beaches, ocean washover areas, mudflats, sandflats, wrack lines (organic ocean material left by high tide), and the shorelines of coastal ponds, lagoons, and salt marshes. 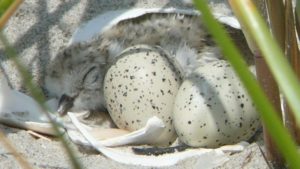 Threats to the piping plover include habitat loss, human disturbance of nesting birds, predation, and oil spills and other contaminants. Habitat loss results from development, as well as from beach stabilization, beach nourishment, and other physical alterations to the beach ecosystem. Human disturbance of nesting birds includes foot traffic, sunbathing, use of kites/kiteboards/ kitebuggies, pets, fireworks, mechanical beach raking, construction, and vehicle use. These disturbances can result in crushing of eggs, failure of eggs to hatch, and death of chicks.