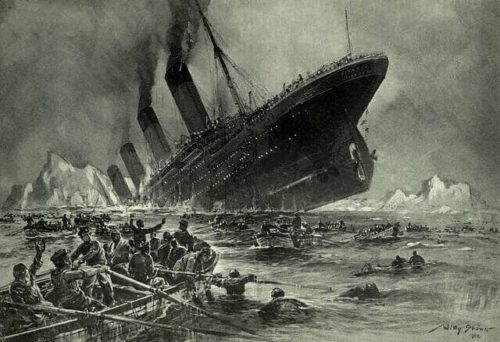 On this day the mighty Titanic sank and new laws were created that enabled Marconi to buy the site known as Camp Evans, now home to InfoAge.

How could the events of that tragic night in April 1912, hundreds of miles away, change Wall Township history twice, and forever? What would Wall Township be like if a certain passenger had not switched to another ship that sailed a week before the Titanic? How would the south bank of the Shark River be different?
Let’s see.
The unsinkable Titanic had the latest technology available in 1912. This included the new wireless communications system developed by Guglielmo Marconi.
Marconi wanted to build the first wireless network around the world, but he lacked the funds and could not excite investors in wireless. In the hope of getting more publicity for his system, he convinced the builders of the Titanic that the wealthy passengers would like the new system to get stock quotes and to be sure their chauffeurs were at the docks to meet them. He installed the latest wireless system and assigned two of his employees to operate the equipment during the voyage.
Marconi, his wife and two daughters had accepted an invitation to travel on the maiden voyage of the beautiful new ship.
If you did not see the movie or don’t know about the famous luxury liner, the Titanic hit an iceberg and in a few short hours, 1,500 people would die in the freezing cold Atlantic. Seven hundred and fourteen people would live due to two reasons. First, they would get into a lifeboat before the cold water stopped their heart, and second, due to the SOS messages sent on the Marconi wireless equipment, ships would arrive to pick up the passengers in the lifeboats. The survivors were in mortal danger, even in the lifeboats. If the seas got rough they, too, would have died of exposure. The survivors were so thankful, Marconi and his surviving employee were hailed as heroes.
They even awarded Marconi a gold medal. Marconi got more publicity than he could have imagined, and investors were now willing to fund his plans for the worldwide network on a grand scale. The U.S. government realized how important wireless was to safety at sea, and passed the Radio Act of 1912. The new law stated every ship entering U.S. water has to have wireless equipment, and during a national emergency, the government could take over any wireless station.
The orders for new wireless equipment poured in and Marconi began building his network. Marconi, already familiar with Monmouth County, selected the bluffs of the south bank of the Shark River in Wall Township to build his largest wireless station. Hundreds of acres of farms would now host six 400-foot towers to catch wireless messages from Europe.
Marconi would build five permanent buildings, using the finest fireproof materials and construction technology available in 1912. Wall Township would never be the same farming community, as it now played a major, but quiet, role in a global communications revolution and information age.

The second time the Titanic sinking changed Wall was in 1917 when under the authority of the Radio Act of 1912 President Wilson would order the U.S. Navy to take over and operate the Marconi station. Under the protection of nearly 100 U. S. Marines, the Navy would use the Wall Township station as the central wireless communication point for messages between, Washington and the U.S. forces fighting in Europe.
Some of the most import messages of WWI would be dispatched to and from Wall Township.  As the war was in a stalemate, President Woodrow Wilson would use the station to begin negotiations to end the war. A 1919 article would credit the use of wireless for shortening the war and saving thousands of lives.
Wall would have remained farmland if Marconi had actually sailed on the ill-fated ship.  Wall’s Marconi Road would have kept its 1912 name, River Road.  Instead of historic buildings, homes would line the road.
Marconi sailed a week before on another ship and escaped a gentleman’s fate.  Had he sailed and died, his company would not have had the momentum to complete the worldwide network. He told his wife he would meet her and the children when the Titanic docked in New York. Luckily for his family, they, too, did not sail on the Titanic.
Marconi’s infant daughter took ill and her mother would not sail with a sick infant.
By 1924, the technological advances in wireless would cause RCA, the new owners, to sell the obsolete station. The 400-foot towers would be dropped, but the stage was set and future turmoil in Europe would bring the old Marconi station back into a new phase in the communications revolution.