Fair Haven Community Comes Together for a WWII Vet 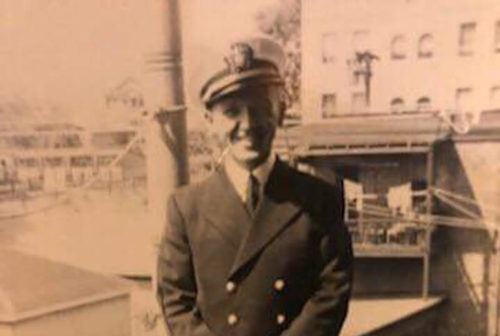 It’s truly amazing how one heartfelt Facebook post written in earnest by Fair Haven’s Joe Perrotto started a beautiful Thanksgiving for two special people and for more than 300 others who happened to be reading the Fair Haven Facebook page at the time.

It all started when Deborah Stevens from Washington, D.C. placed a phone call to the Adjutant of the American Legion Post 168 asking if there would be a Thanksgiving Day Dinner for the local veterans in the Fair Haven area. That is something that used to happen but does not anymore. Joe Perrotto — the man who answered that call and a Fair Haven resident, First Aid Squad member and former United States Marine — felt bad that they no longer organized dinners on holidays for the veterans, so he began to search for a solution. Joe has a passion to recognize and honor all those who have served our country both past and present. He began the quest to find a local restaurant that would have a table last minute on Thanksgiving and could accommodate Henry Stevens, a 98-year-old WWII Veteran from Fair Haven, and his daughter, who was visiting for the holiday.

He posted the question on the “Fair Haven, NJ” Facebook page. Henry’s daughter Deborah was driving from Washington, D.C. to spend the holiday with her father and hoped to get a reservation at a local eatery. Joe asked if anyone knew where they could get dinner on Thanksgiving and that is where the beauty begins. One post, many likes, multiple tags, a few shares and within moments a happy ending while over 300 eyes were emotionally contributing and watching it all happen. The offers came in like wildfire and in my opinion the typical style for the people of Fair Haven – “I’ll have him over to my house”, “I’ll cook them dinner”, “They can join our family”, “We would love to bring him and his daughter dinner and food!” But in the end, Julie Aurichio and her fiancé and Raven and The Peach chef Robert Candiotti gave this story the feel-good moment by inviting them to come to dinner at the Raven and the Peach in Fair Haven. Not only would they make Henry and his daughter Deborah dinner, but they would pay for it too. 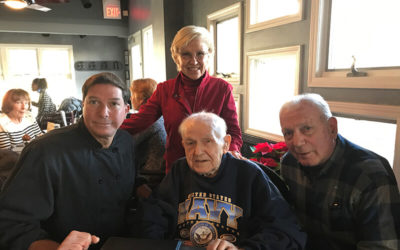 Deborah couldn’t make it on Thanksgiving, but Rob and Julie delivered the meal to Henry’s Fair Haven home instead and made a date to make him lunch, which Henry insisted he pay for since they made him Thanksgiving dinner! Julie managed to get local Fair Haven elementary school children to make Henry cards and dropped them off as well.

On November 29, 2018, Henry Stevens, a Navy lieutenant junior grade in World War II, his daughter Deborah and Joe Perrotto, had lunch at the Raven and The Peach Tea Room, were greeted by Chef Rob Candiotti and sat and got to know one another. Since then I think more people know about Henry and will most likely help him out from time to time. When I asked Julie Aurichio for a quote about this she said, “It’s not like I did anything great or unusual. I did nothing. I responded the way people should always respond every day. We should help one another every day, not just on Thanksgiving and not just because they saw it on Facebook.” Since that post, Julie and Rob have offered to clean his house from time to time and make him Christmas dinner. But then again that is just what Julie and Rob do.

“We should help one another every day, not just on Thanksgiving and not just because they saw it on Facebook.”

After the lunch, Joe introduced Henry to another local hero and neighbor in Fair Haven, Josh Zager, a retired Major in the Marine Corps and an F-18 pilot who flew over 40 combat missions in Afghanistan. They sat and talked for close to two hours that day, sharing heartwarming stories from the past. Henry served as an engineer on the USS Tuscaloosa, a Navy cruiser that President Roosevelt and other officials sometimes used for travel in the years before the United States entered WWII. The ship was involved in both the Atlantic and Pacific campaigns and participated in shore bombardment of Okinawa and Iwo Jima. Henry’s memory is sharp, and he can describe in detail the operation of the ship, what it felt like to be in the engine room during an attack, and shore leave in exotic ports, such as Shanghai. Henry has a collection of service medals from all the areas his ship visited – from China to the Mediterranean. Can you imagine being in that room with three local modern-day heroes and one from the greatest generation that ever lived, hearing those stories?!

To think it was just one Facebook post that connected so many new friends (me included) and a renewed hope for all who were part of this beautiful story. Henry turns 99 this month. Happy Birthday, Henry Stevens, and thank you. 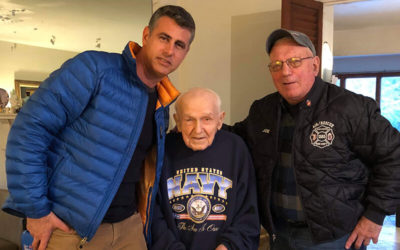 This article first appeared in http://communitymagazinenj.com/