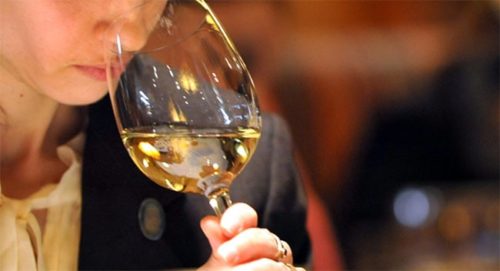 I’m often asked, “If cherries aren’t an ingredient in wine, then how come some wines smell like cherries?” Understanding the flavors in wine starts with a seemingly simple question:

Where do wine flavors come from? Well, ethanol molecules lift off from the surface of the wine during evaporation, carrying with them a slew of aromatic compounds. These compounds float into our noses and help give us an idea of the wines many flavors. Wine flavors are created by chemical reactions during fermentation (when yeast turns sugar into alcohol). Fermentation creates hundreds of different flavor compounds.

At the atomic level, aromatic compounds in wine look identical to – or are mirror images of– smells you already know. When you sniff cherry in wine, you are smelling the identical aroma compounds that also waft from a freshly baked cherry pie. Which is why we often reference, fruit, flowers, herbs and other familiar scents.

Then there are the aged and oaky scents that appear as wines are aged. These smells can  include vanilla, baking spices, pie crust, caramel, brown butter”, tobacco, cedar, coffee, leather, creosote, and chocolate.

So, what is a quick guide to tell what you’re drinking by scent and flavor?

I thought you’d never ask. Here is a brief list that provides the most common scents and flavors for the Noble Grapes.

Cabernet Sauvignon: Graphite—aka pencil lead. (Those of us who chewed pencils in grade school know exactly what that tastes like); Baking spices; black cherry; currant, especially black currant; cedar; bramble; vanilla, and even green bell pepper if made from under-ripe Cabernet Sauvignon grapes (which isn’t necessarily a bad thing).

Merlot: Raspberry notes, as well as black cherry; plum; blueberries and jam—these notes often give the wine an aroma similar to fruitcake. Other common notes of Merlot include graphite; cedar; tobacco; vanilla; cloves and chocolate.

Riesling:  Offers primary fruit aromas of orchard fruits (green apple, nectarine, apricot, peach, honey-crisp apple, pear); citrus (particularly lemon and/or lime); melon; tropical fruits; strong floral notes, minerality, spice; honey; toast, earth and smoke. Then, there’s that telltale aroma of “petrol” — the word the British use for gasoline. It’s not necessarily a bad thing. In fact, some people love it and it is more prevalent if the Riesling is aged.

So, If I smell cherries and you smell pepper, who’s right?

Differences in our physical attributes, along with how our brains process smells, partially explain why we each pick out different wine flavors and smells. That said, each wine does have a “base set” of aromas upon which most people agree. As one of my wine friends likes to say “Get out and use your snout!”

Next time you pick up a glass of wine, take the time to pick out three to five wine flavors BEFORE you taste it. That’s the secret and after practice, you’ll become an amazing taster.