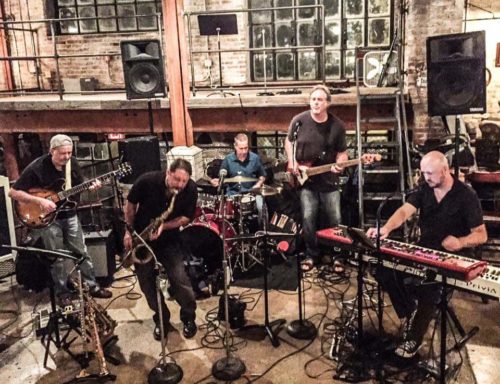 Arne (pro: arnah)Wendt is a popular local musician with true natural talent as well as an honest, caring attitude with a smile and a hug for all. He grew up in Somerset County, NJ. He is the youngest of six kids with three older brothers also into playing music on various levels. As with many musicians, Arne was introduced to music growing up with musical parents. With his mom playing piano and dad cranking out tunes on his harmonica it is easy to see how the music bug hit. He learned much of his reading and music theory in grade school. When other kids might have gone to summer camp, his mom would enroll him (at his request) into a local summer music program run by the school district. He loved it! As for playing instruments, besides the trumpet lessons from school, it was all about putting on a record or cassette and playing along until he either nailed it or sounded good playing along with it. 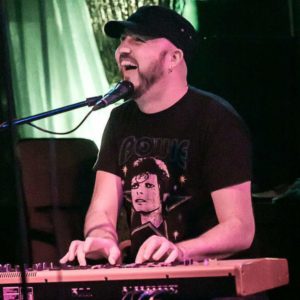 Watching older brothers play guitar, jam with each other & friends got his fingers itching says Arne. A cheap classical guitar from his brother was the first instrument he had his hands on. Always looking for “new sounds” Arne would experiment and “do things” like tape a ring of keys to the body to get “distortion” or use D cell batteries to play “slide guitar.”
Arne’s brother is a fantastic trombonist. Watching him rehearse back then with the high school jazz band influenced his joining the grammar school band. Maynard Ferguson, the famous screamer trumpet player, was a popular musician then so naturally he chose to play trumpet. A nice LOUD instrument which Arne took to quite naturally. He developed excellent tone but had a poor embouchure and by the end of high school finished he had stopped playing. **(OK…not the trumpet player myself….so when Arne mentioned this “predicament” I hadn’t a clue! Do you?
Def: the position and use of the lips, tongue, and teeth in playing a wind instrument.) Ya’ learn something new everyday!
Laughing, Arne relays that his intro to keyboards was quite interesting. His mom never wanted the kids banging on her piano, so naturally, when she wasn’t around, that’s what they did! He says he was a latch-key kid as his parents divorced when he was young, so he’d come home early and there it was, taunting him to play it. By this time he’d already developed a pretty good ear and could pick up simple songs fairly quickly. He also would “write” his own songs too.
Sharing a childhood memory, Arne remembers his Mom coming home from Christmas shopping. Poking out of one of the bags was a little Casio electronic keyboard. Excitedly asking “is that for me?” to which he got “no” for an answer. The next day he feigned illness and played hooky. He found the keyboard already wrapped. After carefully unwrapping the Casio, he played that keyboard all day. That was it! 7th grade and he fell in love! He decided to save his money from his paper route and head out to Arthur’s, the catalog store, popular back in the 80’s and bought his first little keyboard, a Yamaha Portasound. The cats meow, this baby had built-in speakers and a drum machine! From that moment on he was very hard pressed to do homework. He’d come home from school every day and just play that keyboard nonstop. 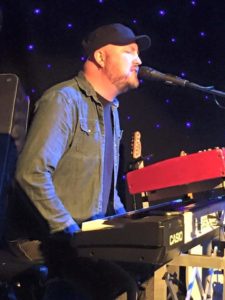 Arne gives to credit Keith Emerson and Emerson Lake and Palmer for blowing his mind with the synthesizer solo from “Lucky Man”. He thinks he first heard this when at about 4 years old, and couldn’t believe such a sound existed! His brother Erik was always tinkering and soldering things in their basement. He built a little analog breadboard oscillator that ran on a 9-volt battery and played through a tiny speaker. Although only one knob changed the pitch, he was fascinated by it. He says his brother, Erik, is the tech guy in the family who really loved synthesizers, feeling this was a major influence. He gives credit to Erik for inspiring him. The young Arne would bother him constantly when listening to music: “What’s making that sound?” “I don’t know, be quiet and listen to the music!”
As far as other musicians who’ve inspired him, the list is endless. It doesn’t have to be a keyboardist. Framed illustrations of Miles Davis, Jimi Hendrix and John Lennon fill his apartment walls. As for keyboardists, everyone from Herbie Hancock to Tony Banks to Keith Emerson to Stevie Wonder to Bill Evans….. There’s too many to mention! And really, he says it always goes back to The Beatles…
From the shower to the stage, from playing music solo to playing with an orchestra, Arne says “it’s all beautiful to me”.
Referring to himself as a “professional mercenary musician”, this amazing musician does everything from being a member of a number of bands to pickup gigs with musicians he never met before. He loves variety-a wonderful thing.
Some of the bands Arne plays with:

Jon Bon Jovi & The Kings of Suburbia: (Jon put this band together for when he’s not leading Bon Jovi, and Arne had the privilege of being a part of it since 2011.)

Motor City Revue: (Arne’s one of the founding members of this fantastic Motown-and-soul tribute act. They’ve been playing the Jersey Shore area and beyond since 2010. 11 pieces (5-piece horn section) at their largest, and they’ll burn the soles of your shoes!)

The Moroccan Sheepherders: (one of the most fun bands with the most fun name in the area! Their repertoire is all over the map, and they’ve got about 5-6 singers. What’s not to love?)

Sir Brave Todd Robbins & The Dirty Geese, Arne is the de facto lead guitarist on keyboards as his buddy Todd sticks to the acoustic guitar. Their playlist is a lot of Beatles and Elvis Costello with a bunch of other favorites mixed in. Nothing but smiles and tapping toes when they start riffing!) This busy guy also works with many other Jersey Shore bands and band leaders such as Pat Guadagno (playing BobFest, a tribute to Bob Dylan, this coming May at the Basie!), Bob Burger (playing a Tom Petty Tribute at the Supper Club in March!), Sandy Mack (WonderJam on Sundays in AP!), Marc Muller (look out for DeadOn Live!), and too many others to list. Arne feels he is truly blessed to play with such talent and enjoy such variety!
Arne’s main makes his living as a cover musician. This is it, says he left the rat race at the end of 2005 and hasn’t looked back. 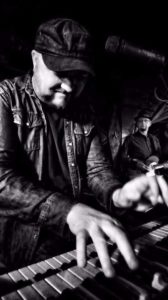 He does take part in and record with original artists as well. He played piano and organ on 4 songs on the last Darlene Love record, produced by Steven Van Zandt. As for styles, He’d call himself pretty well-rounded. “I’m no classical or bop player, though I certainly appreciate the music. If you play fulltime you play what puts bread on the table. Luckily, where we live there is a thriving music scene and I have the great privilege of mostly playing only music I enjoy playing. That’s not to say I will branch out and try other types of music, but I enjoy a great variety and am a bit of a “jack of all trades.” ”
So many musicians are proficient with a variety of instruments, Arne being one of them. He plays: keyboards/guitar/bass/vocals. He’s mostly self-taught, trained by ear although as mentioned he had some piano lessons early on.
When asked about preferred equipment: “Don’t get me started on gear, I’ll never stop talking. As for my main axe for keyboards, it’s a Nord Stage 2. It’s Scandinavian, like me! When it comes to other keyboards/guitars/basses/etc., I’m a bit of a collector, like most other musicians I know.”
The connections, communion, the symbiosis between band mates and audience is what gives Arne pleasure. Music is like a bug he says, you can’t get it out of your system, it saves people’s souls.
Although Arne has played throughout the area, he’s been known to haunt Tim McCloone’s Supper Club-Asbury Park, the Count Basie Theater- Red Bank, The Strand-Lakewood, as well as many bar/restaurants gigs like Jack’s-Belmar, St. Stephens, Spring Lake Heights, Harpoon Willy’s-Manasquan and too many others to list.
This well-rounded friendly guy does everything from solo to duos to small to large bands, almost any style. f unavailable for whatever reason, he knows all the best cats around! Give him a shout!