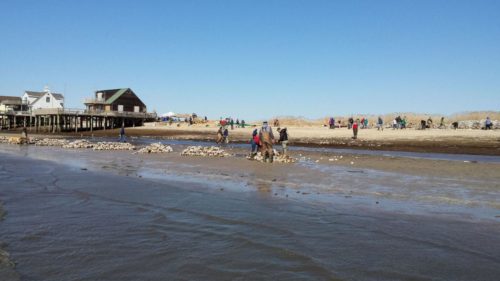 By Karen Knight, Cape May Herald ~

REED’S BEACH – “Build it and they will come” worked for Kevin Costner’s character in “Field of Dreams.” It appears to be working on the Delaware Bay where reefs built as part of Superstorm Sandy ecosystem restoration are attracting horseshoe crabs, Red Knots, oysters and other marine life.

According to Capt. Alek Modjeski, habitat restoration program manager, American Littoral Society (ALS), about 200,000 cubic yards of sand have been added to Cape May County beaches along the bay since Superstorm Sandy, along with the creation of man-made reefs to create shoals for spawning areas.

“These natural areas and small rural communities adjacent to them are experiencing the impacts of climate change and sea level rise,” Modjeski said.

“The work is also improving the ecological and economic resilience of Delaware bayshore communities,” he added.

In addition to restoring almost six miles of beach, there will also be two plans and eight studies generated from this project.

Twenty jobs will be created with half of them going to local veterans. Additionally, over 2,000 youths will be educated on the project’s impact, and 250 of them will be engaged in data collection.

The U.S. Fish and Wildlife Service (USFWS) has funded all of the Hurricane Sandy Coastal Resilience projects following the superstorm. The National Fish and Wildlife Foundation (NFWF) oversees the grants, dispenses funding and ensures project goals are met by grantees, such as the American Littoral Society.

Core partners on this project are Stockton University, Niles Smith Conservation LLC and the USFWS.

About $100 million was spent on restoration and resiliency projects in New York and New Jersey after Superstorm Sandy.

“These projects are looking forward to prevention in the next storm,” said Amanda Bassow, director of the Northeast Regional Office of NFWF. “At the outset, we get the right partners together to figure out the most effective way to restore and rebuild these areas.

“The resiliency of the people in these areas is tied to the health of the coast and the wildlife habitats,” she added.

In 2013, Cook’s and Kimble’s beaches were cleared of rubble and debris left behind and exposed by Superstorm Sandy. Following the cleanup, sand from local sand mines was trucked in and added to beaches with a grade and depth suitable for horseshoe crab spawning and migratory shorebird foraging.

The following year additional sand was placed. A reef will be built at Cook’s in the coming year.

Work on South Reed’s Beach began in 2013, and included rubble and debris removal and the addition of new sand graded to an appropriate profile, according to Modjeski.

In April 2015, an intertidal oyster reef was built as an experimental wave attenuation project. It has since been colonized by hundreds of oysters and other bay species.

The reef is made with bags of whelk shells, packed by local prison inmates and by veterans who are paid “to help them get back on their feet” according to Modjeski.

A “shell-a-bration” is held before the start of each project where workers and volunteers write their names and messages on the shells before they are put into the water. 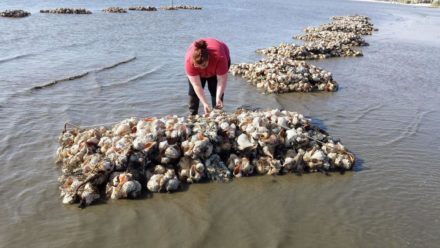 The bags of whelk shells are placed within 50 feet of the mean low water line, in two rows 50 feet apart. The 10-foot-long bags are spaced about five feet apart, which gives the horseshoe crabs enough room to go in and out of the shoreline to lay eggs.

Together, both reefs were made from 2,500 bags of shells. Each bag has about 40 whelk shells.

“Last winter we had three feet of ice over the reef, and we were worried about what the ice would do to it,” Modjeski said, “but it survived.”

The reefs are also named, usually in honor of a veteran. The reef at Reeds Beach is called Vet Reef, and Modjeski said a reef in Dyers Cove, Cumberland County, was named Coasty Reef this Veterans Day in honor of a man who lives nearby.

Stockton University Coastal Research Center is one of the groups studying the projects. It measures waves and assesses sediment movement to ensure the work is not washing out into the bay.

Niles Smith Conservation, LLC, is studying shorebird use and horseshoe crab egg density. The ALS is studying reef biodiversity, fish use, and oyster recruitment; some of these surveys are assisted by Stockton students and military veterans.

Modjeski said about 18,500 horseshoe crabs have been tagged since the hurricane and there are signs of more and denser egg clusters for the Red Knots to feed on their 9,000-mile migration from the Arctic to the southern tip of South America.

“We’ve evolved as this work has been going on, and policy has evolved, too,” Modjeski said. “We’ve used local contractors to do the work, helped our vets, and restored our beaches. We all benefit from the bay, and we’ve seen that we’ve made a difference.”