The Sounds and Talents of the Jersey Shore-Jeff Pecca 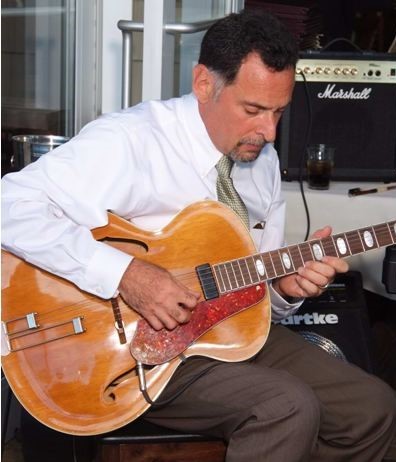 By Sharon Merkel Prudhomme ~
For those not familiar, I’d like to introduce a former fellow New Providence (AKA New Provalone) pal, Jeff Pecca. Originally from New Providence, NJ, Jeff now hails from the Shark River area. And we’re sure glad he does!
Jeff had an early start in the music world, beginning his piano lessons at the ripe old age of 5! His lessons of ticklin’ the ivories spanned for 7 years until 12 at which point he moved on to the guitar. After a few lessons, Jeff was into playing rock & blues styles which was mainly a self-taught learning. His new-found talent with guitar in hand, landed Jeff a spot in his first band by 6th grade! Moving into an interest in jazz, Jeff began a couple of years of lessons from well-known jazz guitarist, Harry Leahey. Harry is well-known for playing with Phil Woods, a proficient saxophonist among others. Thereafter, Jeff began studying jazz privately for several years. 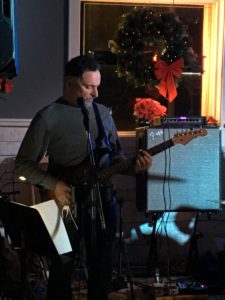 Although not top on his list, his love and interest in music brought about learning both the 5-string banjo (one of my personal favorites!) and the pedal steel guitar some years ago. Jeff admits he’s not really kept up much with either.
Growing up, Jeff was inspired by a few great classic rock musicians such as Eric Clapton, Jimi Hendrix, Jimmy Page and Alvin Lee. Not really favoring a particular guitarist, Jeff’s favorite rock band is Steely Dan.
Jeff’s personal top picks of guitars are the: G & L (Leo Fender) Comanche solid-body Gibson L5-CES jazz guitar 1953 Epiphone Devon jazz guitar Collins OM-2H acoustic Takamine electric/acoustic He says that if choosing a favorite guitar, it would have to be the ol’ Epiphone jazz guitar with its great acoustic and electric tone. Not really favoring any particular brand as it depends on the style of music he’s playing. Although he does admit he is old school, preferring both Gibsons and Fenders.
Jeff had played in local rock bands throughout his high school career and these days enjoys playing rock covers and jazz standards. I was fortunate to enjoy a “jazzy dinner” not long ago listening to Jeff play in a 3 piece jazz trio-SeaNote Jazz- at Grandma’s Meatball, Manasquan with his lovely wife, Patricia. What a great night breaking away from the usual classic rock and oldies!
Jeff is currently a member of the local classic rock band, Ronnie and the Engineers, a five piece group. Previously playing for about 5 years with the band, “Dry Ice”. He also freelances with various jazz groups when the opportunity arises. Occasionally Jeff has stepped in to play an open mic as well as sitting in with a few local bands and jazz groups here and there. Not usually playing solo at this point although Jeff says he is moving towards more solo gigs. 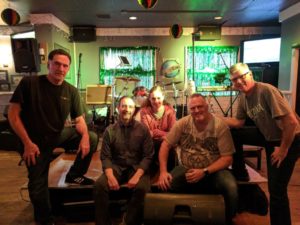 Playing in front of a live audience Jeff says gives him a kind of rush as well as satisfaction when the show goes well and folks are into it, dancing and enjoying the selections. He will take requests if he’s familiar with the song. Jeff and the band have a following which, is clear judging by the number of New Providence peeps that show up for their gigs! Ronnie & the Engineers play on a regular basis at Reef & Barrel, Manasquan. They’ve been booked also locally at St. Stephens Green- Spring Lake Heights, The Tap Room- Warren, Woody’s Roadside-Farmingdale, Ryan’s Pub- Monroe, and The Vibe- Hazlet. Jeff says the band will travel depending on distance and pay.
Jeff along with others in the band are in fact employed full-time as engineers by trade, however, rumor has it Jeff will enjoy more play time in the VERY near future as he’s retiring! This will offer more time for both the band and jazz bookings for private parties, grand openings, birthdays (already booked for a 60th coming up), anniversaries, retirements, and various events.
Be sure to check out both Facebook pages and give ‘em a like!
https://www.facebook.com/RonnieAndTheEngineers/