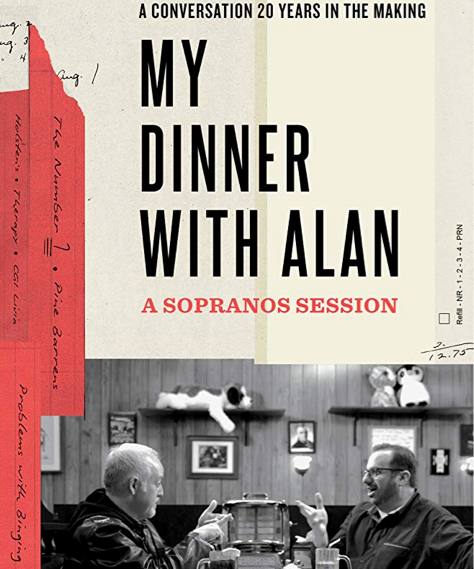 Bada Bing! The 17th Annual Garden State Film Festival (GSFF) is THRILLED to announce that it has added a FIFTH DAY this year and is presenting a SPECIAL SCREENING of the EAST COAST FILM FESTIVAL PREMIERE of MY DINNER WITH ALAN: A SOPRANOS SESSION, with Freeholder Director Tom Arnone acting as host for the evening on Wednesday, March 27th at 7:00 p.m. at the Jersey Shore Arts Center in Ocean Grove. The timing of this exciting event is serendipitous, as fans worldwide are celebrating the 20th Anniversary of THE SOPRANOS television premiere (the first episode aired in January 1999, and life has never been the same). The Garden State Film Festival is especially proud to be able to screen this fabulous film in Tony Soprano’s home state. GSFF is scheduled to screen over 245 independent films from around the globe at multiple venues in Asbury Park, March 27-31st, 2019.

On the eve of the publication of their book THE SOPRANOS SESSIONS, TV critics Alan Sepinwall and Matt Zoller Seitz meet at Holsten’s restaurant in Bloomfield, New Jersey, the location of the controversial last scene of THE SOPRANOS. Their wide-ranging conversation covers television, movies, psychiatry, gangsterism, their 20-year friendship, and their experience covering the series for The Star-Ledger of Newark, the newspaper that Tony Soprano picked up at the end of his driveway. The screening will be followed by a discussion between THE SOPRANO SESSIONS co-authors Alan Sepinwall and Matt Zoller Seitz and My Dinner with Alan director Kristian Fraga.

This exciting evening will also include a BOOK SIGNING by both authors, with proceeds to benefit GSFF. The book was published by ABRAMS to coincide with the 20th anniversary of the series premiere and made the NY Times Best Sellers List! THE SOPRANO SESSIONS includes a series of new long-form interviews with series creator David Chase, selections from the authors’ archival writing on the series and explores the show’s artistry, themes, and legacy, examining its portrayal of Italian Americans, its graphic depictions of violence, and its deep connections to other cinematic and television classics. The book is available for PRE-ORDER for the Book Signing (cost is $25.00 and guests must be present at the event, books will not be shipped). Please visit: https://www.brownpapertickets.com/event/4094178. Books will also be available to purchase on site while supplies last.

More About The Film:

Now in its 17th year, the Garden State Film Festival, is New Jersey’s premier independent film festival® and was founded to promote the art of filmmaking on all levels by showcasing a wide variety of film, video and animated works, as well as provide educational programs in the creative arts to the public by industry leaders.

The Festival’s events are listed along with the complete film-screening schedule on the GSFF’s website at: https://2019.gsff.org

GSFF anticipates over 20,000 attendees this year and promises its most exciting event yet! For more information, please visit www.gsff.org

About The Garden State Film Festival:

The Garden State Film Festival (GSFF) was envisioned by 25-year film industry veteran Diane Raver and the late Hollywood actor Robert Pastorelli in 2002 and launched the following year. Since 2003, thousands of films have made their public premieres, hundreds of thousands of people from around the world have attended; and the total infusion of cash to local businesses since inception exceeds $5 million. It is held in Asbury Park and surrounding area. The GSFF is a 501-c-3non–profit organization. For more information about the Garden State Film Festival, contact: info@gsff.org