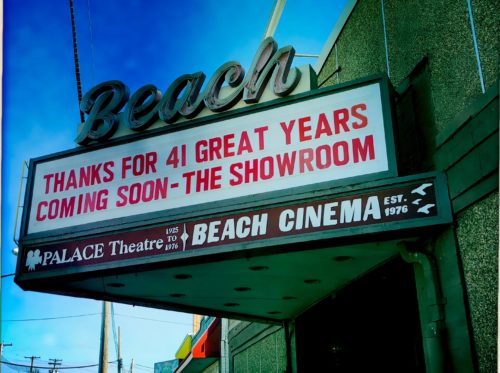 As Jersey Shore locals, there are certain landmarks in Bradley Beach that we all know and love – Vic’s Pizza, the old Masters (now Del Ponte’s) bakery, the Beach Plum ice cream parlor and even the bowling alley!  But nothing is more iconic than the Beach Cinema movie theater.  Originally opened as the Palace Theatre in 1915 as a vaudeville theater, it began screening silent films in 1925.  The motion picture venue became the Beach Cinema in 1976 and was the last of the single-screen movie houses in full-time operation in Monmouth County through much of the 20th century.

When John Esposito, who had owned and operated the theater for the last 40 years, began to think about retirement, he knew he could probably make big money by selling the building to a developer but he was intent on keeping it a movie theater.  And so began his conversations with Mike Sodano and Nancy Sabino, owners of Asbury Park’s independent film house The Showroom.  After a few years of discussion, Mike and Nancy agreed to take ownership of Beach Cinema. 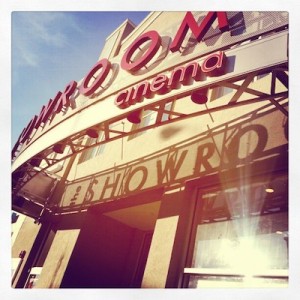 A smart business decision as well as another example of their true love of film entertainment, the purchase gave the new owners a chance to expand their well-regarded arthouse brand established in Asbury Park to this neighboring Monmouth County town.   Bradley Beach is lucky to be reaping repercussive rewards of Asbury Park’s current renaissance.  Formerly a quiet shore retreat, Bradley Beach is experiencing a renaissance of its own as an urban downtown with affordable entertainment. As an economic engine, the movie theater is an important component to the city’s continued growth.  Mike and Nancy are excited to be a part of the Bradely Beach community and have already received a lot of support from other community members, such as the schools and library, who have expressed interest in utilizing the new theater to jointly engage the residents of Bradley Beach.

Not only does the purchase of the theater give the Showroom a fourth screen on which to show films, it is also a great opportunity to make the theater shine.  Programming is key to making a small theater successful. Smaller seating in the Asbury Park location limited the selection of films that could be shown. The Beach Cinema’s 576 seats now expand the films that can be offered.  The Showroom audience broadened when the Beach Cinema closed and Mike and Nancy are thrilled to bring The Showroom’s high standards to that audience in the new location.

Of course, that means renovations for a planned mid spring opening.  For now, the new Showroom Cinema Bradley Beach will remain a single screen venue.  Scheduled modifications include modernizing the lobby and concession stand, refurbishing the seats and a new ticketing system for buying tickets in advance on line.

As Mike likes to say, beside church, seeing a movie in the theater is one of the last shared human experiences you can have.  And he and Nancy are committed to bringing that communal experience to Bradley Beach.  Hope to see you….. at the movies!