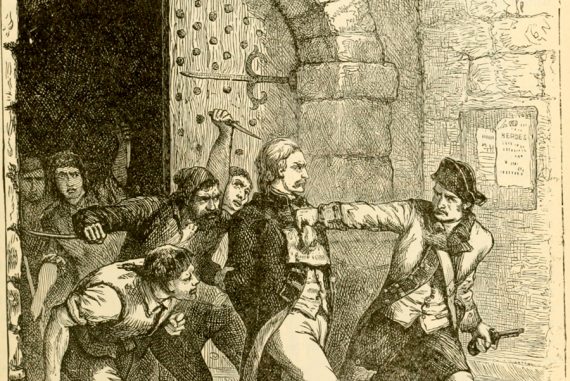 It was April 12, 1782 at Gravelly Point in Highlands, NJ.  The Revolutionary War had ended at the battle of Yorktown, where Washington defeated British General Cornwallis, last October.  Loyalist “Captain”, Richard Lippincott sat watching his neighbor, Joshua (Jack) Huddy, writing his last will and testament on a barrel head.  Directly over Huddy, draped over a tree limb, was a noose. 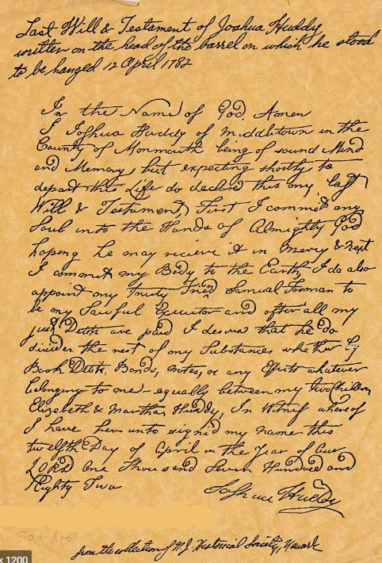 As Richard Lippincott watched Huddy writing out his will, he must have been struck by the man’s demeanor.  He was eerily calm, sitting beneath that noose.

Earlier that day, Lippincott, and his band of loyalists, under the orders of William Franklin, the President of the Board of Associated Loyalists, the last Royal Governor of New Jersey (and Benjamin Franklin’s son,) proceeded to the British man of war, Britannia, anchored at Horseshoe Cove, Sandy Hook and demanded that Captain Moore hand over Jack Huddy and two other Patriots, Daniel Randolph and Jacob Fleming for a prisoner exchange. 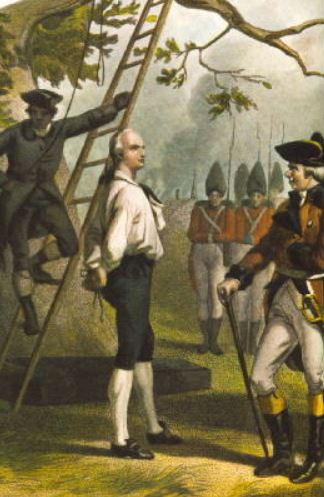 This was a ruse.  Lippincott knew that Huddy was to be executed in retaliation for the death of a wealthy Freehold loyalist farmer, Philip White.  In truth, while White was indeed a farmer by vocation, he enlisted in the British Army and received his commission on March 27, 1777.  He was in command of the schooner Hero’s Revenge of which he and Daniel Sickels were principal owners. Philip also held a commission as prize master of the schooner Wasp when it was stationed in the vicinity of New York.  He was killed attempting to escape a Patriot force, supposedly led by Jack Huddy on March 30, 1782.  However, Huddy was captured by British forces at the Battle of the Block House (Toms River) on March 24, 1782. 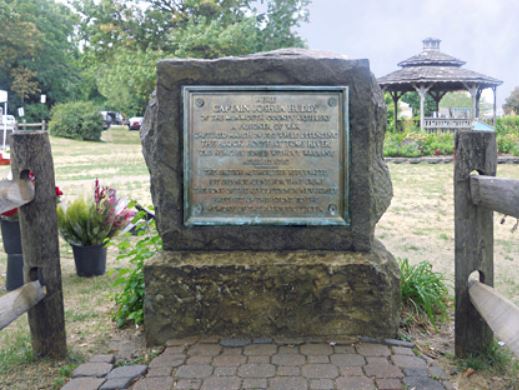 Huddy, Fleming, and Randolph were ironed and hustled into a longboat manned by 16 Loyalists and Lippincott and ferried across Sandy Hook Bay to Gravelly Point in, what is now,  Highlands, NJ.

Jack had finished his last will and testament.  He handed it to one of the Loyalists who promised to bring it to Freehold for probate.  He strode over to Lippincott and, remarkably, shook Lippincott’s hand.  According to witnesses Randolph and Fleming, Huddy climbed up on to the barrel.  The noose was placed around his neck.  Looking at Richard Lippincott, Jack Huddy said that he was innocent of Phillip White’s death and that “I shall die innocent and in a good cause.” With a mighty heave, Jack Huddy, patriot hero, was hoisted into the air, and slowly strangled to death. 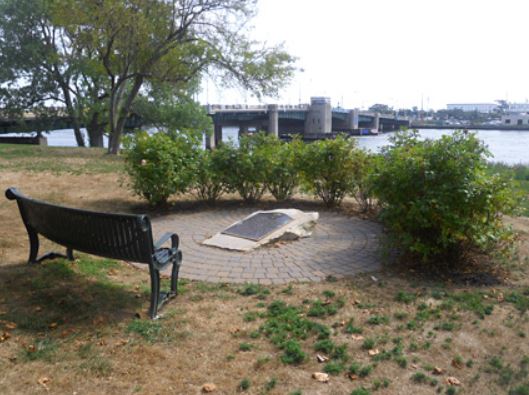 The next day, Patriots found his body hanging from the tree.  A note was pinned to his corpse:

“We, the refugees, having long held with grief the cruel murders of our brethren, and finding nothing but such measures daily carrying into execution; we therefore determine not to suffer without taking vengeance for the numerous cruelties, and thus begin, having made use of Captain Huddy as the first object to present to your view, and determine to hang man for man while there is a refugee existing.  UP GOES HUDDY FOR PHIL. WHITE.”

More than 400 people attended Joshua Huddy’s funeral and burial at Old Tennent in Freehold.  They paid their respects to the hero, but they were also there to protest his murder at the hands of the Tories. 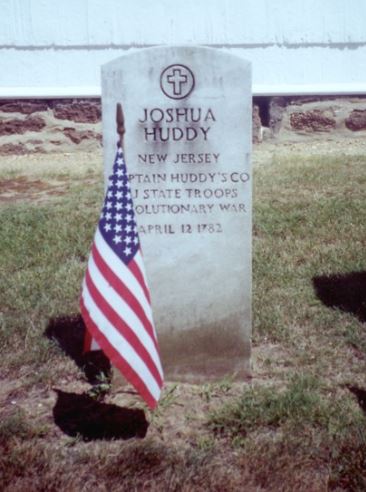 On April 14, 1782, George Washington received a letter from the citizens of Monmouth County describing Jack Huddy’s murder.  They demanded action or they would seek revenge on their own.  Washington and his superior officers unanimously decided that an officer of equal rank had to be hanged in retribution for Huddy’s death.

In a letter to the commander of Lancaster Prison Camp, General Moses Hazen, Washington ordered that a prisoner (a Captain in the British Army) be chosen and hanged in retaliation for Huddy’s Murder.  General Hazen left the matter to chance.   19-year-old Captain Charles Asgill, an heir to a fortune in England, was selected by the hand of fate.  He and 12 other prisoners drew lots from a hat.  Asgill’s read “Unfortunate”. 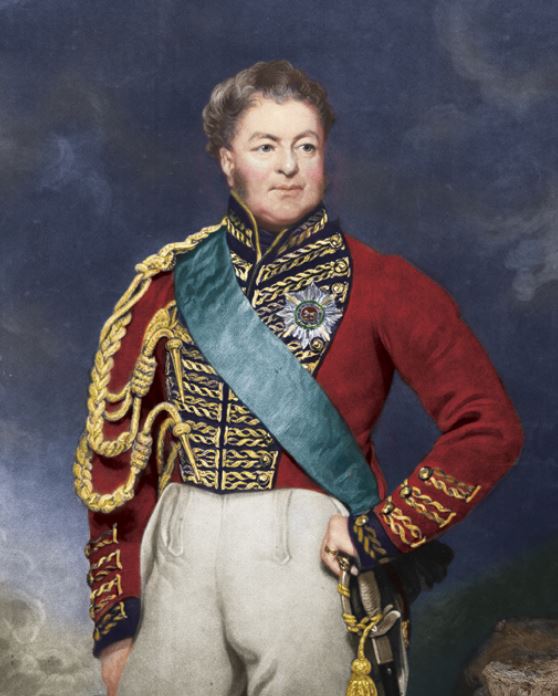 Washington was concerned about how Asgill’s hanging would be interpreted.  He tasked Congress with the responsibility to determine Asgill’s fate.  Meanwhile, Asgill’s mother, Lady Theresa Pratviel Asgill, began a formidable letter writing campaign on behalf of her son.  One of the recipients was the French foreign minister, the Count de Vergennes, who intervened on behalf of Captain Asgill.  Congress, after much deliberation, freed Asgill. 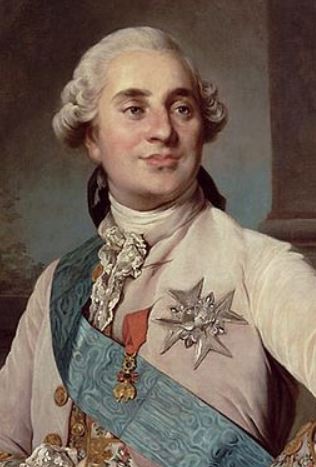 The Asgill Affair, as it became known, nearly crippled the tenuous peace between the United States and Britain.  Charles Asgill went on to become a prominent General in the British Army.  Richard Lippincott was granted an estate in Canada by the British Crown and was never punished for the murder of Joshua (Jack) Huddy.

To learn more about Jack Huddy:

For more about Philip White:  https://www.thefreelibrary.com/Revenge+and+retribution%3A+…+the+death+of+Philip+White%2C+New+Jersey…-a030083299