The Interesting History Of Sea Girt 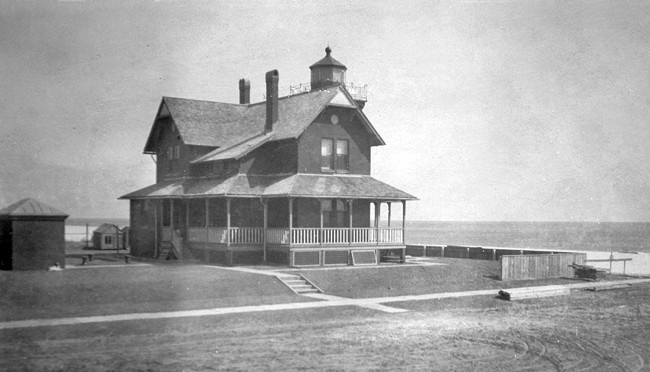 Our local history is rich and interesting! We all know Stockton California, Stockton Inn, Stockton College, Stockton Lake and the Stockton Rest Stop on the Turnpike but few are aware of who these places are named after. Commodore Robert Field Stockton is known as one of the first families and descendant of a signer of the Declaration of Independence. The commodore had amassed quite a portfolio of estates at the ripe old age of 57 after his naval officer career. He was quite proficient in the building of canals and railroads, as well as pushing to bring through propeller-driven steamships. 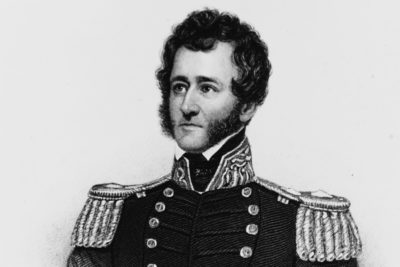 Stockton did a brief stint as a New Jersey Senator before resigning in 1852. The Commodore owned a winter residence in Princeton called Morven, which was purchased in modern years by New Jersey State. Keeping the name, Morven is open to the public as a museum holding many Stockton artifacts some of which have been on loan from the Stockton family here in Spring Lake. (The last of the local Stockton family recently moved to Mass. from Spring Lake.) The commodore also owned a townhouse in London as well as another winter home in Philly.

Sea Girt was named by Commodore Stockton after he purchased land in the area in 1853. But, long before the white man settled in on this Jersey Shore spot, the Lenni Lenape Indians inhabited the area. The tribe once held its annual feast on the beach at the North East section which is now Sea Girt. This yearly affair even continued with early settlers. This tradition was held the 2nd Saturday in August known as the Big Sea Day, (what a cool tradition to bring back to the dunes!) 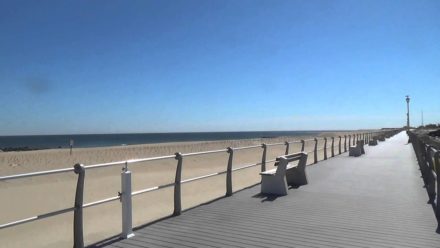 In the 19th century, there were two major farms here. One, which is now the Boro of Sea Girt, was owned by Dr. Charles Montrose Graham from NYC and called the Bell Farm. The 2nd farm was owned by John Sherman which then was sold to Commodore Robert F. Stockton in 1853. This was his summer home and was between the inlet to the north and the Manasquan River to the south so he called it Sea Girt.

Sea Girt means surrounded or enclosed by the sea. Back then his ‘home’ had great lawns right to the beach with two bathhouses on either side. Stockton called it his Beach House. The story goes that Mrs. Stockton would not spend a night by the ocean, so the old farmhouse close to the railroad was refurbished for her.

In 1866, Sea Girt appeared on Commodore Stockton’s deed in 1866, while Ocean Side was the name for Dr. Montrose’s Bell Farm. Three years later the Sea Girt Land Improvement Company began. This company assisted in bringing the railroad to Sea Girt in 1875. Sand from the beach was used to make the concrete for the construction of the original station. Today the town library is housed in another station built at a later date.

After Stockton’s death, the beach house became a hotel, known as the Beach House Hotel in the mid-1870s. The original Stockton home was then flanked on both sides by two new five-story additions. It became quite an upscale destination for the likes of General Grant and Commodore Vanderbilt. 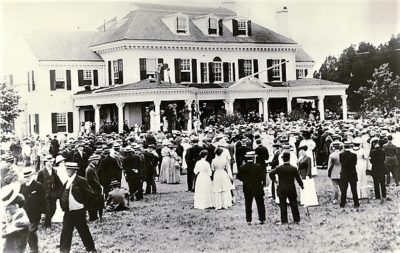 So many changes were going on in these years! 120 acres was purchased by the legislature in 1887 for a whopping $51,000 which laid out a camp or home for the rifle range and seacoast battery for the National Guard of NJ. In 1939 after the annexation bill passed, the camp would become the “summer capital” of New Jersey. Governors spent summers here and while enjoying his relaxing days at the shore, Woodrow Wilson first learned of his nomination for President.

A farmhouse from the Stockton Farm was used as the first Governor’s cottage. This place of ease was brought to a halt by WWII. A lighthouse was built after the government acquired land on the beach in 1895. Later in 1909, lots in Sea Girt were sold off for summer homes by the investment company known as Sea Girt Company. Later in 1917, Sea Girt was officially incorporated. Before that, Sea Girt was part of Wall Township. 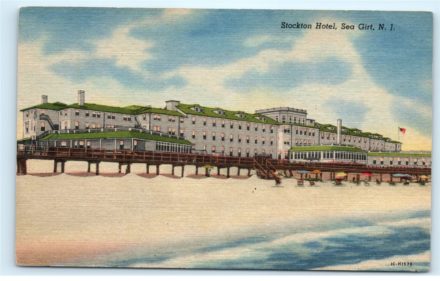 Eventually, by 1920, the erosion brought the ocean slapping the edges of the foundations as the building fell into disrepair. The ol’ gal was snapped up at auction by Nora Stubbs who was quite the businesswoman for her time. She had the original Stockton beach house demolished. She had both the side wings moved back 100 feet and joined creating an entrance in the center. This brought new life and again was the popular spot for many high-profile folks. It is reported that the famous comedian, Fred Allen frequented in the ’30s and ’40s.

By the 1960s, the structure was fast becoming obsolete in amenities compared to accommodations being built nearby. Frank Palmieri, the owner at the time, requested permission to raze the structure. Eventually, the hotel items were auctioned off with demolition right around the corner. Then, on September 23rd, 1965 a fire began! 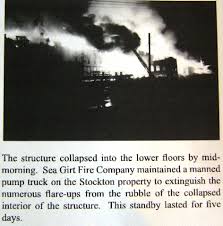 This was a horrendous fire with a relentless wind whipping off the ocean fanning the blaze in this huge building. The ‘Stockton’ fire brought 43 fire companies and first aid from Monmouth and Ocean counties. Crowds of onlookers and numerous boats full of onlookers sat ocean side to watch as the flames took hold. Luck would have it that with a wind shift blowing out to sea along with a watering down, nearby homes were spared. The end of an era!