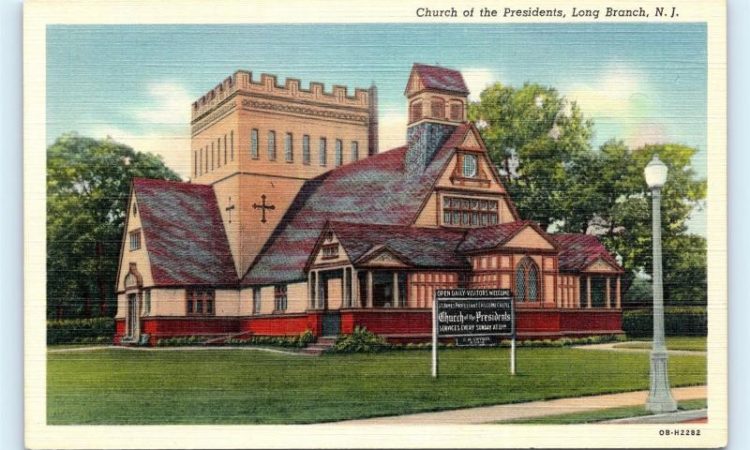 By Muriel Smith ~
They didn’t all necessarily worship there, but St. James Protestant Episcopal Chapel earned the nickname The Church of the Presidents because of the seven Presidents of the United States who vacationed in Long Branch and are associated with the area and its magnificent Carpenter Gothic style Church.

Consecrated in 1879 as a branch of St. James Episcopal Church, the Church of the Presidents was designed by the firm of William Appleton Potter and Robert Henderson Robertson, who were famous for designing some of the many luxurious summer homes in Long Branch and along the Jersey Shore, the retreat of wealthy Americans including the Goulds, the Drezels, the Vanderbilts and Sloans during the late 19th and early 20th centuries.

The beauty and salubrious air of the seashore was also the enticement for all but three United States Presidents from 1870 to 1921 to get a respite from the heat and drudgery of the work of the nation at the Capitol. Presidents Grant, Hayes, Garfield, Arthur, Harrison, McKinley, and Wilson all took advantage of the relatively short distance by train from Washington DC to the Jersey Shore.

Presidents Cleveland and Wilson, most likely because they were New Jerseyans and had homes of their own in the Garden State, and Theodore Roosevelt, who had a magnificent estate in New York, are not recorded as having visited the Church or Long Branch.

But the Church itself, where it was not unusual to see an $8,000 Sunday collection during the last part of the 19th century, was in financial straits just before the Depression. At that time, it was saved by generous benefactors who believed in God and saving His place of worship. However, the salvation was temporary as the Church recorded fewer than 40 members after World War II, making it difficult, if not impossible, to keep up the structure. Out of necessity, it was doomed for deconsecration and demolition by the Church hierarchy.

It was only after local residents and visitors, with a pride in local history, names still well known in Long Branch today, Dinkelspeil, Slover, Snyder, Anastasio, and others like them, found a clause in the original papers that required the building be returned to descendants should it ever not be a church, that the historic edifice was saved. Descendants of the original owners were found, negotiations made, and the building was saved.
The Long Branch Historical Association was formed in 1955 and since then, massive efforts, hard work, and generous grants have preserved the building, it has been named to both the New Jersey and National Registries of Historic Sites, and work continues today. The Historical Association is relentless in its drive to bring the building back to its place in history.

Maintained by the Historical Association, the building remains closed while work continues to ensure its stabilization, reinforcement with concrete and steel, together with roof repairs and repairs to the bell and belfry. Once the building is secure and preserved once again, the two Tiffany stained-glass windows and other artifacts that were part of the original church will be returned to their places within the church. Then the Church of the Presidents will continue to tell the story of one of the most historic of the many historic churches that are part of communities along the Jersey Shore.