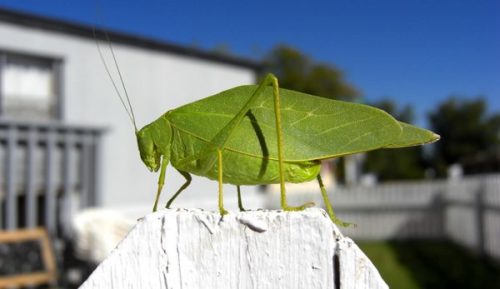 The cool sounds of insects, birds and thunderstorms are all part of summertime. One in particular, although being one of my ultimate favorite & cherished sounds, was always kind of sad at the same time. The Katydid, a wonderful beauty of green always marked the beginning of the end of summer.  As a child going to sleep in summer I found it almost comforting listening to the “music” while drifting off. To this day, I prefer to have the bedroom windows wide open at night to listen. As my dad (one who lived by nature) and farmers of yesterday always said, when you hear your first Katydid, it’s 6-8 weeks till the first frost. Growing up we counted ahead on our calendars and marked the date. And lo and behold, usually right on the money, came the 1st “frost on the pumpkin!” 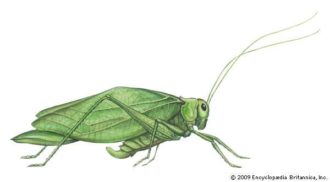 Now unlike Cicadas who “chirp” or “chchchchch” loudly from the trees during the hot summer daytime, Katydids are the nighttime musicians. Some may drop off syllables, but most will be heard singing back & forth, sounding much like “Katy did, Katy didn’t, Katy did, Katy didn’t”, which is how they were named! Not too sure what Katy did, but she sure left an impression! Ha!

Katydids are large thick green insects with narrow but tall bodies. Their hind legs are super long with short front and middle legs making them pretty good jumpers. Good thing for jumping as they are like clowns when attempting to fly. Being poor in-flight makes for easy prey, which is why Mom Nature gave them perfect green, sometimes brown coloring. Their cammo allows them to almost disappear on the leaves they feed on. They are prey for bats, birds, wasps, spiders, ants, tree frogs and praying mantis so jumping skills sure come in handy!

There are hundreds of Katydid species that are found worldwide. Spending their lives in and on plants they eat requires climates with lush foliage. Basically, where there are plants, there are Katydids. Studies show at least 20 species living in Michigan alone! Unlike the Cicada who moves through stages (metamorphosis) & emerges from his molt as a winged adult, the Katydid has an incomplete metamorphosis.

When hatching from the egg, the Katydid looks much like the adult without wings. As it grows, they molt and gain wings becoming an adult. In the tropics, Katydids may live for a few years. In our northern areas, 1 year or less is the lifespan. Their eggs, however, will survive the winters, emerging and starting the cycle over again. 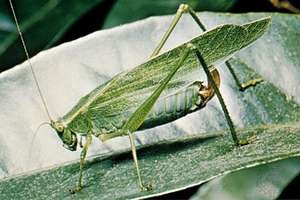 Katydids live a solitary life, other than mating, they’re on their own. Sound, of course, is communication and often many males will sound off for quite a distance to attract females. Their front wings have special structures that when rubbed together make sounds. Males are the primary sound producers and can also communicate through vibrations. They may resort to vibrating to communicate when in danger of being detected by enemies.

A Katydid can ‘hear’ via flat patches on their legs called a tympanum. Often people mistake a spear-like piece on the end of their abdomen for a stinger. Katydids do not sting. These appear on the larger Katydids, females; the long part is actually their egg depositor or “ovipositor.”  Females use this to deposit their eggs into the ground and into the stems of plants.

Sadly, Katydids are among the many insects to reach endangered levels. I feel this is largely due to humans’ need for the perfect lawn. These wonderful little creatures, as are lightning bugs, being wiped out by lawn care products. The eggs and larvae don’t stand a chance. Years ago the outdoors would be sounding off with hundreds upon hundreds of Katydids on a warm summer night. Now, I’m lucky to hear one in the distance….with not an answer to his lonely calling.

My motto-if it’s green, mow it. Got a bare patch? Throw clover seeds- green and lush and help out the honey bee population! Back in the day, we used a long-handled hand tool with a V on the end. It was for removing dandelions and their long taproot. Also, there was a long see-thru’ plastic tube with a metal point that retracted when tapped on the ground. Weedkiller was filled in the tube and you would place the pointed end down on the undesirable weed, push and a little killer was released ONLY on that particular weed. The entire lawn wasn’t blindly blanketed in weed killer.

Now with summer in full swing, sit back, grab an adult beverage and enjoy the sounds of summer!

Relax And Re-Charge at JSAC!