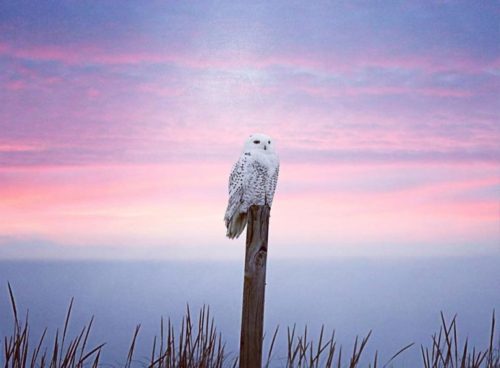 I am so happy to share this story that WHYY reported on:

After gracing the Jersey Shore with their presence during recent winters, the majestic snowy owls have returned.

Experts say the birds prefer open fields, beaches, and sand dunes, all of which are similar to their native habitat. The snowy owl hails from the Canadian tundra, according to The Raptor Trust, a non-profit bird rehabilitation facility based in Millington, NJ.

The facility provides the following description of the bird on its website:

When perched, the bird has a smooth, heavy appearance. Its head is rounded and lacks feather tufts. It has bright yellow eyes, a black beak, and thickly feathered legs and feet. The female is larger than the male, as in all owls, but the recognizable difference is that the adult male is almost pure white, while the female has dark, heavy flecking.

They’ll visit New Jersey more often if the availability of food — including mostly lemmings, but also rabbits, rodents, birds, and fish — in the Arctic region is low, as explained on The Raptor Trust’s website:

These winter visits to our state depend on the availability of food in its Arctic home, not on the severe weather there, which the bird is well equipped to endure. Periodically, in cycles of from four to eight years, the populations of the Snowy’s usual northern prey species decline. Then these owls begin a southward movement in search of food, and we are afforded a chance to see one of nature’s masterpieces.

Experts say to keep your distance from the birds, as they may be hungry, tired, and stressed from their long journey to the area.

In 2014, an influx of photographers walking on dunes in Island Beach State Park prompted a state official to remind the public to respect the fragile ecosystem.

“Many folks are tempted to leave the marked trails and trek through and over the dune system in an effort to find particular birds. Any foot traffic will impact a dune — any traffic,” then park manager Ray Bukowski said. “Each footprint will destabilize the sand and cause erosion, one step will destroy a dune grass plant or break a vital rhizome which knit the dune and stabilize the structure.”