Sharon Lasher – A Set of Lungs Not to Miss! 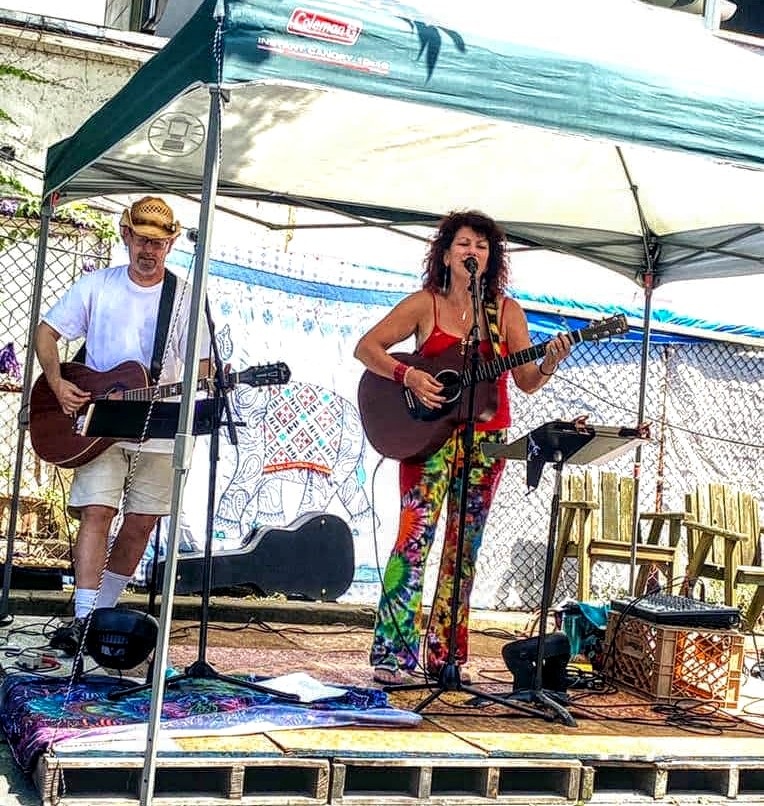 Once in a while, we stumble upon special people that possess such truly amazing talents and skills that just blow us away! Historically, New Jersey seems to “grow” many remarkable and memorable individuals. I’ve been lucky to have met many local greats in many fields, one special person I’d like you to meet (if you haven’t yet) is a lively energetic redhead who lights up any stage with her robust vocals! 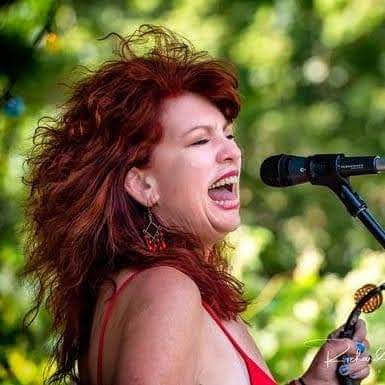 Sharon Lasher has all the bells and whistles going on as soon as she steps on stage. She exudes vibrant energy into the air which moves and energizes all those around her! Presently living in the Jersey shore area, Sharon was raised in West Orange, which she tongue-in-cheek refers it to be the “center of the universe.” Growing up she spent summers in Lavallette with weekly trips of crabbing and fishing the strip from Brielle to Long Beach Island.

Growing up in a musically inclined family who incorporated song and music into daily life sure encouraged Sharon and her siblings to shine. She mentions that her parents had a love of singing, knowing the words to about every song written before the ’60s. The entire family was self-taught. Sharon says she doesn’t remember a time NOT singing as there was always singing and music flowing throughout the house and neighborhood!

She professes to be a great student and acknowledges learning from everyone she listens to. Although she sight reads, she says one regret is not learning to read music. She’s got warm memories of sitting on the neighbor Thatcher’s front steps and hers, playing guitar and singing 3 and 4 part harmonies. Kind of an Andy Griffith Mayberry scene. An older brother, Michael, according to Sharon is monstrously talented with the mandolin and ukulele and has the ability to pick up any instrument and play it! Her sister Christine has a great voice although Sharon says she doesn’t always share it unless coaxed a bit.

Early on, being involved with team sports left no time for participating in the school plays as scheduling times overlapped. However, performing with the Community Theater and chorus was coordinated into her busy schedule. When 7th grade came around, Sharon and friends taught themselves to play guitar and together they began the 5:30 pm Saturday evening Folk Mass at Our Lady of Lourdes Church. These energetic kids “brought” the Beatles and Simon & Garfunkel into their church! High school years found her singing at weddings and funerals.

The musical abilities and talent have carried through to both of Sharon’s children. Son, Connor, enjoys playing bass and guitar as well as singing while living in NYC working as a sound engineer. In her senior year, Sharon’s daughter, Rachael, won individual awards at the National High School Show Choir and Band Competition and The National Heritage Foundation! Rachael currently sings with a choral group in NOLA.

When asked what style of singing best describes her, Sharon says she naturally leans towards the Blues. One major influence has been Bonnie Raitt’s musical and personal style. Loving all kinds of music to sing and listen to is her thing. Growing up with Nat King Cole, Andy Williams and Tony Bennett opened her eyes but watching live performances on TV of Glenn Campbell, Dolly Parton, Sonny and Cher, Smothers Brothers really hit home.

Next up on her scene were heavy hitters like Jackson Browne, Bruce Springsteen, Bowie, Beatles and CSNY. The likes of which Sharon feels influenced her own style and selections of what and how she sings a song. Sharon feels her interpretation and performances have been influenced by each different group of musicians she plays with as they each bring their own “flavor” to the stage. She notes that she’s a lucky lady to live amongst the Jersey Shore music scene where top-notch, world-class musicians abound! She’s had the opportunity to sing with the very best! I must agree! I’m often overwhelmed by the gobs of local talent!

Her first band while in her college years was Sunset Boulevard. In southern California, she sang with the Saddleback Concert Chorale under the direction of Alvin Brightbill and performed Handel’s Messiah with the Los Angeles Baroque Orchestra.

Ms. Lasher is drawn towards music whose melodic rise and fall express emotions, bringing the words to life. She says it’s all about mood, which, when singing beautiful ballads tugs at the heartstrings and a noisy room gets quiet as heads turn to listen. Aside from a mellow ballad, Sharon Lasher can rock! When asked who she would compare herself to, she sees it as Bonnie Raitt. A love of interacting with the audience makes her what I call an approachable act, as Sharon often invites others to join her on stage for a song.

I’ve long carried a set of spoons with me and have been known over the last 30 years to break them out for a little side percussion sound! Ha! I was happy to find that Sharon also carries spoons, a tambourine and several small hand instruments which occasionally if she isn’t using will offer to others to join in the fun! It’s what it is all about! Feeling the fun and being a part of the fun.

Sharon hopes her audiences feel the connection, emotion or mood she tries to send during her shows. Choosing songs that move her and bringing those feelings to listeners is what’s important to her. She mixes it up in the emotion department! From playful to sassy or heartbroken this lady gives her all and it surely shows. Seeing her songs and interpretation moving the audience is a rewarding pleasure. For a dozen years, she has been steadily building a following and has been drawing folks back time and time again!

Earning the respect of her peers and often being invited to sing when going out to listen to her favorite bands brings Sharon great enjoyment. She says music and her singing bring a balance to her life. It helps to work through emotions and express how she feels.

Music and singing take center stage now after retiring from teaching science in Special Education for 30 years. A true love of the outdoors, Sharon is an avid kayaker, birder, gardener and traveler. She can usually be found paddling about, singing to the flora and fauna. One can always spot her car by the mounted kayak on the top in the warm months. 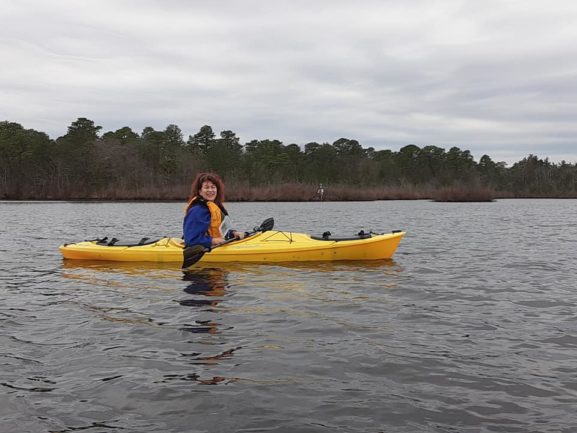 If you’ve yet to listen, the following are but a few of the venues Sharon Lasher performs. Her band, Sharon Lasher and the Flashers are wowing listeners at each gig. We enjoyed them often at: The Wonder Bar, McLoone’s Supper Club, Danny Clinch’s Transparent Gallery, The Stone Pony, Jenkinson’s, Asbury/Wall Elks, Asbury Jazz Fest as well as many other venues. You may see her sing the National Anthem at Monmouth University basketball and football games! She’s even done a show in French!

When asked how far she’ll travel for a gig, she says they’ll travel anywhere if the vibe and pay is AOK. For several years Sharon has been singing throughout Ireland.

Sharon Lasher is available for all your music needs and events! From weddings, funerals, grand openings, anniversaries, baseball games, private parties, receptions and more. You can catch a preview and grab a listen to Sharon on YouTube https://www.youtube.com/channel/UCHWbqVlzjjZ0nq9j4jnbxpw Give her a thumbs up!

Also, find gigs on FaceBook at The Sounds and Talent of the Jersey Shore.