Reprinted with permission from The Monmouth Journal, by Muriel Smith ~

MANASQUAN – Kevin Orender knows how to help people who grieve the loss of a loved one. As a licensed funeral director, he has been doing that for four decades, both in Staten Island, where he was raised, and New Jersey, when he and his family moved here. He has worked for numerous other funeral directors, then established his own family owned business, the Orender Family Home for Funerals, in 2004. 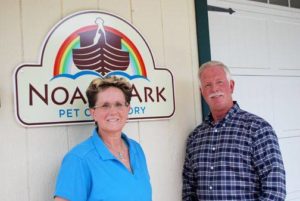 But Orender, who also happens to be deputy-mayor of Wall Township, having been elected to his first three-year term last November, knows that people sometimes grieve as much over the loss of a pet as they do over a family member.  And that grief must also be respected, honored, and cared for in a compassionate manner.

And that is why Orender opened Noah’s Ark 18 months ago. A pet crematory on Old Bridge Road in Manasquan, his facility provides personal, family service to individuals and families who grieve the loss of any pet from a llama or Vietnamese pig to a cherished cat or dog. Given his own background, it isn’t surprising that Orender, personable, outgoing, quick to smile and offer a helping hand, would design a pet crematory that meets specific individual needs and goes above and beyond in personal service to help allay the pain of losing a pet.

A product of Catholic elementary and high schools on Staten Island, Orender studied at Kean College for a year before deciding he wanted to attend the American Academy McAllister Institute for Funeral Service. He received his New York funeral directors’ license in 1981 and worked in a family owned business on Long Island.

But among hero families, the call of the men in blue is strong. So Orender, following in his father’s footsteps, joined the New York Police Department and spent the next eight years as an officer, working primarily in the narcotics division. After he married, his wife Linda, fearful of his dangers he faced at work every time he left the house, convinced him to leave the force. He didn’t go far from danger, however…he spent the next 11 years as a New York City fireman, stationed on the lower east side of Manhattan.

It was after that retirement in 1999, that the Orenders moved to New Jersey, Orender secured his directors’ license in this state, and managed a funeral home for four years before opening his own funeral home in 2004. As he has often said, “When a family calls, it’s my job to lessen the burden on them for the next several days, regardless of what it takes.  I make myself a part of every family I serve.” And that’s how Noah’s Ark came to be.

Veterinary offices offer  crematory services, Orender is quick to explain.|But, with his experience as a funeral director for families, he knew there were certain services he could offer that could make accepting the death of a pet easier to accept. He assures his customers that their pet will be cremated the day he comes to the crematory, and the cremains can be returned to the family within that same 24-hour period.  “That’s important to many people dealing with the grief process,” the director said, “it can help families to accept the loss if they can receive the cremains quickly and care for them in a way that best suits their needs.” Because we have become a transient society, Orender said many people now opt to keep a pet’s cremains in containers in their homes, rather than buried in a back yard they might be leaving in a few years.

His facility, a former four car garage with upstairs rooms, offers private space for family members to remain with their pet as long as they feel they need to before the service, or to stay with cremains until they compose themselves after they receive their pet. He also creates, and presents to his customers, a plaster paw print as a memorial along with the cremains.  The individual attention given to each animal’s disposition enables him to guarantee the 24-hour service that has proven so reassuring and comforting to customers.

That Orender’s service is unique and highly desirable can be attested to by the variety of pets whose families he has helped, and the distant locations families hail from to take advantage of the service. He has cremated pets ranging from snakes and bearded dragons to  Vietnamese pigs and a llama, with the vast majority of the pets being cats or dogs. There have been ducks, as well, he said, along with other pets who have been long time members of their families. His retort, the container in which the deceased animal lies during the cremation process, can accommodate pets as large as 400 pounds, with each pet cremated individually as soon after death as he receives the body. Orender said he has picked up deceased animals both from private homes as well as veterinary offices, though most families bring their pets to his facility. His clients have come from out-of-state or distant communities in New Jersey, primarily because of the individuality of the cremation as well as the quick presentation of the ashes. “Some families have come from quite a distance, give me their deceased pet, then go out for lunch or to spend some quiet time on the beach or along the shore, then return to pick up the cremains and continue their grieving process with the pet safely and securely returned to them in a wooden box. It helps in the grieving process.”

“Just as with a human death, one has to be respectful of what an individual or a family is going through at the time of loss of a pet. For many, that pet has been an important member of the family, and simply disposing of him after  death, or having him cremated in a communal process, is not satisfactory. Some family members like to see their pet be placed in the retort, then wait to have him returned. We like to provide whatever service that particular family needs at that very tumultuous time in their lives.”  Orender said he can also offer communal cremations, and has done so for strays or at family requests.

The cost of Noah’s Ark depends on the services desired or needed, whether staff is picking up the animal or receiving it at Noah’s Ark, and the animal’s size. Prices range from $195 to $275 for the cremation, the wooden box and the plaster paw print, with additional costs depending on individual needs.

A pet owner himself, Orender employs one assistant, Ellie Nicholas, at Noah’s Ark, and the firm responds to all calls immediately. Nicholas noted that Orender recently spent a portion of Mother’s Day picking up and taking final care for a customer, but there was nothing unusual about that. “It was simply when the service was needed; he received the call and went into action.”

That’s probably what families appreciate the most.

The Benefits Of Dogs In The Workplace