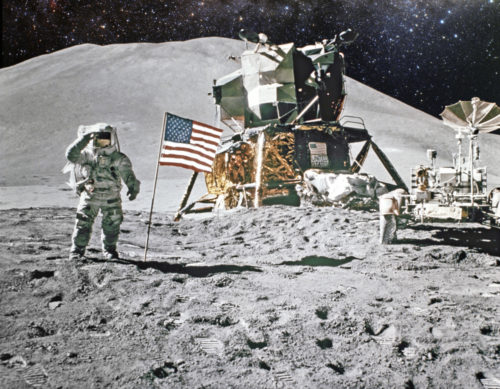 “One Small Step for a Man, One Giant Leap for Mankind.”

On July 20, 1969, the first human being landed on the surface of the Earth’s Moon. With more than half a billion people watching on television, Neil Armstrong climbed down the ladder of the Lunar Module and proclaimed: “That’s one small step for a man, one giant leap for mankind.” The event was one of the great unifying moments in history for all of humanity. We celebrate that great achievement in technology as well as marking the moment in history when Earth was represented as a whole community.

Join us on July 21 for an all-day event featuring speakers Frank O’Brien of NASA’s Solar System Ambassador program, Dr. Daniel Marlow the Evan Crawford 1911 Professor of Physics at Princeton who works with the Compact Muon Solenoid at CERN’s Large Hadron Collider, Lori Lauber, Director of ISEC speaking about Project Diana, Joseph Foster Assistant former Vice President, for data management at Merrill Lynch and contractor for the Department of Defense, and the FBI will speak about Radar. View the new “A Giant Leap” exhibit commemorating the Apollo 11 Mission featuring artifacts from July 20, 1969, and a flag that has been on the moon. A $10. Donation is suggested.