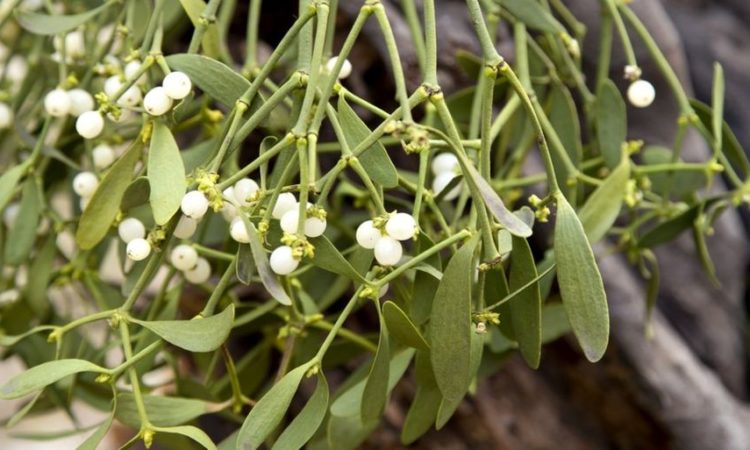 I noticed something odd last February while driving north along 95. On our return trip from La. I noticed something peculiar up among the branches of many trees. Funny, that I’d never seen or noticed these before! And I’m one who, if not driving, watch with eagle eyes for birds, animals, flora and fauna. Dad used to say, “You don’t miss a trick!  Looking like round green spheres of what appeared to be leaves….but this was winter, trees surrounding were bare, so what on earth could make these green balls? 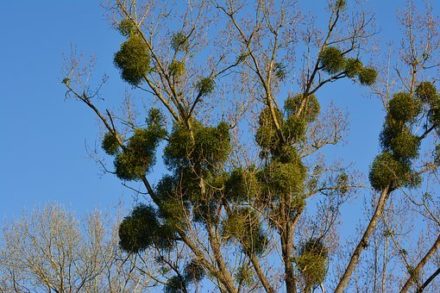 Being an avid plant lover and gardener, both indoors and out, I was curious. How did I not know the answer? But…then there’s Mr. Google! The instant answer guy at my fingertips with no card catalog or Dewey Decimal system! Ha! I have to say, I was blown away by the answers! Our “kissing plant” got its’ name from two Anglo Saxon words, Mistel meaning dung and tan meaning twig or stick. Well, dung stick or poo stick, think we’ll agree, Mistletoe isn’t from charming beginnings now is it! Ha! Mistletoe, as we now call it is actually a parasite plant! It gets its’ start via bird droppings! The seed begins to sprout on the branch & attaches its’ roots. Yes- a ‘hemiparasite’, although capable of sustaining itself as other plants do, mistletoe will send out roots into the bark of a host tree and feed on its’ water & nutrients. Unfortunately if too many infest a tree, often the host tree may die out. 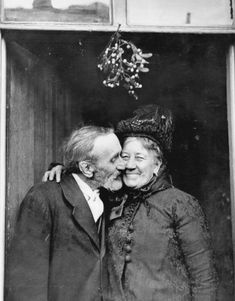 There are two types of this “kissing” plant, as it is often referred to. Our North American version which is often used during the Christmas season is called Phoradendron flavescent. Commonly seen along the stretch from NJ to Florida. The European version of Mistletoe is called Viscum Album which grows more shrub-like, sports small yellow flowers and very sticky white berries which are said to be poisonous. Commonly found on apple trees but rarely on oaks. Viscum was introduced to the US in California in 1900.

It is said that most of the rare oak mistletoe was about wiped out by the ancient Celtics and Germans who believed it had mystical powers using it in various ceremonies. European folklore called this unique plant magical and mysterious, believing it could bring fertility, protect against poison as well as acting as an aphrodisiac. Because it was rarely found in or on their sacred oaks, ancient Celtic Druids considered it sacred, cutting it with a golden sickle on the 6th night of the moon. Dressing in white robes, they would then sacrifice two white bulls while prayers were made asking for recipients of mistletoe to prosper. Later the event of cutting the mistletoe from the oak morphed into symbolizing emasculation of the old King by his successor.

This strange plant was also thought of as a sexual symbol carrying the “soul” of the oak. Ancients gathered the plant for summer and winter solstices as well as carrying the custom of decorating one’s house by Druids and other pre-Christian traditions. Thought to have mystical powers, the Greeks used Mistletoe in many folklore customs. Throughout Europe, it was hung over houses, from ceilings and over stable doors to ward off witches and evil. Some believed it could put out fires, perhaps brought on by the belief that it “came” during flashes of lightning. Immigration and settlers brought the traditions along to the new world. 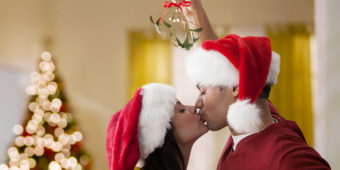 In modern-day we all associate the plant with kissing and hang sprigs in doorways. A Greek festival, Saturnalia, incorporated kissing under the sprigs part of their festival as well as part of marriage rites, as they thought it would bring fertility. Considering it a plant of peace, the Scandinavians believed mistletoe could bring enemies to a truce or make fighting couples kiss & rekindle. (Know anyone that could use a couple of shots of Mistletoe?)

Christmas traditions said that a young woman or man standing under mistletoe couldn’t refuse a kiss! (sexual harassment hadn’t quite kicked in yet) A kiss received under “the toe” might mean a heavy romance, lasting friendship and goodwill. But to refuse a kiss would bring bad luck. In parts of England, the mistletoe was burned on the 12th night- if not, they believed boys and girls who had kissed under it would never marry. So many rich and interesting legends surrounding our dear beloved mistletoe! One that caught my eye reminded me of reading The Hobbit for the first time 40 some years ago?

In this piece of folklore, Mistletoe was the sacred plant of the Goddess Frigg, goddess of love, who was the mother of Baldur, the god of summer sun. Baldur told of a nightmare and that he himself had died, which, if he passed, all life would end. The story says that Frigg went swiftly to air, fire, water, earth, all animals and plants asking each to protect and keep harm away from her son. Knowing that now nothing on or below the earth could put Baldur in danger. Here enters the god of evil, Loki, who knew of the only plant that Frigg missed….Mistletoe…growing in an apple tree. Loki made an arrow using mistletoe for the tip. It is said that he gave this arrow to the god of winter, Hoder…who was blind. Hoder shot the arrow nailing Baldur in the head. With Baldur dead, the sky went dark and every living thing cried for the sun god. All the living things tried to bring life back to Baldur for three days with no luck. At last, Frigg, crying over her lifeless son found him alive once more! Legend has it that the tears of Frigg turned into the creamy white berries of the Mistletoe plant. Frigg shared her happiness with a kiss to all who passed under the apple tree-host to the Mistletoe and a new precedent was set. Anyone standing under the mistletoe would be met with no harm, just a token of love, peace….a kiss.

Love conquers death, good over evil. Mistletoe’s real or not so real medicinal purposes and the promise of love & friendship keeps the fun and mystery in a somewhat quirky tradition…that began as a bird dropping!