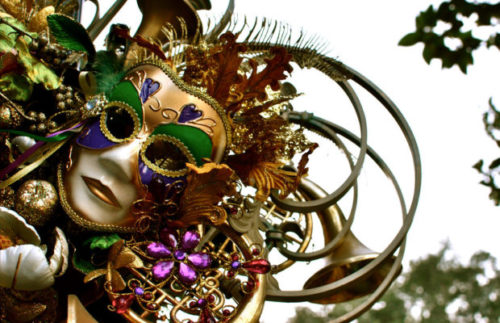 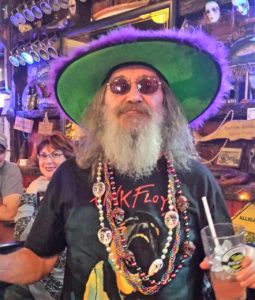 Mardi Gras AKA Carnival time has arrived! This holiday originated in La. and runs for a week, ending on “Fat Tuesday”, the day before Lent. The French definition of of Mardi Gras is Fat Tuesday. All across the country, there are celebrations and festivals at restaurants, bars & private homes. Most think of Mardi Gras as a New Orleans thing, but actually, there are celebrations and parades in many towns throughout “Loosiana” in streets and along various waterways where locals dress up not only themselves but “gussy” up their assorted boats and do up a floating Mardi Gras parade with music and beads tossed to the many dockside folks celebrating with family & friends.
It is reported by historians that Mardi Gras on American soil began all the way back on March 3rd, 1699!

Two French explorers, Iberville and Bienville came to land just South of where New Orleans is now. After celebrating they supposedly decided to call the place, Point du Mardi Gras, honoring the holiday which Parisians have celebrated dating back to the Middle Ages. In ancient Rome and Greece, early Christians with Pagan ancestry would celebrate, feasting before the days of Lent began. The Mardi Gras season really begins on what is called Epiphany, celebrated by Christians on January 6th also referred to as Three Kings Day AKA the 12th Day of Christmas.

Always believing that Mardi Gras began in New Orleans, I was blown away by learning that the first “American” recorded celebration was in fact held in Mobile, Alabama!? Odd to read after the info recorded regarding March 3rd, 1699 above? I guess Iberville and Bienville hadn’t put their stamp on the event they held just 60 miles South of N’Awlins? So, we find that Mobile held the first “organized” documented celebration in 1703. Years later in 1857 members of the Cowbellian de Rakin Society made their way to New Orleans to help with the start of the Krewe of Comus, a most high ranking New Orleans Mardi Gras society. This, according to Mobile’s Chamber of Commerce although the first actual parade was held in 1837. The first parade with actual floats wasn’t until 1857 with the help of Mobile’s Chamber. 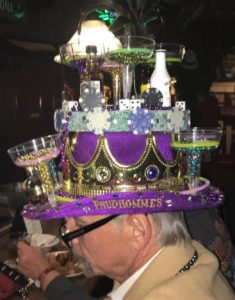 Upon researching this popular and exciting celebration it is found that Mardi Gras is related to “Shrovetide”, the celebration prior to the fasting and religious season of Lent. In other countries, Fat Tuesday is also known as “Shrove Tuesday” coming from the term “shrive” or confess. The party time ends at midnight as Ash Wednesday arrives followed by 40 days of Lent. There are historians who claim the Mardi Gras celebrations began as a result of Catholic Church’s way of discouraging sex and meat for the 40 days. Reformers are said to have assisted in rumors regarding the pagan influence hoping to squash pre-Lenten hedonism. Such conflicting stories!

I’ve read that in 1872, the Rex Parade is when official colors were chosen- Purple for Justice, Green for Faith and Gold for Power. Businessmen in 1872 decided to “create” a King of Carnival called Rex. Back then, before beaded necklaces, sugared almonds were thrown out to those along the parade way. Before long toys, doubloons, cups, Frisbees and little figurines, etc. were thrown out to people to catch. Side note here- beads are thrown to everyone along the parade route. Many non-La. visitors, college kids and inebriated individuals began the inappropriate idea of baring one’s breasts in order to have beads thrown! Something many don’t realize that much of this was begun by pickpocket teams! Pickpockets would cruise up and down through the drunk crowds while their female counterparts would grab the attention up on the many balconies by lifting their shirts. Down below it was easy pickins’ as the street partyers would get all goo-goo-eyed not aware of their losses! Oh my!

With Lent comes the idea of clearing out and using up sweets, sugar, lard, butter, eggs and any rich foods before Ash Wednesday the beginning of Lent. Have you ever seen or had a King Cake? Colorful beauties which derived from using up the pantry stock said to come from the Greek word Epiphany or “to show”. Religious tradition says Jesus first showed himself to the world and three wise men, so on this Holy Day a dried kidney bean was placed inside the King Cakes. Looks like France takes the credit of bringing this tradition to us in 1870. The early cakes contained a dried kidney bean, but with the invention of plastic, they were replaced by little plastic babies (available at craft stores in the baby shower area) hidden inside representing Jesus.

It is now said that at a celebration, whoever finds the baby in their piece will receive good luck and health in the New Year AND they are to furnish a king cake at the next year festivity. My husband, David and I took orders for many years producing beautiful colorful King Cakes with baby and a set of beads over top. Our last year in Pa. at our restaurant we cranked out 38 cakes!

In Lancaster County, Pa. it is the same idea of clearing out the pantry and using up the lard before Ash Wednesday dating back with early Pennsylvania Dutch and Germans settled in the area. Rather than a cake, a sort of donut without a hole is baked. These are called a Fastnacht which means the “night before the fast”. The spelling varies fastnacht, fassenacht, fasnacht, faschnacht. In any case, the early King Cakes and Fastnachts were not really that great, more like hunks of bread dough.

In modern times there are all sorts of versions from powdered sugar coatings, cream-filled or jelly-filled which certainly jazzes up the appearances and tastes! Living in Lancaster County for 30 years I was amazed at the “gazillions” of these little fried doughs which you’ll find at just about every workplace, church, grocery store, etc. It is thought good luck will prevail if one is consumed.