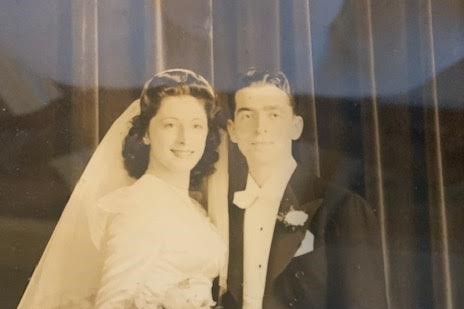 Longtime residents Jean and John Lodato of Sunnyside Manor in Wall Township are celebrating their 75th Wedding Anniversary. The loving couple met while John worked for the Naval Civil Service while Jean was a typist at an office on base. One day John came into the office where Jean worked and asked her to type something for him. A week later he returned and handed her a note, asking Jean to go out with him. She said yes and the rest is history.
Upon marrying in 1945, they moved to Newark then Clifton where they resided for 62 years. They have two daughters Debbie and Karen, four grandchildren, six great-grandsons, and one great-granddaughter. 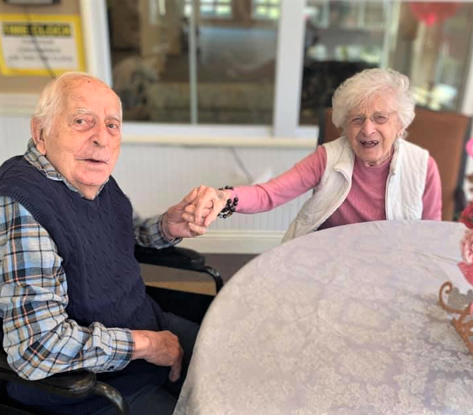 After traveling the world and living a very good life together, they decided to tour the state of the art community, Sunnyside Manor, after seeing an advertisement in the paper. They decided to move into the community in 2015 and have been extremely happy ever since.
In honor of their 75th Wedding Anniversary, the staff at Sunnyside Manor threw a beautiful party to renew Jean and John’s marriage vows with music and dancing. Jean shared her advice for longevity and a successful marriage, she said, “Compromise every day, never go to bed angry or upset with your spouse and to always fight fair and
lovingly when you’re able to do so.”
Jean also shared that throughout her marriage, they traveled often and enjoyed going to dances and playing cards with their married friends and she believes that young married couples today could benefit and have a happy life by making memories.

ABOUT SUNNYSIDE MANOR:
Sunnyside Manor, which has been owned and managed by the Keane family for over 25 years, expanded and relocated to Wall, NJ in 2015. Sunnyside has been providing care in the area for over 100 years. The new Sunnyside Manor provides a continuum of care in three distinct neighborhoods: Independence ‘Plus’ Assisted Living, Recollections Memory Care and Skilled Nursing.