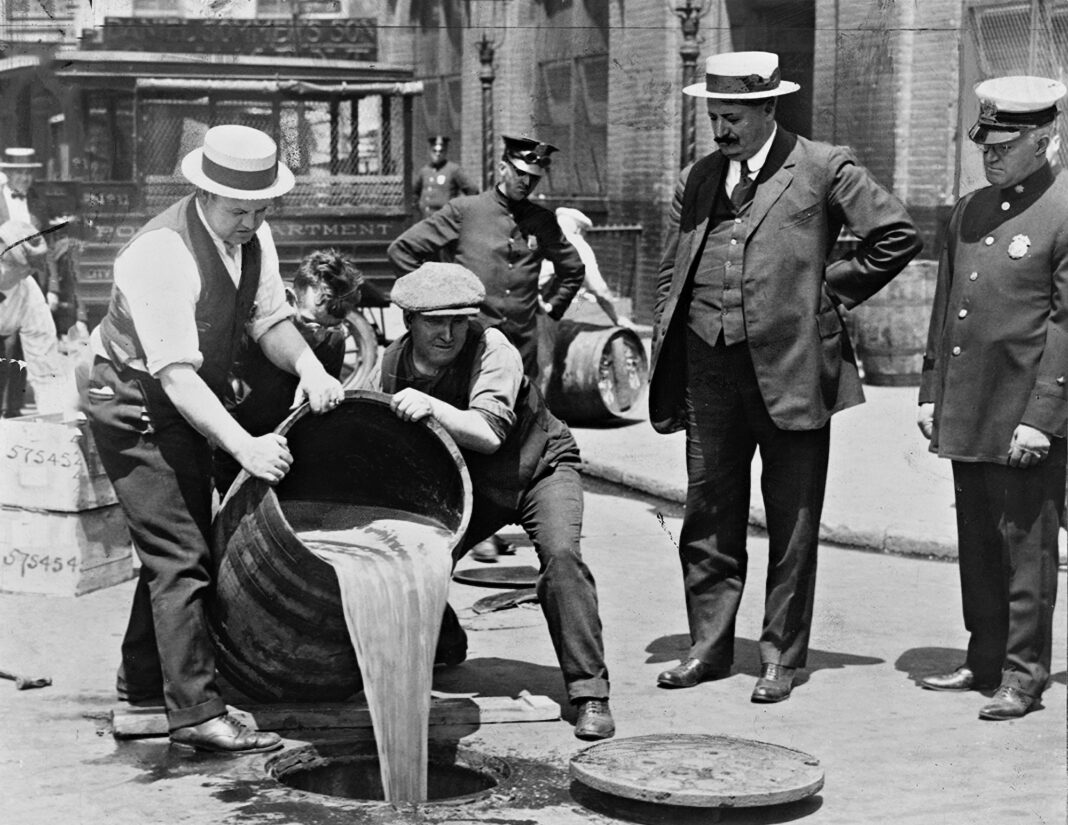 And the money kept rolling in… By 1929, Al Lillien’s bootlegging protection empire stretched from the Saint Lawrence Seaway all the way to Virginia.  His organization made $2.00 per case imported into the United States.

Oscar Hammerstein would have never dreamed of the modifications that Lillien had made to the property.   Cars and trucks rolled into the garage at all hours of the night.  The cars would pull into the far-left corner of the structure where the elevator, the platform of which was not distinguishable from the floor of the building, would lower the vehicle to the vault below.  There, white-coated technicians would empty the cars’ illicit cargo into large glass drums that held exactly 50 gallons of whiskey.  Then the lot would be filtered, bottled, corked, and placed in cardboard boxes.

On top of the house, was the antenna for the most powerful radio on the east coast.   On a prominent gable on the third floor was a bright blue light.  It could be seen easily from 12 miles out to sea.   When the coast was clear, the fast boats came in to offload their cargo at Wagner’s Beach in Atlantic Highlands, next to an oil storage facility.

Lillien’s direction had changed as well.  Not only was he ensuring safe passage for several bootlegging crews, like Waxy Gordon’s boys, but he had begun building breweries throughout New Jersey and Pennsylvania.  Beer was hard to source for the syndicate, so he would become a provider. Besides, he philosophized, Prohibition would not last forever.  Breweries could be legitimized as soon as the Volstead Act was repealed.

The operation had grown to an unwieldy size.  There were multiple wireless radio set-ups across coastal states, an operation on Broadway in New York City, speed boats, freighters and guns.  Lots of guns.

Money changes everything, but nothing lasts forever.

It was 4:30 PM on October 16, 1929.  Agents of the Federal Government coordinated 35 simultaneous raids against Alexander Lillien’s Syndicate, from Atlantic City, New Jersey to Sag Harbor, New York.  The “Feds” had been tipped off by the Syndicates own radio transmissions.  It took them 6 months to put this operation together.  130 Agents participated, along with State Police units.  The local and county police were kept in the dark.  They were suspected of being on the Syndicate’s payroll.  The Feds could not allow the bootleggers to be tipped off.

At the main Radio Center, the wireless operator was in the middle of transmitting to a large Syndicate vessel, loaded with liquor, when he was quickly arrested.  A federal agent, who had studied and learned Al Lillien’s radio codes, jumped on the key and transmitted instructions to the vessel, leading it to an encounter with a Coast Guard Cutter.

At the Hammerstein Mansion, overlooking Atlantic Highlands, a large contingent of armed agents climbed the hill and attacked Lillien’s veritable fortress.  Agents would later report that they discovered gun emplacements, a large armory of military weapons, powerful telescopes mounted in a cupola observation tower, and underground storage vaults and tunnels.

That night, according to the NY Times (TimesMachine: October 17, 1929 – NYTimes.com), 200 miles of the Syndicate’s operation fell into Federal hands, including landing areas, warehouses, offices, and salerooms.  The Feds said that the Radio Center was housed in a bungalow on the property, away from the main house, and that a large cave was dug in the side of the hill for liquor storage but did not specify the quantity seized.  34 were indicted by a grand jury after the raids.

Among those indicted were:

When these men got their day in court, most were acquitted, including the Lillien Brothers. While the story of the raid, like the Lillien murder, was carried across the country, one aspect of the story left out of the newspapers was that of a lone gangster, on the steps of the Mansion.  As the Federal Agents approached and identified themselves, he attempted to defend himself, the booze, the house, etc. and opened fire on the law.  His demise was an ugly one and history has forgotten his identity.

The story did not end after the raid and subsequent acquittal.  The Lillien’s had other radio setups that the Feds knew nothing about.  They waited a while and then went back to work.

Times were changing.  There was more violence, more double-crosses.  You needed a scorecard to figure out who was in league with whom.  Law enforcement attempted to avoid prohibition violations or, in some cases were in tight with the bootleggers themselves.

In 1931, Jonas Tumen of Asbury Park became Monmouth County Prosecutor.  One of his first acts was to install his friend, Harry B. Crook as Chief of Monmouth County Detectives.

During their tenure in office, the two men built a criminal empire of their own, extorting money from speakeasy owners for “protection”, endorsing gun permits for gangsters,  and Crook would provide muscle for gangsters as well, once threatening to “Rub out” Richard DeWitt, publisher of the Long Branch Daily Record.  He was trusted by the mob.

In 1934, both Tumen and Crook were on the hook for their misdeeds while in office.  Harry B. Crook, Chief of Monmouth County Detectives was looking at fifty-two charges against him.   A former investigator, Thomas Andley, testified that he watched Crooks brother, Fred, destroy seized slot machines in the cellar of Crooks home in Asbury Park.  Another witness testified that Crook failed to investigate three murders in Monmouth County: Frank (Chee Chee) Santinelli, James (Buff) Marson, and Frank McGill.  McGill’s charred body was discovered in a burning automobile.

According to Eatontown Police Chief Kirkgard, Harry Crook, after seeing the body of McGill aflame, said the case looked like a suicide.   Additional testimony spoke to Crook allowing his son to operate a speakeasy in Asbury Park.  In the end, Crook would be ousted from office on only six of the fifty-two charges, but that was sufficient to keep him out of public service for the rest of his life.

Tumen’s charges were myriad.  Under examination by prosecutors, Tuman was asked about cases that he never brought to trial despite Grand Jury indictments.  He claimed that he never heard of the cases.  One of these cases was a charge against Alexander Lillien on carrying a .38 caliber pistol.  It never made it to court.

Lucky Charlie Luciano, rose like a shooting star in the Organization.

In 1931, Lucky Charlie invited the Boss of Bosses, Joseph Masseria to lunch at Nouva Villa Tammaro on Coney Island.

After a splendid meal, Luciano went to the men’s room.  A moment later, Vito Genovese, Bugsy Siegel, Joe Adonis, and Albert Anastasia burst through the front door of the restaurant guns blazing.

Six bullets smashed into Masseria killing him and leaving him face down on the table.  Before leaving the killers left an Ace of Spades next to his body.  Later, Luciano had Salvatore Maranzano executed, as well.  Now nobody would stand in his way.  He formed “The Commission.” Over the next two years, the Commission consolidated its power and became stronger and stronger.

In 1932, the bootleggers, realizing that the Volstead Act was on its last legs, were going legitimate.  The Lillien Brother’s and Waxey Gordon’s gang had filed for permits to brew beer and distill alcohol as soon as Prohibition was repealed.  They figured that would prevent them from losing income.

At a meeting in Atlantic City,  Lucky Charlie and the Commission informed all of the Bootleggers that, as Prohibition would likely be repealed in the very near future, the commission would expect a percentage of their profits, or the newly legit Brewers and Distillers would face bombings, hijackings, and arson.  The majority of the, soon to be former, bootleggers acquiesced.   However, Waxey Gordon and his crew, and presumably the Lillien crew told Lucky Charlie and the Commission to “twenty-three Skidoo.”

On March 23, 1933, Alexander Lillien was murdered in his home, a King of Spades left near his body.  Just like Masseria, who had that Ace of spades next to his murdered corpse.

A few weeks after Lillien’s murder, Waxey Gordon, Max Hassel and Max Greenberg were in the room they rented in Elizabeth, NJ at the Essex Hotel.  The room was the office where they presided over their bootlegging empire.  With them were several other men.  It was a hit.  The only member of the gang to survive was Waxey Gordon.  All roads pointed to Lucky Luciano.

It is doubtful that Luciano, Lansky, Genovese or Siegel executed Lillien.  To do so would make Al Lillien seem too important.  Luciano needed low-level muscle, but one that would be trusted by Lillien and allowed into the fortress that was the mansion.   As all the players are deceased and time obscures most of the evidence, all that is left is circumstantial evidence gathered from contemporary publications.

Here is what may have happened:

Lillien shoots down Luciano’s attempt at a protection dodge, as does Gordon.  Luciano hires local muscle to hit Lillien.  Lillien had to go first as he was smart and well respected in the circle of rum.  Waxey Gordon typically followed his lead.

Al Lillien is at home, his “Driver” and “Grounds Keeper” are on an errand that he dreamed up to get them out of the house.  The phone rings and Harry Crook tells Lillien that he has the permits and other things that Lillien will need to move to a legitimate business model ahead of the competition.  Lillien tells Crook that he will leave the gate to the estate open.  Crook comes to the house and kills Lillien, leaving the King of Spades near the body.  He leaves quickly, returning to his home in Asbury Park and waits.

Later that night he gets a call from the local police informing him of Lillien’s murder.  At that moment, the assassin takes over the investigation into the murder that he, himself, committed.   No one was ever charged with Alexander Lillien’s Murder.

The case is still open.

Share
Facebook
Twitter
Email
Print
Previous articleCold Weather Getting You Down? Warm Up With Delicious Soups From Fresh Kitchen!
Next articleA Prime Deal At Waterman’s Tavern

The Sun Is Shining At The Jersey Shore!