King Dollar is Back 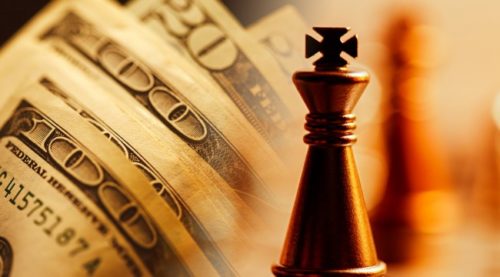 The US dollar’s exchange is important to investors.  Many diversified portfolios have international exposure.  Exchange rates tend to be more volatile than bonds and less volatile than stocks.  Academic work finds that as a result, the changes in dollar’s exchange rate could account for as much as two-thirds of the return of a global bond fund and a third of the return of a global equity fund.

A year ago, the Dutch and French elections signaled that UK referendum to leave the EU and the US election of Trump did not usher in a populist-nationalist epoch, such as the one that proceeded the last great financial crisis.  The euro gapped higher and did not look back.

Macron’s victory, in particular, sparked a correction to the euro’s decline that began in mid-2014.  Using technical tools, we had identified several different retracement targets.  Contrary to our expectations, the euro pushed through a number of these targets.  However, the last corrective one, where a decade-old monthly trend line and a 61.8% retracement of the euro’s decline converged (~$1.26), was approached and held.

As the dollar fell, two main narratives were offered to explain and also to justify an extension of the move.  The first was that a new convergence had superseded the divergence theme.   Europe and Japan were exiting the extraordinary policies.  We were skeptical and did not anticipate peak divergence until at least the middle of 2019 (on policy rates) and even longer in terms of the trajectory of the central bank’s balance sheet.

Second, was the twin deficit problem.  The larger trade and budget deficits needed to be financed. The Federal Reserve is not fully reinvesting the proceeds of maturing issues ($450 bln less in 2018 and $600 bln less in 2019), and that buying needs to be replaced.  Higher interest rates and a weaker dollar were offered as TINA (There Is No Alternative), even though the first half of the 1980s demonstrated that the twin deficits need not prevent dollar appreciation.

The widening of the interest rate differentials in the dollar’s favor makes is costly to be short the dollar or to use it as a funding currency unless greenback is falling.  The forward points make it expensive to hold a short dollar position against many currencies, even if it is going sideways.  Since the start of the month, the weakest currencies have been the Swedish krona (-3.6%), the Swiss franc (-3.4%) and the Japanese yen (-2.5%).   Indicative prices suggest one may be paid nearly 300 bp to hedge euro exposure into dollars for a year and more than 250 bp to hedge yen exposure into dollars.

The rising US interest rates may also eclipse the appeal of the traditional high yielders.  The New Zealand dollar, for example, where the cash rate is 1.75%, the same as the rate the Fed pays on reserves (both required and excess), has fallen 2.2% against the dollar.  The Canadian dollar and Australian dollar, which are also backed by relatively high interest rates (1.5% and 1.25% overnight rates respectively), have been among the best performers in April.  The Canadian dollar is the only major currency to gain against the dollar.  It is up a little more than 0.5%.  The Australian dollar’s 1.3% decline is the least among the major currencies.