Have you ever wondered why Spring Lake acquired the moniker of the, “Irish Riviera.” Asking local residents this question drew some perplexed looks as to what was the key influence that lured the Irish to Spring Lake and how true was it.

After all, the early founders and investors do not suggest any of Irish beginnings. In the early 1870’s, Philadelphia Presbyterian minister, Rev. Alphonso A. Willits visited the Osborn farm which included “Fresh Pond,” today, known as Spring Lake because of the many springs that feed it. The Jersey shore in general, had become a retreat from the industrialization of city life in Philadelphia and New York. Willits, an ardent surf fisherman was inspired by the smooth white stretch of beach and proximity to the fresh lake to realize the possibility of developing the area as an exclusive resort for Philadelphians. He returned to Philadelphia and with several investors organized the Spring Lake Beach Improvement Company, purchasing the Osborn farm and drawing up the plan for Spring Lake Beach. 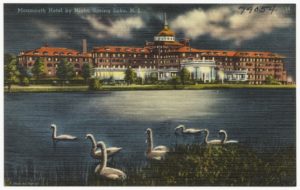 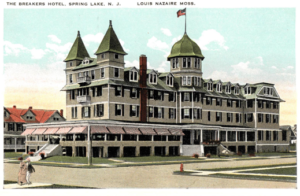 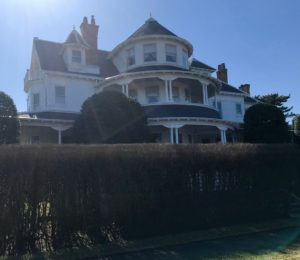 Faith and family were very important to Maloney and in 1892, this very social Philadelphian, purchased a summer cottage at First and Morris Avenues in Spring Lake that still remains, today. A devout Catholic, he was a member of the Saint Ann mission church on Monmouth and Fifth Avenues a very small wood framed church founded in 1884. Incorporated as a parish in 1897, Maloney was elected one of its trustees and guaranteed the support of a full-time priest. 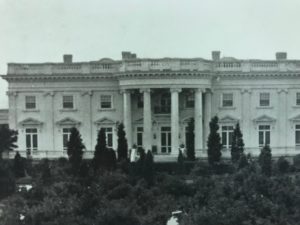 Maloney loved Spring Lake, and would eventually become a full-time resident. In 1898 he began building what would be Spring Lake’s most magnificent mansion, Ballingarry, named for his ancestral Irish home. It took up a whole block between First and Second Avenues and Morris and Jersey Avenues. Its architectural design earned it the nickname “the White House By the Sea,” but sadly it was demolished in 1955. 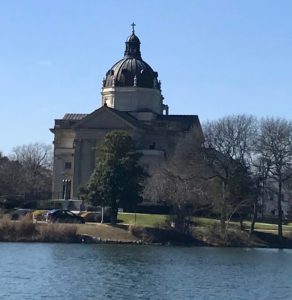 The church was named in memory of his daughter, Catharine, who died of a prolonged illness May 20,1900, only 17 years old. In grief but with great devotion to his faith, Maloney donated the land and money and exerted his care to the building of Saint Catharine Church. The cornerstone was laid on St. Patrick’s Day in 1901 and it took six years to build.

It is a beautiful copper domed classical revival style gem overlooking the Spring Lake on West Lake Drive.  Maloney desired that churches of the Renaissance inspire the exterior design and interior ornamentation of Saint Catharine. Philadelphia architect Horace Trumbauer designed the church and its building was highly publicized in Philadelphia. Artists from Italy were commissioned for statuary, carved stonework and paintings. Stained glass came from Munich, Germany. 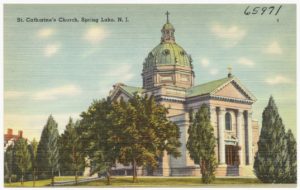 In this project as in other things, Maloney gave reverence to his Irish roots. Inside, among the beautiful paintings and frescos of biblical scenes, “the series known as the Ireland Series, “honors the faith and civilization of ancient, medieval, and modern Ireland,” notes Colrick’s book of the Centennial History of Saint Catharine Church. The two panels and one lunette depict various religious themes, people and symbols of Ireland through the ages.  Also, the lunette signifying the Sacrament of Baptism depicts Saint Patrick baptizing King Aengus, the Irish king that converted to Catholicism. It was a welcoming church then and now to Irish Catholics. 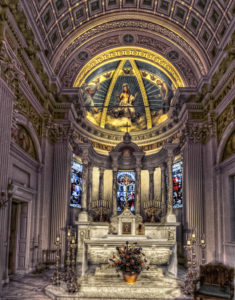 Indeed, Spring Lake had become a resort town with, to coin a phrase, “it’s Irish showing.” Dorothy Lau, an Irish-American resident, with a long time interest in the history of Spring Lake, believes it was “the hotels in the 1920’s that first coined it as the “Irish Riviera” to promote it to wealthy Irish clients and it stuck.” According to A Spring Lake History by Robert White, Spring Lake determined early on that it would have a boardwalk without “fanfare amusements” and appeal as a more family resort. 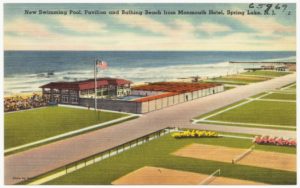 Hotels like The Warren provided hayrides for its young guests. Patricia Leonard Giblin, Irish to her red hair, remembers growing up in Spring Lake in the 50’s & 60’s.   “There were children’s dances at the Monmouth Hotel where girls were required to wear white gloves. Third Avenue was sort of the dividing line. East of it were the hotels and large mostly summer homes and west were the smaller and more affordable homes of full-time residents.” 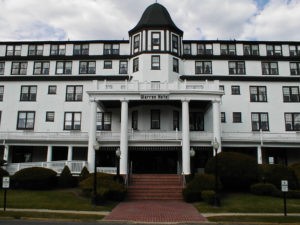 The Monmouth Hotel like most of the grand resorts are gone now, but the Irish still revere Spring Lake! In the 2000 census, when asked about ancestry, 39.4% of the borough listed theirs as Irish. That is the most of any municipality in the United States. I must mention that nearby Avon-By-The-Sea was 4th on that list. In a 2002, a survey quoted in a New York Times article, said 50.7% of Spring Lake claimed Irish heritage. I can only assume the summer residents were included then. So, come this summer as you stroll down the boardwalk and tuck your toes into the sand of Spring Lake Beach, know you are on the Irish Riviera.

The Spring Lake Historical Society, 423 Warren Avenue, is a wonderful museum that is like a stroll through the gilded periods of Spring Lake and the exhibits explain the people and measures that made it so charming and so Irish.