How Sweet it Is! 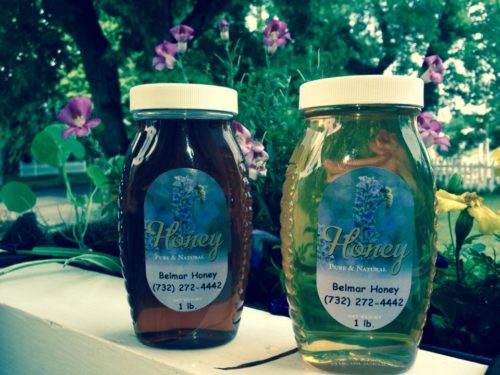 My dad always said, “You learn something new every day”, and boy did I! And right in a local backyard of Belmar. After hearing about a local Chef keeping bees in Belmar I decided to check it out. Ed Lippencott, a lifelong Fourth Avenue Belmar resident, is known to many as Chef Ed. Experienced in the culinary field, Ed ran his own restaurant along Ocean Ave., Belmar. Bees are his sideline hobby, Chef by trade (he’s available folks). Although Ed has no other known beekeepers in the family, he mentions his dad grew up in Neptune on Locust Grove Farm near Jumping Brook Golf Course-now a housing development. As a child Ed says he wasn’t into honey or bees, but has always been fascinated with nature and is an avid birder. 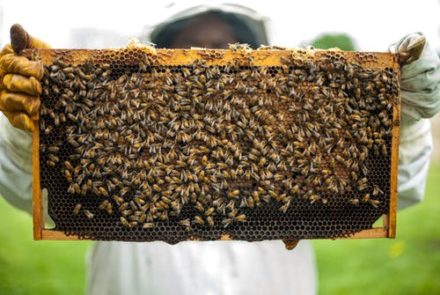 Ed mainly uses his honey in drinking tea and in his baking. I was surprised to hear he uses it in place of Neosporin too! Great for cuts and scrapes, honey has antibacterial and anti-viral properties. Most of Ed’s customers use his honey in the kitchen, but he reports several have been using the honey to treat seasonal allergies, swearing that it works! (Ed’s got no allergies so has no personal words here) Truly an amazing all natural food! He says he is currently working on recipes for products such as lip balm, hand creams, sunscreen, CBD infused honey and flavored honeys.  The hobby of Ed’s bee keeping sprang out of his interest in organic gardening in the 90’s. I noticed while visiting he’s beginning to work with his composting, rich in egg shells and various organic kitchen waste sure to yield a bumper crop this summer. The honey bees Ed keeps produce seasonal varieties. The spring honey is usually very light in color with a mild flavor. The fall honey, darker in color, has a more pronounced flavor. It is commonly goldenrod, very dark with a strong “stout beer” like flavor. The darker honey is said to be better for baking, a favorite with many of Ed’s customers although he says the most popular is the lighter.

The weather plays a major role in the differences between honeys. Ed says honey is somewhat like wine as it varies from year to year. He mentions that many people are amazed at the difference between home-grown local honeys compared to store-bought. Honey purchased at the grocery stores are blended and highly processed. Store bought honey is made not to crystalize while sitting on the shelf. Honey in its’ natural state will begin to crystalize around pollen grains which many find unappetizing and grainy.  Of course it can be easily liquefied by bathing the jar in hot water. I personally “nuke” it briefly in the micro-wave to bring it back to a smooth state. Stores want a stable product that can sit on a shelf without crystalizing so the honey is first heated and forced through an ultra fine screen to remove any pollen grains present. This is why grocery store honey can’t help with seasonal allergies. In addition, store-bought honey could be blended from anywhere in the world. Anywhere but China. It is illegal to import honey from India and Chinese honey, although according to Google, is coming into the US despite contaminants. The honey bees we caught as kids in jars, those we see in gardens and clover patches are actually an Italian Honey Bee called, Apis Mellifera. Of course there are many of sub genera as well. 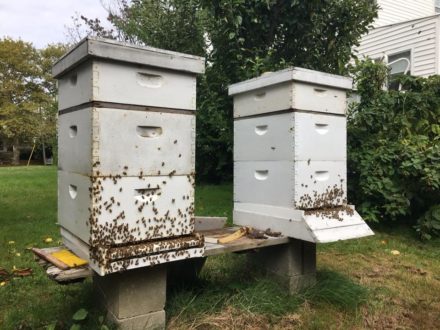 The busy life of a buzzing bee is short-lived. The bees wintering over in their hive can live 4-5 months. When visiting Ed’s hives, I noticed hundreds of dead bees on the ground at each hive’s base. Ed explained that bees do not defecate in the hive. They “step” out to do their business but die in the cold. The Queen can remain inside, the workers clean up after her. Bees average about six weeks in summer. Thinking the number of dead bees would lower their population, Ed says a Queen can lay up to 1500 eggs per day, so once a hive is established, the numbers grow fast! When a hive becomes over populated, bees can be placed with a new Queen into another hive. Ed “re-queens” his hives annually.

There’s been many reports of declining bee populations in the US. Ed says he’s saw a decline when he first began but explains that by closely monitoring his bees and making sure they remain healthy throughout the warmer months can ensure they survive the winter. Ed had lost three out of four hives several years ago. Excessive heat affects plants which effects the bees and hives, but Ed says it’s easier to protect them from extreme cold. Although skunks are a natural predator, he hasn’t had a problem with them in Belmar. Each hive can produce 100 lbs. of honey in just one summer! Fortunately we don’t have Yogi Bear living in Belmar!

Ed’s backyard has a bee and hummingbird garden but says it’s mostly for the birds. A fountain and bird bath grace the rear yard garden, but bees actually prefer puddles where ever they can find them.  Local feed for the bees are the numerous flowering trees in Spring and Summer, clover from lawns, and goldenrod in the fall as well as invasive Japanese Knotweed, all of which make great honey. 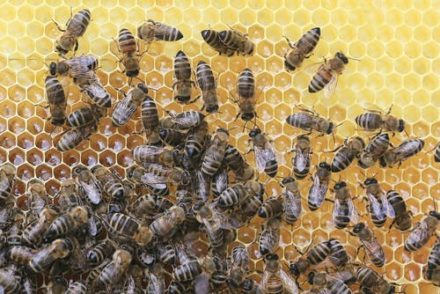 When the honey comb is capped (visible between box sections), it’s time to harvest. How often depends upon the weather and strength of the hive. The most honey in one year had been 300 pounds!  Ed says hives are “re-queened” yearly with a population constantly turning over so technically it’s a new hive. The bees are most active at about mid-day. Ed uses a fogger or smoker and veil during very active times. Always using the smoker when opening the hives as it calms the bees down and masks his odor. Ed says he doesn’t get stung much since he wears the veil but occasionally he will although he says it doesn’t bother him as it used to and plans to add a few more hives this year.

Bees still fascinate Ed which is keeping his hobby alive and fun. He enjoys working with the bees as he considers them amazing little creatures. He advises to check local ordinances and do your homework if planning on giving bee -keeping a whirl. Ed stresses that beekeeping is a lot of work to keep the hives and bees thriving. One must be diligent if keeping bee hives around neighbors. I was amazed that by planting higher shrubs to the South side of the hives the bees are forced to fly out and above the plantings which assured the flight would be above and beyond next door neighbors. It actually directs the little buggers! I asked if there was a “Beekeeping 101” being available and was interested to find that Rutgers offers an intro beekeeping course each spring.

The idea of backyard bee keeping has become more popular in recent years. Although Ed’s hives are his originals, the bees are all new generations. He says mail order catalogs, supplies and bees are readily available from professionals beekeepers here in NJ but most bees are raised down South in warmer climates and shipped up North.

When checking Amazon, I was surprised! Boy they’ve got just about anything you could possibly need…including beekeeping garb such as veils, hoods from The Humble Bee, Beekeeping For Dummies, Beekeeping for fun & Profit and more. So IF you’re interested in creating your own backyard honey production, the help is out there!