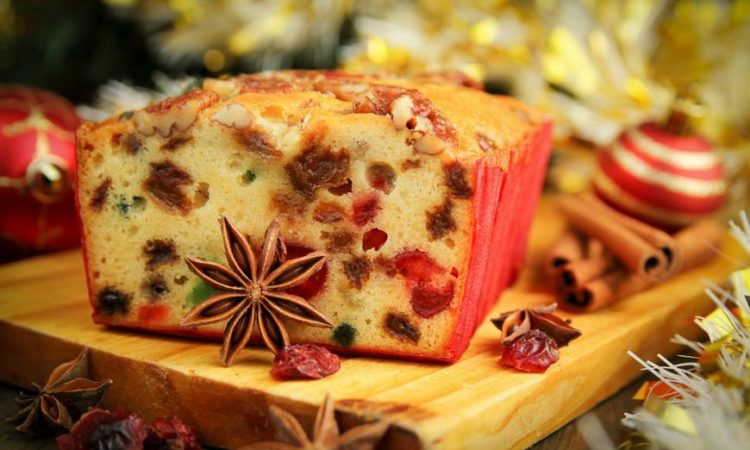 It’s Fruitcake time bringing joy to the season! These “heavy” hitters have long been a family joke as to what to do with the cake given to you by a well-meaning relative or dear old neighbor. Toss it or …..re-gift…hmmmm. 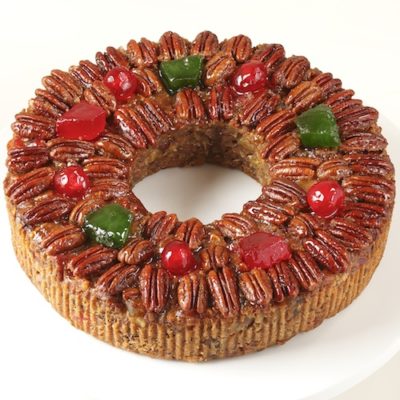 Fruitcake actually has quite an interesting history. It’s been said that these frowned upon bricks can be traced back to Roman times. Supposedly the Romans used a mix of pomegranate seeds, pine nuts, barley mash, raisins and a sort of “honeyed” wine which was shaped into cakes. They were called “satire”, the result of various sweet and sour ingredients.

According to the Village Voice, it may well have derived from the preserving of fresh fruit by a method of heavily coating it with sugar as early as the 1500s and 1600s. By the 1900s, these heavy as cinder block cakes consisted of pineapple, plums, citrus peel, cherries, dates, and pears often with a topping of walnuts or pecans.

Victorian British Royalty used as wedding cakes, as was the case with Princess Diana and Charles. Said to last forever, a slice of their wedding fruitcake sold at auction in Beverly Hills for $7500. Several years before a 27-year-old piece sod for $6000! According to The Christian Monitor, as long as the cake is stored in an airtight container, it is still AOK after 25 years!

In 1983, the NY Times published, “Fruitcake is Forever.”It tells of a fruitcake baked in 1794 at Christmas for George Washington and is STILL in existence today! It is written that George supposedly sent back the cake with a note respectfully reading, that it was not proper to accept a gift weighing more than 80 pounds…..even though the cake was just 8 inches in diameter! Each year a teeny piece of this cake is sliced off and eaten. Yikes

Did you know that a fruitcake found a seat on Apollo 11? Yep! It traveled with Neil Armstrong and Buzz Aldrin to the moon although not eaten on their moonwalk trip. This famous fruitcake returned from space and is on glorious display in the Smithsonian Air & Space Museum in D.C.!
Many of us Boomers remember the classic Johnny Carson’s mention of this amazing confectionery wonder. In December of ’85, Carson made light saying: “The worst Christmas gift is a fruitcake. There’s only one in the world and people keep sending it to each other!”

95-year-old Marie Rudisil contacted Jay after she heard him mock the fruited weights. Marie then contacted Jay insisting he should try hers. Leno got a kick out of the feisty gal and in 2000 she was hired! Marie became the “Fruitcake lady/Advice giver.”

Marie compiled a cookbook/memoir called Fruitcake: Memories of Truman and Sook. Marie was “Aunt Tiny” to Capote as he grew up in Monroeville, Ala. Truman’s cousin, Sook Falk, was a fruitcake baker. Marie also cranked out a 2006 book,  Ask the Fruitcake Lady: Everything You Would Already Know If You Had Any Sense.       https://en.wikipedia.org/wiki/Marie_Rudisill

In 1996, Manitou Colorado began an annual “Fruitcake Toss Day” held on Jan 3rd. Both hand throwing and catapulting the downtrodden cakes for distance earned trophies for the furthest mark. Sadly this holiday tradition was short-lived after a few years, although there’s been talk of starting it back up!

Harpers’ Index reports the ratio of fruitcakes to the density of mahogany is 1:1! Harpers also states that a 106-year-old piece of wedding fruitcake is on display here in Caldwell NJ at the Grover Cleveland Birthplace. 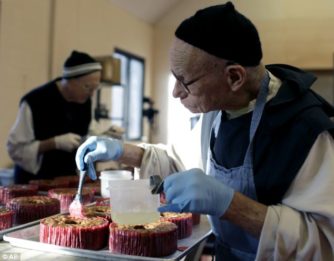 Two Abbeys in the US are said to have the best fruitcakes as tasted and determined by Village Voice writer, Robert Sietsema. The Trappist Monks Abbey of Gethsemane, Ky., and Monks at Holy Cross Abbey, Va. They sell about 10,000 of these infamous fruited cakes per year. Theirs are the highest in booze content, the first saturating their cakes with burgundy wine and Kentucky Bourbon while the latter douses with fine sherry and a sugary glaze. Betty Crocker would be proud of the Monks at Holy Cross. They claim they based their famous recipe on one of Betty’s! Must be that ‘lil extra holy somethin’ something’ that offers a boost to the otherwise less than glamorous product.

Due to the generous nuts covering the top of most fruitcakes, the phrase “Nutty as a Fruitcake” came into play in 1935. Huh….ya’ learn something new every day!

The following are suggested uses found under Christmas Jokes-Uses for Christmas Fruitcakes 2008:

*Bury in the backyard for future archaeologists to discover 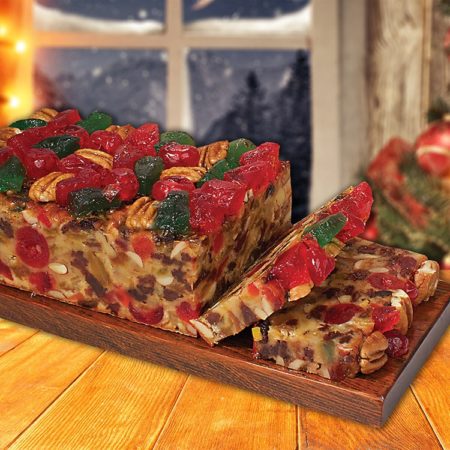 *Give them to your son for a science project

*Hang onto it to find out if there REALLY is more than one Fruitcake making its rounds every year.

*Use it to hold up a broken table or chair leg

*Use as an exercise stepping block for step aerobics

*Use them to pave the freeways with, Just place on road and run a steamroller over them

*Use them as fillers to repair the river levees with! They last indefinitely and are so dense, water can never penetrate them

*Last and probably least, try eating it! It’s one way to get rid of it!

Such an interesting “food item” with a rich history!

fruitcake left in everyone of us……

Note: Seriously…..IF you have the pleasure of receiving a fruitcake…..slice about a ½ inch piece and broil until begins to toast. Much better!