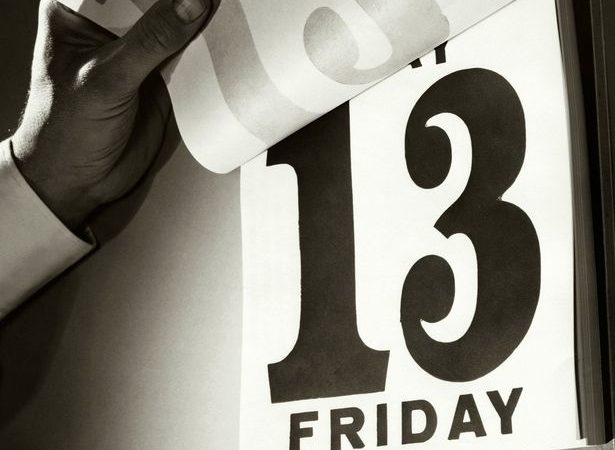 Long considered a harbinger of bad luck, Friday the 13th has inspired a late 19th-century secret society, an early 20th-century novel, a horror film franchise and not one but two unwieldy terms—
paraskavedekatriaphobia and friggatriskaidekaphobia—that describes the fear of this supposedly unlucky day.

The Fear of 13
Just like walking under a ladder, crossing paths with a black cat or breaking a mirror, many people hold fast to the
belief that Friday the 13th brings bad luck. Though it’s uncertain exactly when this particular tradition began, negative superstitions have swirled around the number 13 for centuries. While Western cultures have historically associated the number 12 with completeness (there are 12 days of Christmas, 12 months and zodiac signs, 12 labors of Hercules, 12 Gods of Olympus and 12 tribes of Israel, just to name a few examples), its successor 13 has a long history as a sign of bad luck.
The ancient Code of Hammurabi, for example, reportedly omitted a 13th law from its list of legal rules. Though this was probably a clerical error, superstitious people sometimes point to this as proof of 13’s longstanding negative associations.
Fear of the number 13 has even earned a psychological term: triskaidekaphobia.

Why is Friday the 13th Unlucky?
According to biblical tradition, 13 guests attended the Last Supper, held on Maundy Thursday, including Jesus and his 12 apostles (one of whom, Judas, betrayed him). The next day, of course, was Good Friday, the day of Jesus’ crucifixion.
The seating arrangement at the Last Supper is believed to have given rise to a longstanding Christian superstition that having 13 guests at a table was a bad omen — specifically, that it was courting death.
Though Friday’s negative associations are weaker, some have suggested they also have roots in Christian tradition: Just as Jesus was crucified on a Friday, Friday was also said to be the day Eve gave Adam the fateful apple from the Tree of Knowledge, as well as the day Cain killed his brother, Abel.

The Thirteen Club
In the late-19th century, a New Yorker named Captain William Fowler (1827-1897) sought to remove the enduring stigma surrounding the number 13—and particularly the unwritten rule about not having 13 guests at a dinner table—by founding an exclusive society called the Thirteen Club.
The group dined regularly on the 13th day of the month in room 13 of the Knickerbocker Cottage, a popular watering hole Fowler owned from 1863 to 1883.
Before sitting down for a 13-course dinner, members would pass beneath a ladder and a banner reading “Morituri te Salutamus,” Latin for “Those of us who are about to die, salute you.”
Four former U.S. presidents (Chester A. Arthur, Grover Cleveland, Benjamin Harrison, and Theodore Roosevelt) would join the Thirteen Club’s ranks at one time or another.
Friday the 13th in Pop Culture
An important milestone in the history of Friday the 13th legend in particular (not just the number 13) occurred in 1907, with the publication of the novel Friday, the Thirteenth written by Thomas William Lawson.
The book told the story of a New York City stockbroker who plays on superstitions about the date to create chaos on Wall Street and make a killing on the market.
The horror movie Friday the 13th, released in 1980, introduced the world to a hockey mask-wearing killer named Jason and is perhaps the best-known example of the famous superstition in pop culture history. The movie spawned multiple sequels, as well as comic books, novellas, video games, related merchandise, and countless terrifying Halloween costumes.

In recent times, a number of traumatic events have occurred on Friday the 13th, including the German bombing of Buckingham Palace (September 1940); the murder of Kitty Genovese in Queens, New York (March 1964); a cyclone that killed more than 300,000 people in Bangladesh (November 1970); the disappearance of a Chilean Air Force plane in the Andes (October 1972); the death of rapper Tupac Shakur (September 1996) and the crash of the Costa Concordia cruise ship off the coast of Italy, which killed 30 people (January 2012).