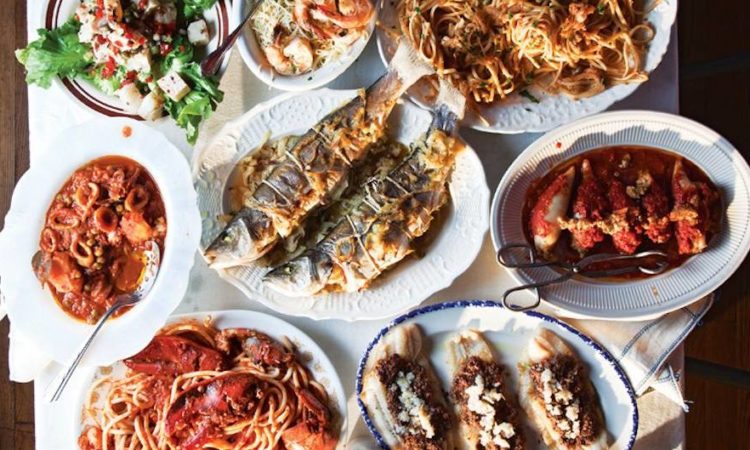 By Barbara Hay ~
In Italian families, the Christmas Eve meal is all about the fish. While other Christian families throughout the world celebrate this momentous meal with various meats, it is a tradition for Italian cooks to serve seven different types of fish. In Italian, the meal is known as La Vigilia, or Feast of the Seven Fishes, and it is one of Italy’s most famous traditions. Having not a single drop of Italian blood in my veins I had to ask all my Italian friends how they celebrated this most special of feasts. Southern Italians around the world celebrate Christmas Eve with a Feast of the Seven Fishes(festa dei sette pesci in Italian), also known as La Vigilia (Italian for the vigil).

By all accounts, the Feast of the Seven Fishes began in southern Italy and the island of Sicily. At one time, Rome, the Eternal City, was the northernmost point where La Vigilia was celebrated. The “Feasts” starts as an Italian Christmas Eve dinner celebrated with specific fish and seafood, dishes that are considered traditional. The most famous dish Southern Italians are known for is Baccalà (salted cod-fish). Reasons for celebrating with such a simple fish as Baccalà is attributed to the greatly impoverished regions of Southern Italy. Fried Smelts, calamari, and other types of seafood have been incorporated into the Christmas Eve dinner over the years and sensationalized by Italian Americans.

Today Italians throughout the world celebrate it. The tradition of eating seafood on Christmas Eve dates from the medieval Roman Catholic tradition of abstinence—in this case, refraining from the consumption of meat or milk products—on Fridays and specific holy days. As no meat or butter could be used, observant Catholics would instead eat fish, typically fried in oil.

For many Italians and those of Italian descent, delightfully gathering around a bountiful, beautifully laid table and indulging in unforgettable regional dishes are enough to inspire the greatest of culinary feats. During the convivial Christmas holiday atmosphere, fanciful specialties claim a place of honor at the table. These are traditional dishes that add a festive note to seasonal menus.

No one knows for sure the significance of offering seven fishes, although there are numerous explanations for it.

The number seven is what is known as a Magic Number in many societies, along with the numbers one and three. That is, these numbers, along with other numbers in varying cultures have special meaning.

Some believe that seven fishes are served because it took God seven days to create the world, while others mention the Seven Hills of Rome. There is also the possibility that the seven fishes symbolize the seven sacraments in the Catholic Church, along with the seven sins. Another theory states seven is a number representing perfection: the traditional Biblical number for Divinity is three, and for Earth is four, and the combination of these numbers, or seven, represents God on Earth, or Jesus Christ. Today, the number of fishes served varies, although seven remains the historical number.

For La Vigilia, there are no requirements as to which types of fish need to be served. In Italy however, eel is regarded as a delicacy and so, it is perhaps the only non-fish on the table. The components to the meal are similar for most families as there are always some seven combinations of anchovies, sardines, dried salt cod, smelts, roasted or fried eel, squid, octopus, shrimp, mussels, and clams with a choice of vermicelli with either garlic and olive oil. The Feast of the Fishes usually begins with antipasto, the Italian equivalent of hors d´oeuvres. This can include a variety of cold foods such as cheeses and raw or marinated vegetables including drowned broccoli rabe (also known as Christmas Broccoli) and caponata di pesce (fish salad) followed by other fish dishes of your choosing, to complete the main course. Added to the mix are pastas, vegetables, baked or fried kale patties, baked goods, and homemade wine.

The meal ends with any number of delectable desserts. One that is almost always present is the requisite panettone, the famous sweet cake-like Christmas bread that is eaten during the Christmas holidays.