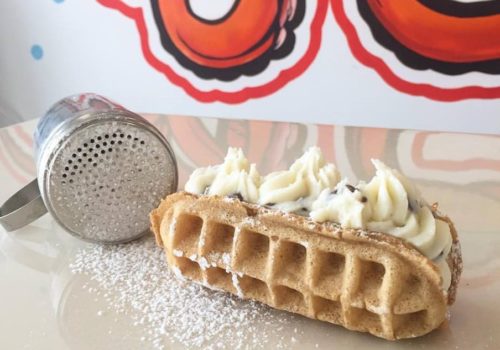 What’s shaped like a hot dog has multiple scoops of ice cream and often other yummy items on top? A Coney Waffle of course. If you haven’t tried one yet, the upcoming warm weather is as good a reason as any to do so.

But be warned! You better bring your appetite or a friend to share it with you.

Where can you find a Coney Waffle? Right now there are four stores, including locations in Red Bank and Pier Village in Long Branch that stay open year-round. The Asbury Park and Belmar businesses are seasonal, but you’re in luck because they are now open on the weekends, weather permitting. 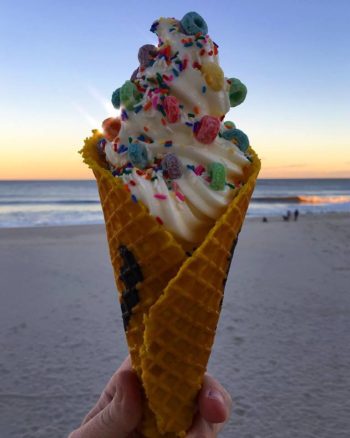 Owner Joe D’Esposito says the trip is worth it because Coney Waffle is far from your typical ice cream shop. “It’s an experience when people come into our stores,” says Joe. “We have made a name for ourselves and people come from miles away just to check us out. “We’ve had people from Ohio who said they had never been to the Jersey shore but decided to make the trip as an excuse to visit our store.”

A native of South River, Joe is no stranger to owning a business. When he was 21, he opened a Hess gas station on Route 18 in East Brunswick with his brother Mike and he has owned several other companies as well. The idea for Coney Waffle dates back to 1946 when his grandmother Angiolina D’Esposito and his father, Joseph D’Esposito, sold a modified version of the waffle and ice cream creation along the boardwalk in Coney Island.

Joe first started selling his waffles and ice cream in 2014, the same year he secured a patent for the waffle. In the beginning, it was a mobile operation with Joe showcasing his products at prominent events like the New Jersey Seafood Festival, Lobsterfest, and the Middlesex County Fair.

The first brick-and-mortar location opened in Belmar in 2016 and Coney Waffle has been on a roll ever since. The newest store got up and running on Broad Street in Red Bank last August. 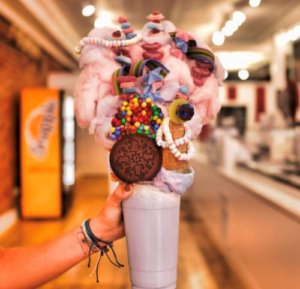 The famous waffle cone isn’t the only thing sold at Coney Waffle. There are also giant soda floats and two-foot-tall Sideshow Shakes, whose name harkens back to its Coney Island roots. There are more traditional waffle cones as well, but those too look a little different because they are all decked out in unique designs.

“Another popular item is our signature waffle filled with cannoli cream,” says Joe. “We are known for our over the top desserts and there isn’t much that we do that is traditional.” Recently Coney Waffle began offering its own line of decorated cakes, which customers can customize to their own tastes. “For example, one customer wanted a mint chocolate chip and rum raisin ice cream cake,” he says. “We decorate the cakes with whatever they are made out of.”

Although Coney Waffle has been featured on the Travel Channel’s Food Paradise show, television news segments as well as in magazines and newspaper articles, a large portion of the business comes through word of mouth and ads on social media.

For more information on store locations and hours, go to coneywaffle.com.