Chris Soltis- Sounds and Talents of the Jersey Shore 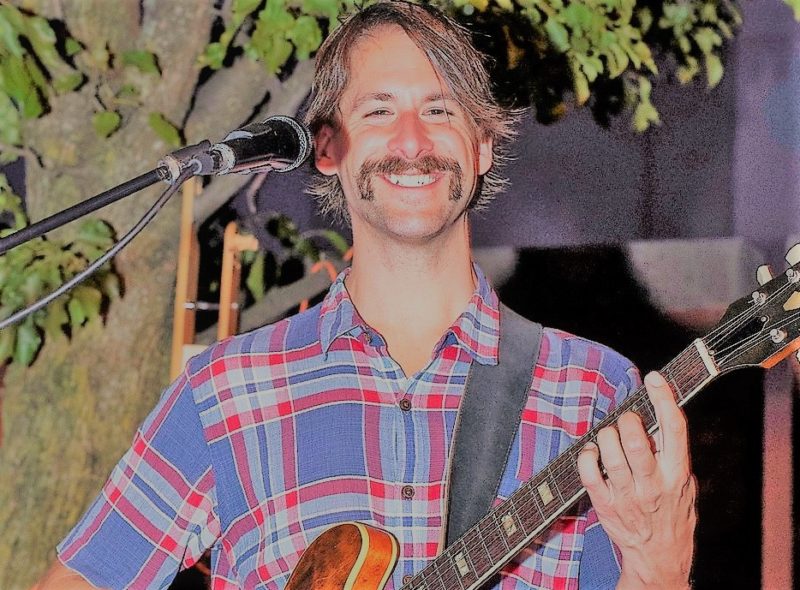 We missed a month on our Sounds and Talents of the Jersey Shore! Everyone is so busy during summer months including musicians! Fall has crept in and I can pick up the tunes again! Meet Chris Soltis –  Musician of the Month.

A fun cover band that many of our local followers are quite familiar with that until recently I had the pleasure to learn about is enjoy! The band consists of four talented guys- Chris Soltis, his twin, John Soltis, Brendan Brophy and Lou Donovan. Chris and John grew up in Cranford, just 50 minutes north of the Spring Lake/Belmar area. Growing up, Chris spent summers in Brielle at the family’s summer shore house. About 15 years ago, Chris moved down to this area full-time. And many are glad he did!

As many musicians I meet, Chris comes from a musically inclined family. Twin brother, John, plays bass in their band as well as mandolin. His dad professes that grandma “thought” she could play the organ while Chris’s mom’s great granddad was into playing the Chromatic Harmonica.

Chris remembers one of his earliest inspirations that “lit the fire” to play the electric guitar as his “creative outlet” was watching an MTV music video in the early 90’s of Pearl Jam’s ‘Even Flow’. After watching what Chris refers to as “longhaired madmen flailing around on stage creating these awesome sounds, having the time of their lives & giving it their all, in front of thousands of frenzied fans singing & dancing along”, he felt this is what he wants to do! 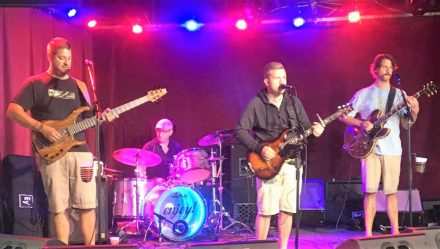 Finding it hard to pin point a favorite musician while having been inspired by many guitarists, musicians and bands, Chris feels Trey Anastasio of the band Phish had been a major influence. He feels what Trey and Phish have done for the live music scene over a 35 year span is historic. He also credits inspiration from a slew of guitarists such as: Jerry Garcia, Duane Allman, Eric Clapton, Stevie Ray Vaughan, Wes Montgomery, George Benson, Grant Green, Joe Pass, Barney Kessel, Kenny Burrell, Django Reinhardt, Jon McLaughlin, Denny Dias, Larry Carlton, Derek Trucks, Warren Haynes, Eric Krasno, Charlie Hunter….and the list goes on.

Piano lessons at 11 years old began his musical journey. Chris remembers his uncle giving he and his brother a 1976 Hohner acoustic guitar which he began picking on by age 13. He began guitar lessons briefly in high school but soon realized the musical theory he absorbed via piano lessons, high school band and choir gave him what he needed to study on his own. Chris says he had 4 music classes in senior year in prepping for studying jazz performance at William Paterson College (now University). He was active in choir, madrigal (chamber singers), band and jazz band.

Both Chris and his brother had original bands in high school as well as in college. Their college band was called Shady Groove and they recorded an album in 2003 which can be found on sites such as iTunes.

Although Chris says he hasn’t ‘tickled the ivories’ in a while, he can still sit down, read and play through some classical pieces. He’s been playing banjo for about 20 years as well as playing the ukulele. His Gibson seems to be #1 but he says he’ll break out the Fender Telecaster or Strat every once in a while. Chris feels for what enjoy! does live, the “double humbuckers & ease of finding the right tone per song works better (for him) than regular guitars with single coil pickups.”

Chris enjoys all types of music, from free jazz to bluegrass, punk and all styles in between. His band enjoy! has been performing many styles for 16 years! One will hear anything from classics like Frank Sinatra and Bobby Darin to Rage Against the Machine and Iron Maiden. He’s proud to report that enjoy! recorded an original album, ‘The Eleven’ as well as recording and producing another album of some Shady Groove songs under his name titled ‘Manifest Destination’. The original songs can’t be pigeonholed to a specific genre as they are all different. They range from country, reggae, acid jazz, R&B, funk, hard rock and island styles.

Enjoying the fun creative outlets that playing offers, Chris feels expressing himself and being able to relate to an audience who is smiling, singing, laughing & dancing is what it’s all about. He says “everyone should have a creative or artistic medium to connect with as it is tantamount in staying healthy and happy.” 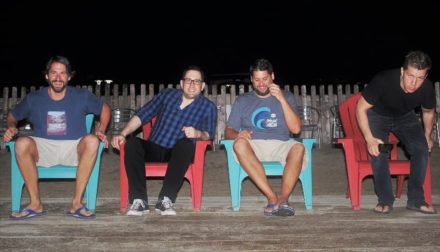 Although music is in the life blood, Chris’s ‘non-musical’ work for 17 years has been in the financial services field. He works as a Regional Supervisory Principal with a brokerage firm, has a Certified Financial Planner’s designation, 5 FINRA securities licenses and….certified to teach yoga! WOW! In addition to all of his accomplishments and busy life, Chris is currently publishing a book! As Chris says: “never stop learning!”

enjoy! has developed a following over the years. enjoy! has a FB, Twitter and Instagram page and drummer, Lou, and brother John, are the primary points of contact in keeping them active. enjoy!’s primary circuit shoots between Point Pleasant and Sea Bright. You can find Chris and the guys of enjoy! performing at many venues including The Wonder Bar, Wharfside Patio Bar, The Salty Whale (formally the Manasquan Beach House), Reef & Barrel, Spring Lake Tap House, Parker House, Joe’s Surf Shack, The Boathouse, Anchor’s Tavern, Porta, Donovan’s Reef and The Proving Ground.

enjoy! has ventured as far as California and Vermont & if the logistics make sense Chris says “we’ll play on the Moon”. They do private parties, Weddings, Grand Openings, birthdays, anniversary parties, retirements, you name it! For an event that calls for great live music- look no further! Check out their website: http://enjoytheband.com/ and like ‘em on FaceBook!