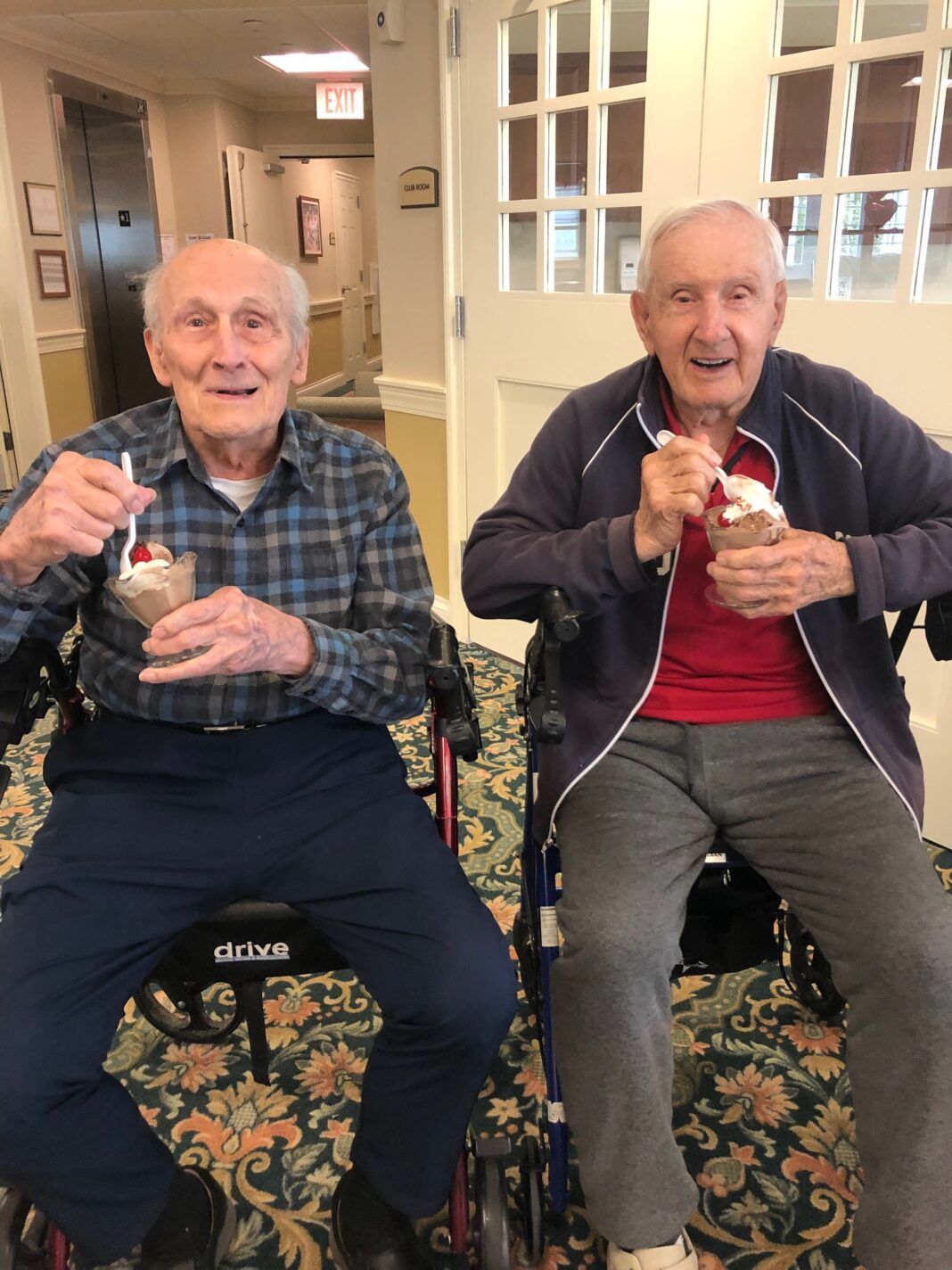 The current statistics of males to females living in an assisted living community are staggeringly diverse. With an average age of 85 upon moving in, the number of women outnumbers men by 75% within their community. Knowing statistics like that, it is an amazing feat for men to make connections, let alone meaningful friendships.

With that in mind, Sunnyside Manor in Wall Township celebrated National Best Friends Day on June 8th, through the friendship of Frank and John, two best friends and residents at the senior living community.

Frank, 99, known for his superb piano playing, joined the Sunnyside Manor community during a very significant time in February 2020 when Covid-19 was at its height. Communal activities and social events were coming to a halt, especially in the realm of senior living communities for the aging population. Unlike many, Frank used this time to fuel his hobby to uplift the spirits of staff and residents alike by playing the piano in the main lobby.

John, 93, a social butterfly within the neighborhood, soon made friends with his new pal Frank. Early in the friendship, Frank invited his peers and new buddy, John, to gather after dinner and enjoy his impromptu piano concerto. John was impressed with Frank’s ability and talent in playing any requested song. “John is fun-loving and outgoing, with a great personality and sense of humor. He would lead groups in singalongs while Frank played the piano, encouraging residents to make requests, hoping to stump Frank. It was fun to watch”, says John F. Keane, Jr, co-owner of Sunnyside Manor.

Besides singalongs in the main lobby, the two best friends never miss the opportunity to coordinate which activities they will attend during the day and share in the enjoyment of trivia socials, musical entertainment performances, happy hour soirees, morning exercises, outdoor gatherings, movie matinees, meals, and after dinner get-togethers.

“It is heartwarming to see two men come together to form such a strong friendship during a time when socializing was almost nonexistent,” says MaryEllen Keane, co-owner of Sunnyside Manor. You can often see them scanning the room as they enter a program to find each other to sit next to.

MaryEllen continues, “Because of John’s social habits, Frank grew to become more social and attend more out-of-room activities, which is so important when living in a community.”

In all the laughter and conversations, Frank and John have found in each other someone that shares in the same interests. They have what they both described as “a true friendship.”

Sunnyside Manor, which has been owned and managed by the Keane family for over 30 years, expanded and relocated to Wall, NJ in 2015. Sunnyside has been providing care in the area for over 100 years. The new Sunnyside Manor provides a continuum of care in three distinct neighborhoods:  Independence ‘Plus’ Assisted Living, Recollections Memory Care and Skilled Nursing. For more information, call 844-388-6069