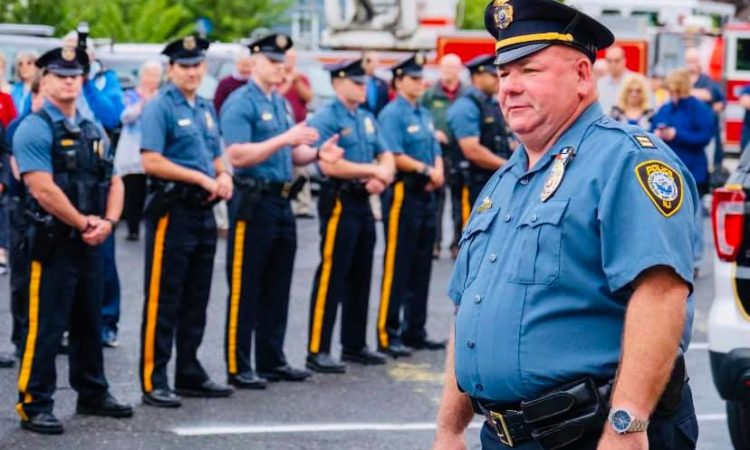 It was almost as if the entire town was tearing up at the retirement ceremony for Captain Thomas Stone, but just as the 34-year veteran came up the steps from Police Headquarters to give his final signoff to the County Dispatcher, umbrellas went down, clouds passed and residents and police alike cheered for the retiring officer Friday afternoon.

The crowd stood silently as Stone began his final walk out and went in the patrol car for his final signoff with the Monmouth County Dispatcher. The call was acknowledged and received with best wishes and thanks for his years of service, and the fire department sounded the fire whistle loud and long in his honor. The volunteer department had also brought out its ladder truck to have a large American flag flying over the borough hall parking lot where Stone’s final farewells took place.

The officer went down the two lines of local and neighboring police officers, including his own Chief David Rossbach, accepting the congratulations and best wishes from each as they shook hands and saluted. 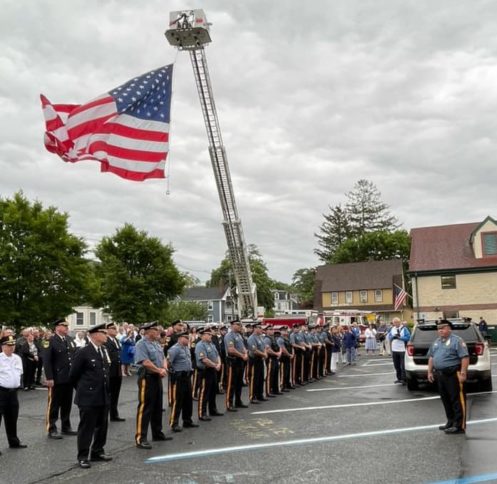 Following the ceremony, the crowd gathered at the Shore Casino for more ceremony, memories and an informal and festive farewell.  The Rev. Fernando Lopez formerly of Our Lady of Perpetual Help St. Agnes parish, now with Holy Trinity in Long Branch, gave a blessing and read a retirement poem for Stone. Father Fernando has been the chaplain of both the Atlantic Highlands and Highlands police departments. Former Chief Gerry Vasto recalled the days when Stone answered to him and presented him with a bronze statue bearing Stone’s badge number, 125. Chief Rossbach also thanked the retiring captain for his years of service and his dedication to duty.  Stone’s wife, Alisa, thanked the borough residents for the ways they have responded noting that “Tom  has touched everyone here in some way,” and said she refers to him herself as “the answer man.” “He loves Atlantic Highlands, “ she told the guests in the Casino, and I’m so glad you love him back.” Now, she said, she is happy to have him home as “good old Tommy Stone.”

Stone said he was humbled by the attention and grateful for all who could attend the walkout. Working on the Atlantic Highlands police department, he said, is what dreams are made of, and “I lived it and I loved it.” He praised what he described now as a young department and “better than the best.” However, he added, addressing the local department members, “I wish you the best, ..but you know my phone number.”

Stone also acknowledged guests at the event who were graduates with him from MAST in the 1980s, one of the first classes to complete four years at the all student  NJROTC County high school, and once again praised the discipline, order and education he received at the school, as well as the friends he made there. He thanked his step-son, Matthew and his daughter, Casey,  for all their support throughout his career and promised more time with them in his future retirement.