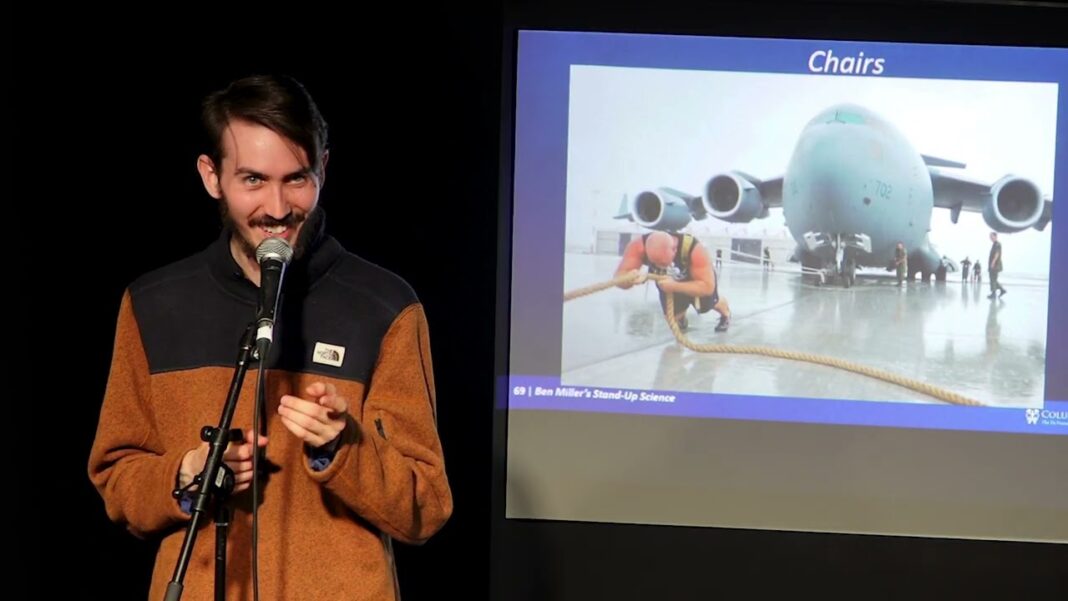 Coming to Showroom Cinemas in Asbury Park in January is a multimedia stand-up comedy show about science.

A show that’s equal measures hilarious, educational, and deeply personal. NYC-based scientist and comedian Ben Miller uses stories on topics ranging from his musculoskeletal condition to his childhood history with milk as jumping-off points for scientific and comedic exploration. Using pictures, graphs, and videos, this multimedia comedy show makes science both approachable and delightful. And you probably like that sort of thing, nerd.

For his first few years as a comedian, Ben was extremely hesitant to tell people that he was a scientist with an ivy league education. Ben worried about coming off as pretentious or unrelatable, something that can easily kill any connection with an audience. Even most other comedians had no idea about his background. But during the lockdowns, he started to reconsider this aversion to discussing his scientific identity and began to realize it was something that made him unique amongst most comedians. Perhaps Ben could combine his skills to both educate and amuse, making science funny and accessible. So, he filmed a few episodes of a web series very uncreatively titled “Stand-Up Science.”  He was genuinely nervous to share the video, but the response was incredible, so he continued making the web-series that has now been developed into the live show that had a completely sold-out run at the 2022 Edinburgh Fringe Festival and now he’s touring around the US.

Ben Miller is an NYC-based comedian who has been working for the past 6 years and in that time, he’s performed at all the top clubs in the city such as Broadway Comedy Club, Stand Up NY, Dangerfield’s, Carolines, and The Stand. He’s currently ranked as the top roast battler in NYC. He also has a degree in Materials Science and Engineering from Columbia University. He’s worked with electron microscopes, been a teacher on a science bus, 3D printed cookies, and diffused a few bar fights while on stage.

The show is hosted by Mark Henely and features Angelo Gingerelli.

Mark Henely is a stand-up comedian who is regularly featured on Comedy Fight Club, has performed at the Edinburgh Fringe Festival, and many prestigious comedy clubs in NYC such as the Stand. But, more important than that, Mark was born on the Jersey Shore and is a Jersey Shore boy through and through. He is a 2x nominee for Top Comedian at the Asbury Park Music Awards and played the lead role of Wilbur in Belmar Elementary’s 1996 2nd Grade Play. He is also sick of all the Bennies and their terrible driving.

One of Angelo Gingerelli’s first comedy events was “Comedy on Cookman” at the original ShowRoom, which ran from 2013-2015. This was the first monthly comedy showcase in Asbury Park and is widely credited as one of the events that started the Jersey Shore Comedy Scene. Gingerelli is a stand-up comic, author and podcaster that lives in Long Branch and could not be more excited to be telling jokes at The ShowRoom again. He is one half of Ugly Pancake Productions, a local comedy event organization.

“One of NYC’s best pound-for-pound joke writers Ben Miller is unsurprisingly a scientist… you have to see this just for the Spike Lee joke, I almost spit milk out my nose when I heard it.” [Matt Levy, Comedy Stray Notes]

“Ben is genuinely engaging and very funny (for a geek!)” – Audience member

“THIS GUY IS JUST GREAT. So funny, very unique and so so likeable, I felt completely relaxed and enjoyed every second. Not only is his material brilliant and clever but his ad-libs are spot on and he always feels genuine and likable.” – Audience member

“Have you ever seen a comedian cite their sources? Ben Miller does. Check it out, it’s worth it.” – Audience member