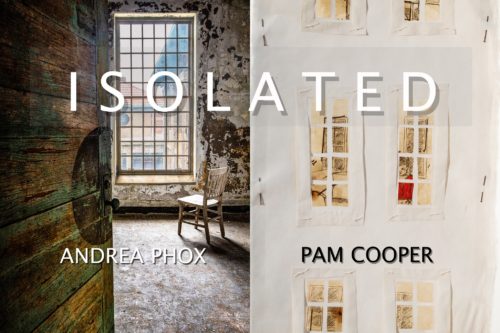 Andrea Phox’s images of Ellis Island Immigration Hospital and Pam Cooper’s paper structures explore institutional and personal isolation. There are many reasons why people become Isolated, enforced Isolation due to contagious diseases, violent behavior or for their own safety and voluntary isolation. Andrea Phox with her photographs of Ellis Island and Pam Cooper with her paper structures are taking a look at Isolation, past and present.

ISOLATED: Past and Present There are many reasons why people become Isolated, enforced Isolation due to contagious diseases, violent behavior or for their own safety and voluntary isolation. Andrea Phox with her photographs of Ellis Island and Pam Cooper with her paper structures are taking a look at Isolation, past and present Andrea Phox has been exploring and documenting America’s historic gateway, Ellis Island Immigration Inspection Station and Hospital located at the mouth of New York Harbor between New Jersey and New York. For the past two years, Andrea co-leads with Tony Sweet on his famous Ellis Island Tours for Photographers. 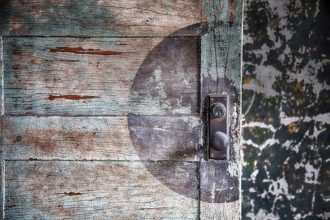 The proceeds from this program go to the “Save Ellis Island” foundation. Andrea has captured Ellis in all seasons and conditions; her repeating angles recorded over time offer a visceral relationship with the immigrant experience. Through her lens, the viewer engages with Ellis’s resonant ageless story. In the current political climate and throughout history, immigration has been a divisive subject. At the core of the immigrant inspection experience was the terrifying prospect that a single government inspector or doctor could decide the fate of a person or family. One government official could send an immigrant back to the horrors from which they had escaped. The word isolation has many threads and they exist simultaneously at Ellis Island. Some immigrants were sent to isolation wards to protect other people from their diseases; there were lockup wards where the mentally ill were placed to protect the world from them. The whole island was built in the middle of New York harbor, no bridges, totally isolated from the world, yet looking North from Ellis one can see the entire Manhattan skyline evolving in the distance. Looking South from Ellis you are greeted by Lady Liberty herself, with all her promises of freedom.

Andrea Phox is an award-winning Master Photographer. She has a busy portrait business at the Jersey shore which started in 2001. She uses all post-production software available to enhance the images she captures. Andrea is an educator at Ellis and in Cuba with her work partner Tony Sweet. Andrea earned her BFA in 1980 at The Minneapolis School of Art and Design and studied at the Whitney Independent Study Program. Her approach to making images is primarily to utilize and discover the possibilities of this digital media. Her position as an artist is to learn to see.

Pam Cooper is exhibiting her series of paper sculptures ‘My Space’, ‘My Domains’ and Window Books. With all of these works, the viewer is required to peep inside the structures becoming the voyeur. In the present, with the meteoric rise in social media, there has been an increase in voluntary isolation although we don’t seem to realize how isolated we are becoming. Hours spent online alone at our devices along with hundreds of ‘friends’ who we don’t really know and will never meet. Who tells the truth online, posts their worries, anxieties and insecurities, we only post the ‘good stuff’. It seems that everyone else is happier and having a better social life than we are which can push us further into isolation and depression. Our freedom of access to the internet wonderful but we must learn to use it as a tool and not let it define our lives. 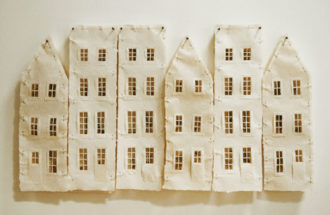 Pam Cooper makes all her own paper to the size and shape she requires for each work. The images are Xerox transfers of her drawings influenced by the images of children on old sewing pattern packets and interior dioramas. Although the overall feeling is that these are from times gone by, the issues she deals with are very much of today.
Pam Cooper has exhibited widely throughout the U.S. She has been included in the New Jersey Art Annual a number of times and her handmade books are represented in several College collections. She moved from the U.K. to the U.S. in 1990 and attended Pratt Institute graduating with a BFA in 1994