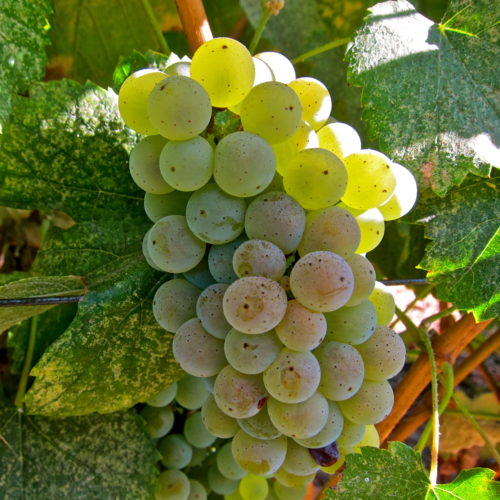 Rías Baixas, in Galicia, is damp when there isn’t rain, and when there is rain, it’s just plain wet. Albariño vines thrive in this drizzly corner of northwestern Spain. While Rías Baixas is misty and cool and all gray-green-Atlantic, Albariño itself is  the  embodiment of Galileo’s famous saying that “wine is sunlight, held together by water.”

Albariño is bright and zesty and crisp. When it doesn’t taste like fresh grapefruit, it tastes like fresh pineapple, always with an underlying, evocative seashell minerality.

Albariño’s success has been a boon for Galicia, a poor province. Interestingly, Albariño vines are trained on granite posts that are often at levels higher than an average person is tall. The historical reason is that this method allows grapes to hang down; allowing for ventilation and preventing rot, a problem here. Another reason often given for the grapevines being trained so high, it that it allows families to grow vegetables and raise chickens underneath the vines from September until June, when the vines are dormant. But it’s this Atlantic climate that allows this region to produce these simply delicious wines.

Rías Baixas wine production has been a long-term trend toward wines that are light, simple, affordable and released as soon as possible after harvest, usually in January. However, the question is whether these wines are crowding out the more ambitious Albariños, those where the winemakers are trying to realize the full potential of the grape. You’ll find complex, ambitious and pricey versions appearing on wine lists in top restaurants; at the same time, appealing basic Albariños have become wine-shop mainstays.

Accompanied by raw oysters; cockles with paprika and olive oil; clams; meaty hake or halibut served with langoustines, mushrooms and potatoes; shrimp or any other kind of seafood or shellfish Albariño shines.

I find that I enjoy both the simple and the ambitious styles—and there are actually more age-worthy, complex Albariños around now than there used to be, though it is true that the more basic, less expensive wines are all great beginnings to outdoor summer parties.