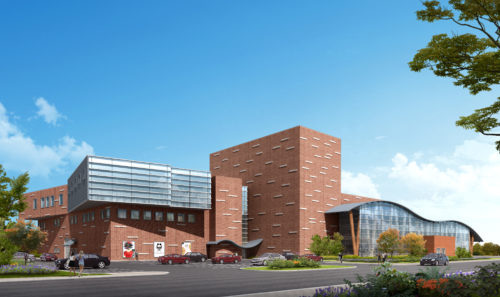 Many of us plan memorable celebrations for our 25th birthdays and Two River Theater in Red Bank is no exception. In the case of the nonprofit professional theatrical organization, employees are marking its 25th anniversary with the opening of the new state-of-the-art Center for New Work, Education and Design.

“We have been in need of modern scene shops, additional offices, rehearsal space and storage for a while now,” says Michael Hurst, managing director of the theater. “The new building fulfills all of our needs, making it easier and more efficient for us to support our productions, develop new work and provide educational programs to the public.”  Indeed the theater has grown quite a bit since Joan and Robert Rechnitz founded it in 1994 to develop and produce world-class performances. 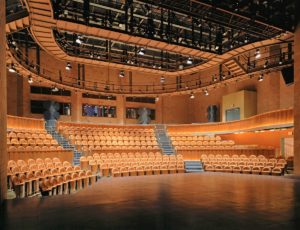 In the beginning, the theater operated out of Monmouth University, later showcasing works at the Algonquin Arts Theatre in Manasquan. Since 2005 it has been located at 21 Bridge Avenue in Red Bank. It features two main venues: The Joan and Robert Rechnitz Theater, which seats 350 patrons and the Marion Huber Theater, a 110-seat black box performance space. They feature a diverse range of classics, new plays and musicals, free audience engagement programs and arts education for students and young people.

“Single ticket buyers make up the majority of our patrons, but thousands of subscribers save by signing up for three or more productions each season,” says Hurst. Since moving to Red Bank, employees have relied on the Chavant Building across the parking lot to create scenery and props and store costumes. But Hurst says as the number of employees continued to grow and the building fell into disrepair it was clear a newer, more modern facility was needed.

“When we opened the new theater in 2005 we had approximately 10 employees,” he says. “We now have 50 employees. The deteriorating Chavant building was becoming a difficult place to work.  “For example, the very old heating and cooling system in the building does not work properly,” says Hurst. “We also lacked proper space to rehearse our shows and we needed more space for our educational programs as well.”

But none of that will be a problem once they move into the three-story Center for New Work, Education and Design later this summer. Connected to the main theater building, it will include two rehearsal studios, expanded scene shop spaces, a formal wood shop for the props department, a large costume shop, offices for production and education staff as well as multiple storage areas. 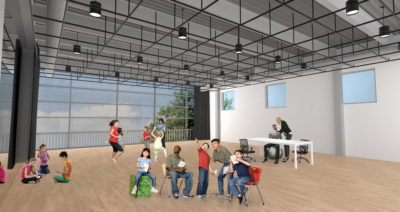 “We anticipate that we may hold many of our free community events that we offer through our ‘Inside Two River’ program in the new building,” says Hurst. Once they move out of the Chavant Building, it will be demolished and the parking lot reconfigured. Hurst expects the entire project to be completed in October.

In the meantime, the theater is gearing up for the opening of “Oo-Bla-Dee,” which runs from June 8 through June 30. Written by Golden Globe Award winner Regina Taylor and directed by Tony Award winner Ruben Santiago-Hudson, the production follows Evelyn Waters and the Diviners, an all-Black, all-female jazz band, as they travel from St. Louis to Chicago to get a record deal in the aftermath of World War II.

“We have been developing the play for a number of years and it’s a great example of the work we do here and our commitment to making a home for artists,” says Hurst. “Oo-Bla-Dee marks director Ruben Santiago-Hudson’s fifth production at Two River.”

For more information about the theater or to purchase tickets go to https://tworivertheater.org/.