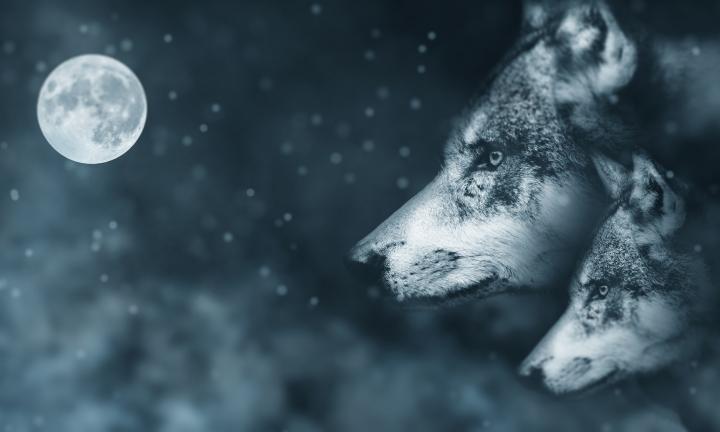 Tonight the Full Wolf Moon rises, the first of 13 full Moons this year. Some folks will see an eclipse! Learn more about when, where, and how to see the January full Moon!

Look skyward at nightfall of Friday, January 10, 2020, to spot the first full Moon of the year: the shining Full Wolf Moon.

January’s full Moon will reach peak fullness—meaning 100% of its face will be illuminated—at 2:21 P.M. EST on the 10th, but it will not appear in the sky until later that day.

For the best view, look for the full Moon rising from the horizon around sunset that day.

See your local moonrise times for the best view.

Why Is It Called the Full Wolf Moon?

The full Moon names we use in The Old Farmer’s Almanac come from a number of sources, including Native American groups, Colonial Americans, or other traditional North American names passed down through generations. (Note that each full Moon name was applied to the entire lunar month in which it occurred.)

The Full Moon for January was called the Full Wolf Moon because wolves were more often heard at this time. It was traditionally thought that they howled due to hunger, but there is no evidence for this. However, wolves do tend to howl more often during winter months and generally howl to define territory, locate pack members, and gather for hunting.

In addition, Native American cultures typically hold a lot of respect—not fear—for wolves, so this month’s Moon name should be viewed with that in mind, too.

Other traditional names for the January Moon include: the Cold Moon, the Old Moon, and the Great Spirit Moon. See more Full Moon names and their meanings.