The Sounds and Talents of the Jersey Shore – Ed Bowlby 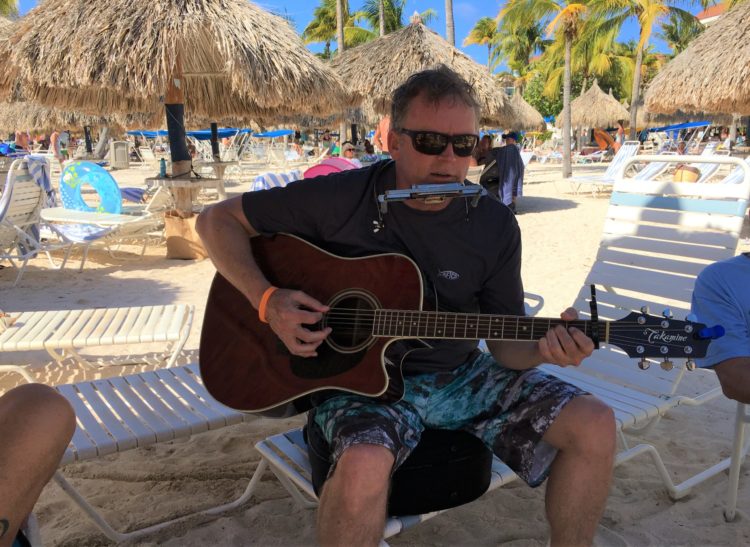 Prior to the Pandemic, back in our “normal life”, we popped into The Windward Tavern, Brick, in support of an old friend/musician, Jeff Pecca, (highlighted previously in JSS) who was playing with another fun musician, Ed Bowlby. We found seats at the homey circular bar with a view of the musicians set up to the rear area of the barroom. We really enjoy the Windward as it is one of the few good ol’ local, privately owned non-commercial restaurants. (And folks, the food is great as are the super friendly staff, owner and patrons!) An earlier start time to live music is always appreciated by us Baby Boomers! This was my 1st intro to Bowlby and we enjoyed the listen!

Ed spent his school years in Somerville and summers here in Manasquan with his family at their beachfront get-away up into the ’90s. Most of us Baby Boomers will remember the “Ukulele Days” growing up listening to at least one grownup breaking out the little “mini” guitar at neighborhood parties. And so does Ed, with memories of his dad playing Irish songs during beach house cocktail parties along with memories of dad jazzing up the tunes in Honkey Tonk style on the old beat-up piano. Ahh, the fun sing-a-long days of the 50 & 60’s! 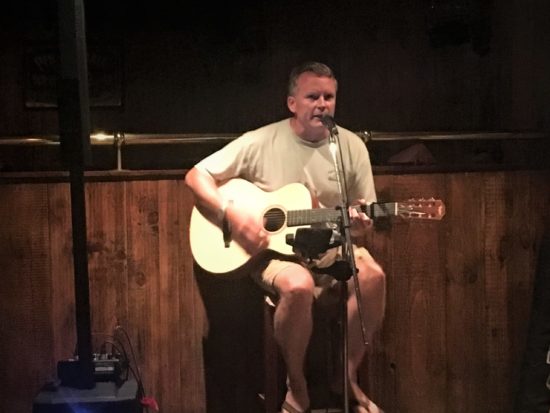 Older brother, Lew, had been a drummer in High School, later mastering the guitar in college. Ed says when his brother began playing acoustic, he enjoyed the sounds and felt it was something he could get into. Although he took lessons in grammar school, there wasn’t a true connection, feeling it was more like work as the lessons were ‘theory centric’. A few years later, Ed picked it back up in High School as he became more connected with music with a desire to sing. Overall, his ability to play guitar has been more or less self-taught by picking a song and learning how to play it. Over time, Ed says it became easier and easier which after having a listen, we can say he was a great teacher to himself!

Although dabbling with piano on occasion, Bowbly’s main instruments are his guitar, harmonica, and a great voice. His guitar of choice is the Taylor 810CE, a high-end acoustic-electric. Ed feels most owning this model would likely leave theirs at home “in a hermetically sealed bag” for fear of damaging…but he gigs with his! The bright sound that Taylor guitars produce is what he loves. Most people seem to find that one special instrument to connect with. In 2005, after playing the Taylor 810CE, Ed knew he’d found his.

Originals are played but Ed focuses more on covers, playing lots of Neil Young, of which the vocal Ed says is in his ‘wheelhouse.’ Another talented local musician, Peter Myers (Google: Peter Myers Music), from Manasquan, is one of Ed’s favorites. He enjoys playing some of Pete’s’ covers citing his friend as a brilliant songwriter.

There are many favorite bands and musicians for Ed, finding it hard to pick just one. If picking just one to have along, he feels it would be The Last Waltz by the Band as it crosses genres so beautifully. He mentions Desert Island and lists merely a handful of favorites as his list could be never-ending. Those making the classic list are:

The Who, Jackson Browne, James Taylor, Todd Rundgren, The Band (my all-time fav) Bruce and many more! 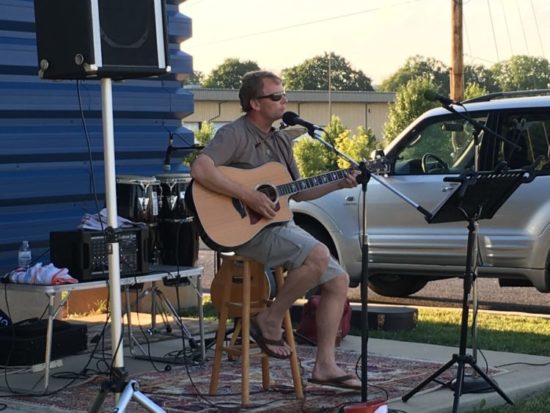 Bowlby’s been doing solo gigs in Jersey shore area pubs for 12 years or so which has been instrumental in building Ed’s following. At one time, Ed would hit the open mics in the area, however now with regular bookings, sitting in at an open mic is an occasional thing. A solo go is his usual mo, but he does play with others here & there and has been known to jump up on stage at a moments’ notice joining other local talents. Harpoon Willy’s, Half Moon Point and the Windward Tavern are where he and his sounds can be found (during non-pandemic days) on a regular basis.

Performing with his guitar is his passion, but Ed’s main occupation is as a software architect at a well-known, 1st class financial institution. Due to his full time demanding job, he stays pretty local but if he does cruise a tad further, it is usually for friends or friends of friends!

Ed says he enjoys it when he can deliver a song the way he knows he’s capable of playing it. Occasionally it can be a challenge. He loves playing a tune an audience isn’t expecting and it connects. Requests are happily taken and he’ll attempt to go as close as possible if he’s not familiar with the song or artist. I love this because many guitarists prefer no requests as they have a planned line up of tunes they are proficient with.

Ed Bowlby is available for private parties, grand openings, birthdays, anniversaries, retirements, etc. You can locate Edward D. Bowlby Jr. on Facebook. He invites you to friend him if interested in following his upcoming performances.

Ebowlby@comcast.net– for inquiries of availability and dates**