It was November 23, 1780.  The tide of war had turned, and  British forces were facing the disconcerting reality that the French Army had joined General Washington, “the colonial.”

Sir George Brydges Rodney was taking his ships of the line south and decided that the British Army’s payroll, a payroll that included approximately $2-4 million in gold coins of back pay for its soldiers (hidden in barrels of chalk), be moved to anchorage off of Gardiner’s Bay on Eastern Long Island.

There it would be safe and could be distributed to the troops. In addition to the payroll and back pay, Hussar carried an additional cargo.  In her dark hold were 70-80 American Prisoners of War, in chains.

The payroll was loaded onto the Mermaid Class Frigate, HMS Hussar under the command of Captain Charles Pole.  Pole, though promoted to Captain only the year before,  had seen action at the siege of Pondicherry in India in October and had been Second-in-Command of the Channel Squadron, under Admiral George Darby.

During that afternoon’s briefing, the pilot of Hussar, an enslaved man named Swan, advised Captain Pole against traversing the treacherous narrow tidal strait, known as Hell Gate, located in the East River in between Queens and Ward’s Island at the center of a confluence of the New York Upper Bay, Long Island Sound, and the Hudson River (via the Harlem River). It runs the span of today’s Manhattan’s 90th Street to 100th Street.

Pole brushed aside the Pilots concerns and the 647-ton, 124-foot Hussar, loaded with gold and human misery in her holds and sporting 28 cannons and 12 swivel cannons began to move along the East River.

As she approached Hell Gate the current began to pick up speed, and eddys turned to whirlpools. Rocks loomed everywhere. The ship began to tremble as competing currents slammed into her on all sides like wild beasts attacking prey. She was not responding to the helm; Swan hung his full body weight on Hussar’s wheel and cursed ferociously.  But not even his creative swear words could save the ship.  Hussar slammed hard into Pot Rock, a giant boulder in the center of the strait and was mortally wounded.

Captain Pole ordered Swan to “run her to ground”, but the current was relentless.  Hussar, her gold, her colonial prisoners, and her glorious naval past, sunk in 96 feet of water at Hell Gate, on November 23, 1780.  All her crew and officers and her enslaved pilot, Swan, survived.  The men chained below deck did not.

Simon Lake was born in Pleasantville, NJ on September 4, 1866, of Miriam Adams and Christopher John Lake.  His father was an inventor and a developer of Atlantic City and Ocean City.  Simon, named for his paternal Grandfather, who was one of the founders of Atlantic City and Ocean City, acquired his passion for engineering working in his father’s foundry and workshop.  But his real inspiration was a copy of Jules Verne’s 20,000 leagues under the sea.  Lake passionately read that book until his copy was hopelessly worn.

Growing up, Simon attended high school at Toms River NJ, then went on to study engineering and Naval Architecture at the Clinton Liberal Institute in New York, and the Franklin Institute in Philadelphia.  Afterward, he found himself winding gears for oyster boats in Baltimore.  But he still dreamt of Captain Nemo and the Nautilus flying through the ocean depths.  “What a world we’d have if we could travel under the sea.”

In 1893, Lake read that the United States Navy was requesting designs for a submarine torpedo boat.  He read the specifications and, though nervous, left his job in Baltimore.  His Uncle, Somers Townsend Champion and his wife Anna Margaret Lake invited Simon to live with them in Atlantic Highlands, NJ. It would be perfect for him.

They lived on Sandy Hook Bay, there were two rivers, the Shrewsbury and the Navesink, all of which were reasonably shallow.  He could build and test his submarine there.  So, Simon took a deep breath, headed north, and sank into his dream

“Sime, I’ll help you, but this will cost a fortune to build.  Where will we get the money?” was Bart Champion’s lament when Simon told him of his plan to compete for the Navies contract.  Lake knew that building this submarine would be expensive.  The design lived in his head.  He knew that he could do it and that once built and demonstrated, his entire world would change. He was on the cusp of a great adventure, just like the heroes in Verne’s novels.

But iron was expensive, and so would be the fabrication of the vessel.  He looked out his Uncle’s window at Sandy Hook Bay for a long while.  After a time, a smile crossed his face.  “Bart, we’ll build her out of wood!  Just like an old sailing ship, wood and resin and pitch!  This way we can afford it!”  Bart Champion, Simon’s cousin, burst out laughing. “Sime! You’re mad. Stark raving mad!  But I must be as well because I think it’s a great idea!” 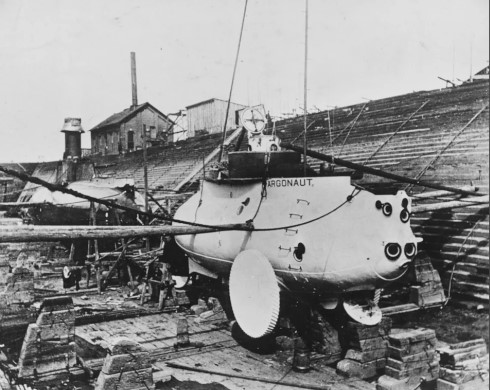 For a year, the two cousins worked on what Simon Lake would later call “Argonaut, Jr.” He chose the name as it is that of a small floating octopus, the female of which has webbed sail-like arms and secretes a thin coiled papery shell in which the eggs are laid. The animal looks similar to the Nautilus. The animal which inspired the name of Captain Nemo’s submarine in 20,000 Leagues Under the Sea.

In December of 1894, Simon and Bart transported the Argonaut Jr. to Blackfish Cove, off Rocky Point at Hartshorne Woods.  There the usually calm water was 20 feet deep and ideal for testing a homemade, wooden submarine.

Argonaut Jr. had several innovative features.  “When submerged to a shallow seafloor, a diver’s door could be opened, and he could retrieve articles or exit and re-enter the little 14- foot submarine by maintaining a pressurized compartment.” In addition, Argonaut Jr. had wheels to roll her across the bottom and prevent her from becoming stuck in the mud.  She moved via a hand crank.  Once submerged, she rode across the river bottom as the two submariners watched riverine creatures through the porthole.  Just like Professor Aronnax had done in Jules Verne’s novel.

The success of their maiden voyage left young Simon positively giddy.  He devised a demonstration that, he believed, would get Argonaut noticed.  He set up a demonstration at the Atlantic Highlands harbor for the press, dignitaries and townspeople.  Argonaut submerged and , after a while, surfaced with Lake producing a handful of starfish and clam shells.

Expecting accolades, he was crestfallen when the crowd accused Lake of planting the creatures on board prior to the dive.  Lake’s uncle Somers Champion took over.  He persuaded the Mayor and council members to sign a shingle and throw it into the harbor.  Once again, the little boat submerged, and a while later surfaced with the single.  The crowd cheered.  The press dismissed the demonstration as a publicity stunt.

In the end, Simon did not win the navy contract.  However, he is responsible for over 200 submarine-related patents.  He designed and sold his submarines to both Russia and Germany and, eventually the US Navy.

Simon Lake is credited with the development of groundbreaking submarine technologies for the safe and successful operation of submarines. These technologies include even-keel hydroplanes, ballast tanks, divers’ compartment, the periscope, and the double-hull design. He also was the first person to take a photograph and the first to film a movie underwater.

Lake became a wealthy industrialist and moved to a large house in Milford, Ct.  This is where the story should end with the sentence “and Simon and his family lived happily ever after.”  But Simon became obsessed with the wreck of the HMS Hussar and her lost payroll.  His submarines would find Hussar and salvage her cargo, he told the New York Times.

In 1934, Lake began his quest for Hussar in the East River.  He worked Hell Gate in his submarine for two years.  And then the money began to run out. He was sued by a deckhand for, ironically, back pay of $394.  One afternoon, Simon called reporters to his office. “If I were a betting man, I would lay 100 to 1 the Hussar has been found at last. For fifty years I have been speculating on the likelihood of locating this ship and within six weeks I expect to step within her hold. Now, nobody can tell what gold there is. It’s not the gold so much as the satisfaction of solving a riddle, though some gold would do no harm.”

On September 4, 1936, Simon Lakes 70th birthday, he, apparently,  found the Hussar.  His auger-like probe came back with wood and chalk embedded on its coils.  But it was not to be.

He was sued again.  This time his house was in foreclosure for the sum of $1800.00.  He lost his house in November of 1937.  In his autobiography, Lake said “No one now knows precisely where the old hulk rests, and my explorations early in 1937 were unsuccessful. I have not given up the idea, but other things are more pressing.”

Fate can be cruel.  Simon Lake passed away on June 23, 1945. He never got to officially find the HMS Hussar.  His obituary read:

By the Associated Press.

Simon Lake. father of the modern submarine died tonight in ‘St. Vincent’s Hospital here after a brief illness. He was 78.

Simon Lake’s inspiration for developing the modern submarine came directly from Jules Verne’s “Twenty Thousand Leagues Under the Sea.” which Mr. Lake read avidly when he was a boy of 10.

He kept thinking about submarines. and doing something about them, almost to the end of his life. He never lost faith that watercraft would be used as instruments of peace.” 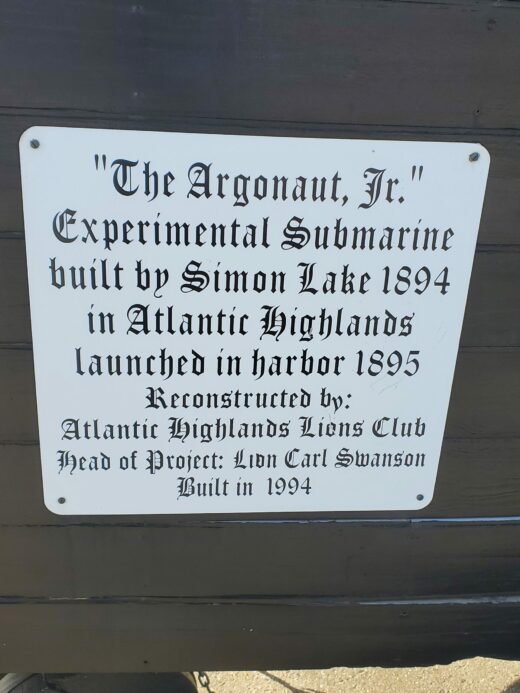 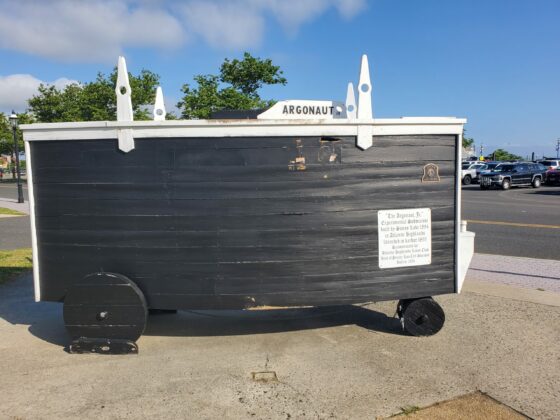 Bart Champion might have been correct when he told Simon that he thought him mad.  But you decide.

“A dreamer is one who can only find his way by moonlight, and his punishment is that he sees the dawn before the rest of the world. Dreams have only one owner at a time. That’s why dreamers are lonely. The dreamers are the saviors of the world.”

Share
Facebook
Twitter
Email
Print
Previous articleHelp For Older Adults On A Budget May Be A Few Clicks Away
Next articleHeading To The Beach? Bring A Meal From Fresh Kitchen With You!

Home Of The Week- Stunning Retreat With Resort Style Backyard!