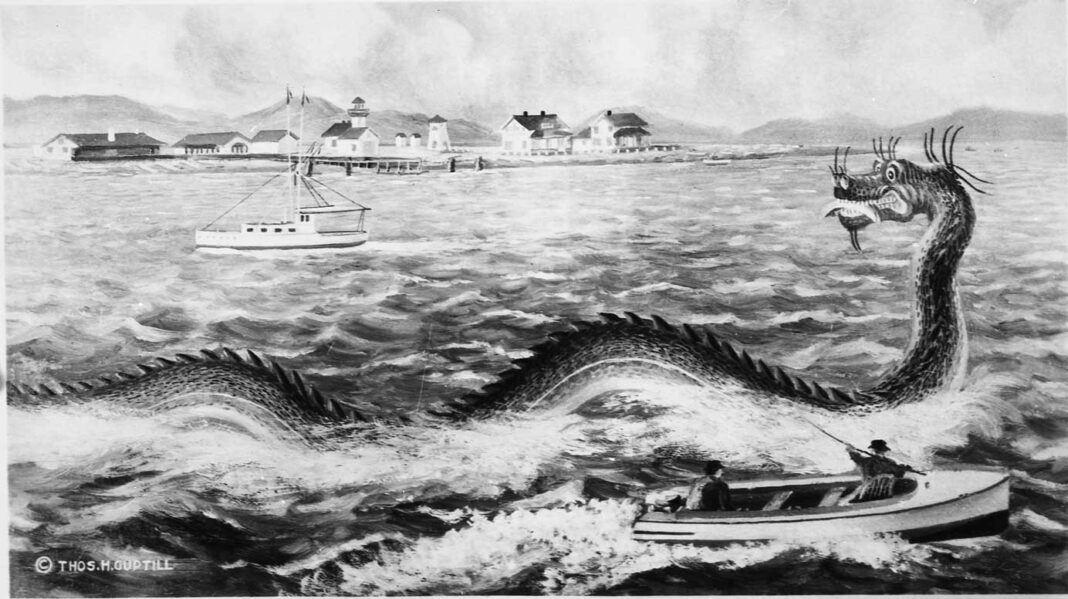 It was 1879. The Sandy Hook Life Saving Service was finishing up their rounds, cruising the beaches of Sandy Hook in their surf boat. All was quiet and the Atlantic was calm. The boat stopped suddenly because right off the bow, the men of the Life Saving Service saw a hideous sight. In front of them was a serpentine creature. It was huge, at least 50 feet in length and almost 7 feet in girth. It had two horns protruding from its bulldog-like head and saucer-sized eyes. It raised its head from the water and gave out with a storm-loud roar. The men didn’t waste any time. They rowed to shore like men possessed. Later, when each terrified man was interviewed individually, their stories matched. The witnesses were so credible that a team of scientists were dispatched to try to determine what sort of creature the men had seen. 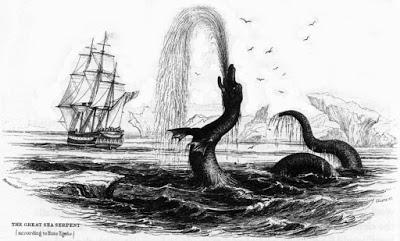 Their hasty conclusion was that it had been a giant squid.

The giant squid is widespread, occurring in all of the world’s oceans. It is usually found near continental and island slopes from the North Atlantic Ocean. The depth range of giant squid is incompletely known, but data from trawled specimens suggest it spans a large range of depths, possibly 980–3,280 ft. The average depth near the shoreline of Sandy Hook is about 20ft. The bay and river are similar in depth. Hardly within the depth range of
a giant squid.

It was a warm summer evening, about 10 PM in 1889. Several Red Bank businessmen, Marcus P. Sherman, Lloyd Eglinton, Stephen Allen and William Tinton, had spent the day on the water and had picnicked at Highland Beach on the Bay side of Sandy Hook. The full moon was exceptionally bright that night making navigation easy. The yacht, Tillie S., with Sherman at the helm was entering the Shrewsbury River when Lloyd Eglinton, at station on the bow as lookout, cried out “There’s something in the water! Hard to Port!”. Sherman swung the wheel to avoid a collision with the unknown object. The men ran to the bow to see what they nearly hit. It was huge and undulating. The creature had to be 50 feet long and 6 or seven feet in diameter with huge eyes like saucers and a horned bulldog- like face. Serpentine in shape it swam with snakelike movements through the water. Its head rose from the water, and it roared. Bristles adorned the upper lip of the monster, and its nostrils were quite large and flattened. The long body tapered to a sharply pointed tail. The men stared in shock as it slowly swam toward the shore of Hartshorne’s Cove. That night more than 12 boaters saw the creature and they all knew that they were looking at the Sandy Hook Sea Serpent.

Since that first sighting by the Lifesaving Service some two years ago, there had been numerous sightings of the beast, all by credible witnesses. One thing was certain. The likelihood that this was a giant squid was highly unlikely.
In 1967, the Asbury Park Press interviewed 84-year-old Rube Corlies. In 1906, he was a fisherman. He and his brother-in-law were gill net and fishing off Long Beach Island. He told the story of seeing what seems to be the same creature spotted years before off Sandy Hook and in the Shrewsbury River.
While they were pulling in their nets, his brother-in-law noticed that the moss bunkers that they were catching were acting oddly, swimming in all directions as if frightened. Suddenly a giant snake-like animal reared up out of the water to a height of approximately 15 feet. It had a shiny black back and a white flabby belly and a bulldog-like head with eyes “as big as your hat” and was about 40 feet long and 6 feet wide. The creature stared at the men in the boat for several minutes until one of the men released the net freeing the bunkers. The creature dove after them. 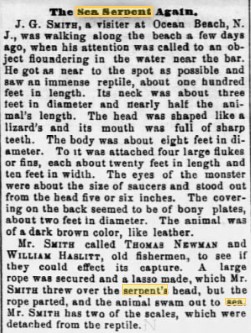 The incident was also observed by the crews of 3 other seagoing dories. In 1963, Dr. Lionel A. Walford, the Director of the United States Fish and Wildlife Research Center (operated by the Department of the Interior at Sandy Hook) saw the creature himself, undulating near the surface in a manner of the fabled sea serpent. This creature, however, was like liquid glass with no discernable eyes or features and while 40 feet long was flat like a giant tube worm.

In the 1980s a fishing family from Highlands found themselves going further and further out to sea off Sandy Hook to find their catch. On this particular day, they were hunting scallops. All of a sudden, next to their boat they saw a giant. Judging the creature’s size by that of their vessel they determined it to be nearly 100 feet long and about 6-7 feet in girth. It had a small-sized head that resembled a bulldog with very large eyes. They had seen it many times before and had heard its vocalizations. It roared. And these fishermen were not the only ones in recent times to see the Sandy Hook, or Shrewsbury River Sea Serpent as it was also now called.
In the 1990s a surf caster on the ocean side of Sandy Hook, standing in 3 feet of ocean water saw a large undulating movement in the water. He thought nothing of it. Then came a searing pain in his calf. Struggling out of the water, blood pouring from his wound, he saw that a large section of his calf was missing, torn right off. He survived, but never ventured into the ocean ever again.
We like to believe that we understand our world and that we know what lives in the sea and the rivers, or in the forests. This belief comforts us in the face of our primordial fear of the unknown, the noise we hear in the darkness and that distant sound of thunder. The truth is that we never know what is really out there beyond the circle of our lights. New Jersey has its share of cryptid sightings from times before the first Europeans landed on our shores.

There is “Big Red Eye,” a Sasquatch type of being seen near High Point, NJ, or Wemategunis (Wood Dwarves) near Glassboro as well as the Jersey Devil and the Sandy Hook Sea Serpent.

While it is easy to be quick to dismiss these stories by the light of day as fables, at night we tend to walk a little faster when we hear an unfamiliar noise or see a unique shadow. If you find yourself on the water near Sandy Hook and you hear a large splash or disconcerting sounds like what seems to be a growl or roar, better get to shore if you can or the Sandy Hook Sea Monster just might get you.
Happy Halloween!
Jack