Shipwreck! The Death Of The New Era: Part One 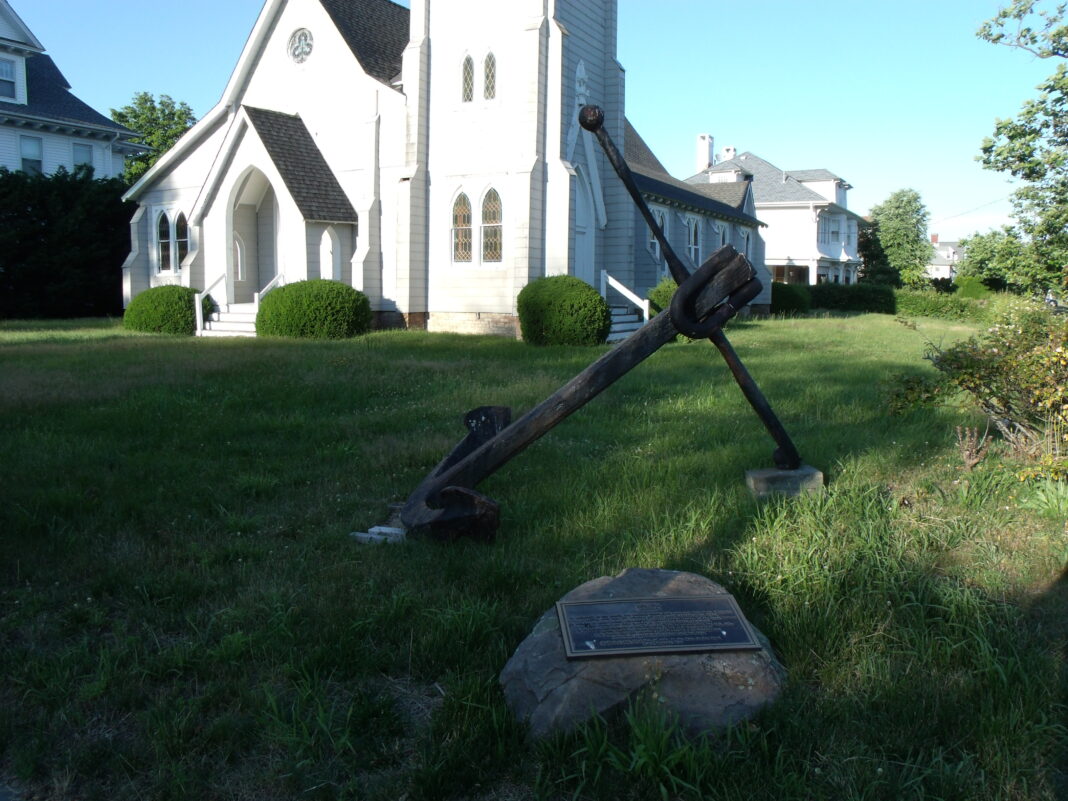 “Lunch was made an hour ago.  The young mother knew that Fort Hancock, at the tip of Sandy Hook, NJ was a busy place during wartime.  It was also one gigantic playground for her son.  At first, she was angry, but anger faded away to worry. Her son was never late for lunch.  Just then, the kitchen screen door banged shut and her son yelled “Mom! Come look at what I found!”  She entered the kitchen and stifled a scream.  Her son was holding a dirt-covered human skull.”

This is a popular bit of folklore that was part of Ranger-guided tours at Gateway National Park at Sandy Hook.  It is based on a true story.  There is a long-abandoned baseball field near the lighthouse.  Numerous corpses washed ashore near thereafter a tragic shipwreck in the 1850s.  The bodies, today, lay buried and forgotten in an overgrown field due to the potential presence of unexploded ordinance from the days when Sandy Hook was a proving ground.

It was November 13, 1854, 06:10 Hrs.  The gale-force winds rattled the windows of Deal Beach residents (now Asbury Park, NJ) all night long.   This morning, the incessant, staccato clatter of a ships bell drove the townspeople from their beds to the beach at what would become the foot of 7th Avenue.  Through the fog, they saw her.  500 yards off the beach sat the New Era, a large sailing ship, stuck hard and fast on the outer sand bar with her full sails still set. 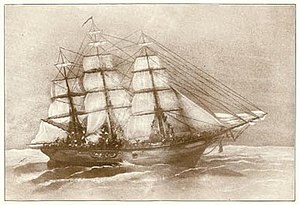 As dawn began to break, a series of gigantic waves lifted the ship high off the outer bar, tossing her about 150 yards from the beach.  A shift in wind direction and the coastal current spun her hard around so she sat broadside to the shore, bow facing south and completely vulnerable to the heavy seas.  Waves began crashing over her decks as high as the first yardarm, flooding her quickly.  She sank in less than an hour.  As the fog lifted, onlookers were stunned.  In the New Era’s rigging clung nearly 400 souls, holding on for dear life in the freezing cold, buffeted by wind and water.

The New Era was a brand-new ship.  This was the second leg of her maiden voyage.  She carried 600 tons of chalk, 20,000 cubic feet of “general merchandise” and 385 German immigrants on their way to Pennsylvania by way of New York City.  The crew consisted of 29 seamen, 12 cooks, a ships doctor and the Captain, Thomas J. Henry.  She was built in Bath, Maine by H&R Hitchcock.  Henry & Rufus Hitchcock, along with Captain Henry, owned the New Era.  In 1854, the cost of building the New Era was about $60.00 per Ton, equating to $79,680.  She was not insured by Lloyds of London, but by 9 small insurance companies, with coverage in different amounts totaling $91,000.00.

The ship seemed plagued with problems.  Just a week out of Bremen, Germany, some 40 passengers died of Cholera and were buried at sea in the middle of the night, so as not to alarm the rest of the passengers.  Additionally, New Era sprung leaks during the stormy crossing. She was flooding so badly that passengers had to work with the crew to keep the manual pumps running 24/7 for 41 days.  This seems an odd occurrence for a new ship.

By daylight, lifesaving volunteers, John Slocum and Britton White arrived on the scene with a surf boat, lines, and a rescue mortar.  The seas prevented them from launching the boat.  At that point, the wind shifted and swung the spanker boom across the deck, sweeping nearly 100 passengers overboard to drown in the wild seas.  The volunteers fired their mortars again and again, to get a line out to the stricken ship.

Each time, they failed to hit the mark as the wind would send the line careening off course.  As the volunteers worked onshore, a group of sailors lowered a boat from the ship to attempt to tow a line to shore.  The first and second officers and 3 crew members cast off the line and rowed to shore to save themselves.  An additional boat was lowered, but the crew that manned it, again, severed the line and headed to shore.  Next, the longboat was lowered by 6 crew members.  As they bailed the boat to get ready to save as many passengers as they could, the ship’s physician, Dr. Papenhausenn, who had gathered up as much of the passengers coinage and valuables as he could stuff in his clothing, leaped into the longboat.  The weight of his plunder capsized the longboat and he was crushed between the boat and the ship by the wave action. He was never seen again. 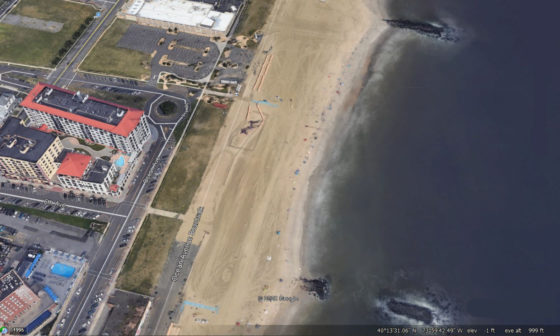 The mortar sounded again, this time the line landed in the rigging and Captain Henry retrieved it and made it fast.  He ordered crew members to bail out the last remaining boat.  When it was free of water, the Captain jumped overboard and was lifted by the crew into the boat.  Passengers then leaped overboard and attempted to get on the boat but were beaten back by Captain and Crew.  All drown but 4 that managed to get into the boat.  The shore party began to haul the boat ashore, but it capsized 3 times.  In the end, only the Captain (an owner of the New Era), 3 crew members and 1 passenger made it to shore alive. 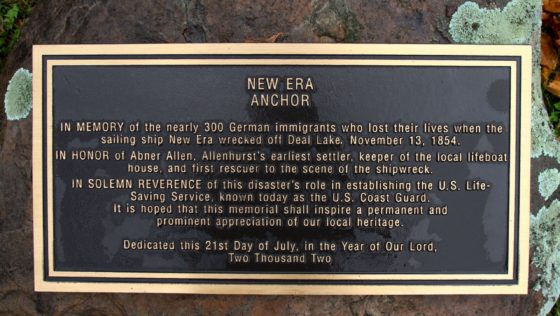 The rescue attempts went on until nightfall.  The gale quieted and all that could be heard was the wailing of those poor souls in the ships rigging crying for help.  The following day, a boat was launched and picked up the 135 remaining survivors.  Some 142 unidentified bodies were buried in potters’ field behind the Old First Union Methodist Church in West Long Branch, NJ.  The rest of the dead disappeared into the sea.  Bodies followed the currents only to be thrown upon the beach at Sandy Hook.

In 1893, a monument was erected at the foot of 7th Avenue on the boardwalk.  It was adjacent to the wreck site and memorialized the dead.  It also disappeared during a gale. 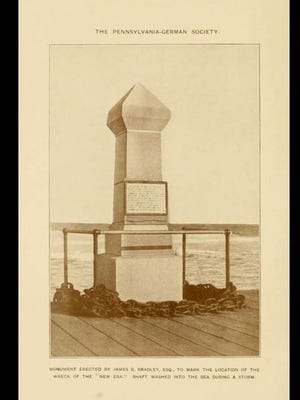 The cemetery, where New Eras dead are buried, is massively overgrown and the Monument to the passengers is, like all the other stones, neglected and difficult to find despite its size.  This is where the story of New Era should end, in this long-forgotten graveyard.  But there are too many questions left unanswered about the wrecking of the vessel. 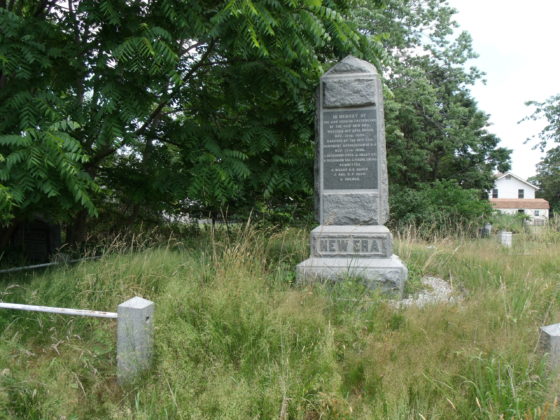 New Era was supposed to be a new ship (7 months old when she died) on her maiden voyage.  Why, then, did she spring leaks bad enough that the passengers and crew needed to man pumps 24/7, only a week out of Germany?  Was the New Era really a new ship, or was she an older, tired vessel meant to end up on a beach somewhere to pay for H&R Hitchcock’s new 1400-ton ship?

The captain’s testimony differed greatly from that of the passengers and interviewed crew members.

Then there is the cardinal sin when sailing in bad weather:  The New Era was under full sail in a gale when she grounded.

Further, a crew member testified that Captain Henry ran New Era reefed until shortly before she came ashore.  What was the reason for this?

It will take a great deal of research to answer these and other nagging questions about the death of the New Era and her passengers.

(Note from Jack Grodeska:  After seeing the mass grave and its disgraceful state, I could not leave it like that.  I have reached out to several German ethnic organizations to find someone to maintain the grave.  This is, as yet, unresolved.  Sometimes when you write a story, you become entwined within the story. Such is my relationship with the wreck of the New Era.  My investigation will continue.  I have submitted a FOIA request for the financial records of H&R Hitchcock, as well as the name and information on the second ship built in 1854.)