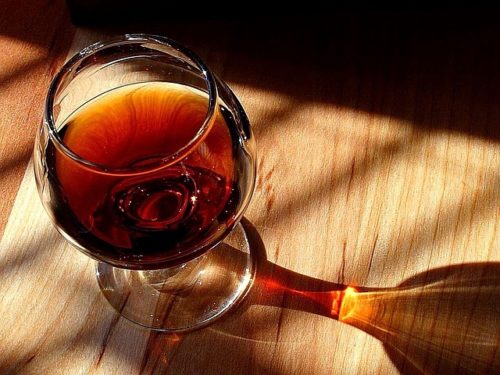 When someone says any Port in a storm, thoughts immediately turn to a Ruby Port and a cozy fire. 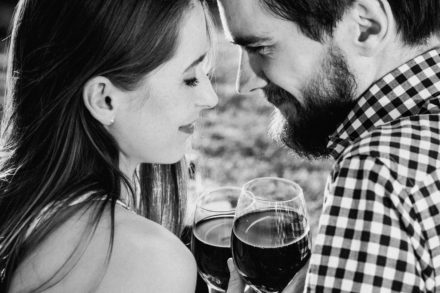 There are many different official categories of Port with Ruby being the most common.
Ruby Port gets its name for its distinct ruby color. These Ports are young, approachable wines with fresh, fruit-filled aromas and an equally nimble palate presence. These wines are wallet-friendly, entry-level Ports, made from a mix of both grapes and vintages, aged for a total of three years and are quite popular.
These Ports are intended to be consumed young and enjoy a remarkable food-pairing versatility, especially with bleu cheese, milk chocolate, and berry-based desserts. Non-vintage Ruby Ports are actually sent to age for a few years in a wood vessel, then bottled for immediate drinking, resulting in juicy, fruity ports that are also great as aperitifs. Some good Ruby Port producers include: Cockburn, Croft, Graham’s Six Grapes, Nieport, Taylor Fladgate, and Warre’s.
Deeply-colored Ruby Port includes four main categories: Ruby, Vintage, Late-bottled Vintage (LBV), and Crusted, along with many price tags. And do make great holiday gift ideas.

Vintage Port is at the top of the range where price, aging potential and prestige are concerned. It’s made only from the best grapes of a single vintage, and only in years that have been “declared” vintage-worthy, which usually happens just a few times a decade. Beyond that, the wines are made similarly to other Ports, fortified with spirits to arrest fermentation and preserve residual sugar. Vintage Port sees only two years of aging at the winery before each producer decides on its own whether to declare a vintage. Because the wines are so young upon release, they are usually tucked away in cellars for many years until they mellow and mature into their potential. 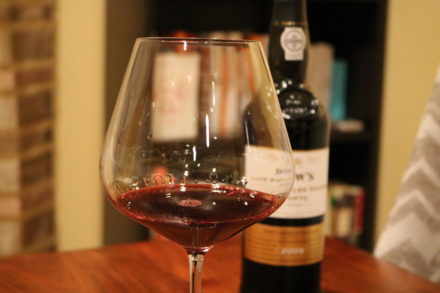 “Late-Bottled Vintage” or “LBV” Ports aren’t bottled until up to four to six years from the vintage date. Late means that, unlike true vintage Port (aged two years before bottling and released to be aged much longer), producers release LBV four to six years after the vintage This means they spend about twice as long in wood as Vintage Ports, and so they’re usually more accessible at an early age. Some producers cold-stabilize and filter their LBVs, which is supposed to eliminate the need to decant the wine, but that can strip away the flavors. If you’re looking for LBVs made more like Vintage Ports, look for the word “Traditional” on the label. LBVs were originally intended to offer an experience comparable to Vintage Port but at a much lower cost. Many deliver the goods, but some of them can be just shadows of the real thing.
LBV Ports are also differentiated by style and each producer leans toward a particular style, os if you are looking for something young and fruity, ready to drink, select Cockburn’s, Càlem, Ramos Pinto or Sandeman. If you want something more mature, wood aged, and ready to drink now, look for: Churchill Graham, Dow’s, W & J Graham and Taylor Fladgate. If you want to give a commemorative gift, one that’s truly worth aging, look for the following brands: Ferreira, Fonseca, Smith Woodhouse or Warre’s.
Crusted Ports are not made from wines of a single year but, like Vintage Ports, are capable of maturing in bottle. Also like Vintage Ports, they are not filtered before bottling and will form a ‘crust’ (natural sediment) in the bottle as they age.
When you are cooking and your recipe calls for Port, remember most recipes call for the affordable Ruby Port. This style is red and will impart red berry and cinnamon-like flavors into your sauce. You do not need a Vintage, LBV or Crusted Port when cooking. Remember, a true Portuguese Ruby Port may cost $6–10 a bottle, but will last a long time. If you don’t want to use your bottle for cooking (we understand that!) You can, in a pinch, use two parts dry bold red wine, one part alcohol (brandy or vodka) and about one-quarter part sugar. It won’t be ideal, but better than just using red wine!
Once opened, a Ruby-style Port will stay fresh for about 2 weeks (a month if preserved properly in your fridge)

Tawny Port
Tawny Ports are aged in casks rather than large tanks or bottles like their Ruby counterparts. They are sweet wines with oxidative nut and caramel flavors, great acidity, easy to drink, silkier and lighter (in both body and color) than Vintage Ports. Tawnies can sometimes offer a broader, subtler array of flavors than their fruity and powerful Vintage Port relations, but both are connoisseurs’ wines. 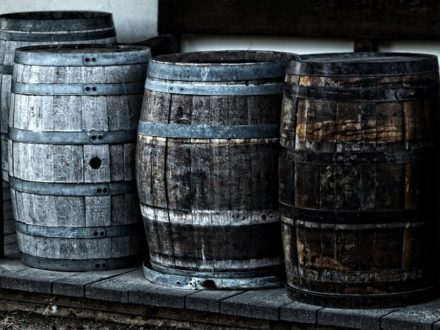 Tawnies, like all Ports, are made primarily from Touriga Nacional, Tinto Cão, Tinta Barroca, Tinta Roriz and Touriga Franca grapes, grown on the dramatically vertical slopes of the Douro River. They are produced, as all Ports are, by stopping fermentation with the addition of brandy. The only difference between Tawny Ports and Ruby Ports is in the longer aging in barrel—a Tawny may age for decades. A Tawny that is aged in the hot, dry climate of the Douro Valley is more likely to have a burnt character, rather than the more fruit-driven style of the wines aged in the cooler, moist air of Oporto right by the ocean.
A Tawny Port is a blend of older vintage wines, displaying a rich amber color. Their distinguishing feature is oxidation. Tawnies are typically slightly sweeter. Tawny Ports are paler and browner than traditional Ports. They have a mellow, nutty, slightly woody, dried-fruit character, derived from contact with air during long maturation in porous wooden casks. As a tawny port spends more time in oak, its color starts to fade from ruby-red to more orangey-brick, to a deep amber/mahogany color at maturity. As the aging process continues, a Tawny’s taste will become even more nuttier and it develops deliciously rich flavors of caramelized figs, dates and prunes. The older the Tawny Port, the more wood character you’ll get, which is why Tawny Port (as opposed to vintage) is the more intense differentiation—woody, sweet, with notes of lighter dried fruit.
These wines pair beautifully with aged cheddar cheese, caramel apples or apple pie, dried fruit, milk or dark chocolate, cheesecake, tiramisu, pumpkin or pecan pie.
There are two major types of Tawny: the first is a blend of several recent vintages with no specific statement of age – known as basic Tawny Port. The second consists of older-aged Tawnies, marked as 10, 20, 30 or 40 years.

Tawny Ports come in three different styles: Colheita, Crusted or Indicated Age.
A Colheita Port is considered a Tawny Port that is made from grapes that all share the same single vintage year, and may have spent 20 years or more in barrel before it was released.
A Crusted Port is an unfiltered tawny that develops visible sediment, “crust,” and needs decanting before serving.
Tawny Ports that are made from grape blends that are older in average age are referred to as Indicated Age Tawny Port. Aged Tawny Ports are released in 10-, 20-, 30- and 40-year-old versions (the age refers to the time spent in wood). The tricky thing about tawnies is that you never know how old they really are. When applied to Tawny Ports, the terms “10-year-old” and “20-year-old” are not intended to denote exact age. These year designations are the average compilation of various vintages used in the Tawny Port blend, not the exact years the wine has been aged as a whole. That’s not to say that you can’t tell the difference between Tawnies that are labeled 10-year-old and those that are 40-year-old. Tawnies of different ages do have distinct characteristics. Some people prefer the younger, more fruity style of 10-year-olds, while others want less fruit and more complexity. During aging, there is an evaporation of alcohol and water, so that the older the Tawny, the more concentrated it is, and the intensity of flavor becomes greater. Most Tawny lovers prefer the 20-year-old, believing it strikes the right balance between aged character and vitality.
The most drinkable of fortified wines, they’re packed with flavor, but are always soft, rich and seductive. For many Port lovers, the idea of drinking chilled, aged Tawny is good news, as chilling helps open the flavors. Try keeping it in the fridge door or put the bottle in an ice bucket for 20 minutes before pouring.
Another of the many pleasures associated with aged tawny is that the bottle, once open, doesn’t deteriorate for several weeks and can stay fresh for as many as three months. Keep wines longer by storing your wine in a cool dark place and using a vacuum preserver to remove oxygen.
When buying Tawny Port look for the following producers: Cockburn’s 20 Years, Dow’s 10 Year, Graham’s 20 Year, Taylor Fladgate’s 10 Year, Warre’s Otima 10 Year. Happy sipping!
Rosé Port
The style is one of the newest in the demarcated region of the Douro, in northern Portugal, and was introduced by Croft in 2008. When it was first released the IVDP (Instituto dos Vinhos do Douro e Porto) initially classed the style as “light ruby”. As the name suggests, Rosé Port is a highly aromatic style of Port with a a distinctive pink hue and typically displays notes of cherry, raspberry, strawberry, violets and caramel. 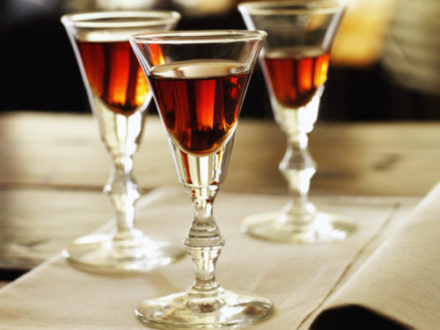 Like other Port wines, Rosé Port can be a blend of grape varieties. The most commonly used, however, are Touriga Franca, Touriga Nacional, Tinta Roriz (Tempranillo), Tinta Barroca and Tinto Cão. These are vinified with minimal skin contact, creating the rosé color, and reducing the amount of tannin in the wine.

Rosé Ports distinctive freshness and soft, pleasant flavor is enhanced further with the application of cold settling prior to cool fermentation. As with other Ports, the fermentation process is halted with the addition of high-proof grape brandy that kills the yeast cells. This also has the added effect of raising the alcohol strength to approximately 19 percent ABV. In a departure from older, more traditional Port styles, Rosé Port is not aged.

Served cold or with ice, it goes well with dried fruits, something sweet or a red fruit tart. It is a great appetizer accompaniment and is nearly irresistible with light fish dishes or salads. It is also an ideal partner to savor in various cocktails on hot summer days or cozy winter evenings.
Rosé Port should be stored with the bottle in a vertical position, in cool and dry place (ideal temperature 59º F).
Rosé are wines that should be consumed within two to four months after opening the bottle,.These wines should, by their character, be served cold, at temperatures between 46° and 50° F, or with ice. Try this young and unique wine – a real temptation. It also makes a pretty gift!